The Moon Is a Harsh Mistress - Book Report

My New Year’s resolution this year is to read one book a month. I know for many of you this is easy and not worth a resolution. I read a lot of screenplays each year and work by writing, so more text isn’t actually that relaxing for me. So since I’m going through this hard work, I decided to do book reports. This is my February book. I'll go back and do January's report soon. 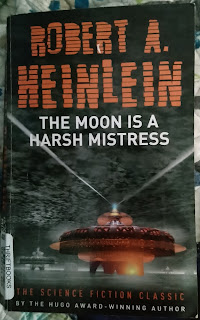 Designed to be a prison camp, the colonies on the moon have evolved into something bigger. The tunnels of the moon are used for farming and because of favorable gravity, shipments of grain are sent from the moon to the earth to feed overpopulated cities. It isn’t only prisoners on the moon now, though. Spouses and children of prisoners were allowed to go with them. And after a hundred years of sending people to the moon, many of the residents were born free, but as citizens of the moon. Everything there is controlled by the prison guards and the company they work for, Lunar Authority, though.

One supercomputer controls almost all operations on the moon, on Luna. A Holmes computer, which because of regular expansion of its memory and processors, has become sentient. The only person who has noticed the computer is “alive” is a Luna-born computer technician named Mannie, or Man, who is sent to repair the computer whenever it malfunctions. Man has named the computer Mike, short for Mycroft Holmes, Sherlock’s older brother. The computer malfunctions are usually Mike trying to be funny and not actual errors.

Perhaps manipulated by Mike, Man is thrown into the world of Luna’s underground rebellion. The citizens of Luna want to be free. With the help of two revolutionaries, Wyoming Knott (Wyoh) and Professor de la Paz (Prof), Man and Mike join the fight and help sway the odds in favor of the Lunatics in the fight for their lives and livelihoods. Mike eventually develops many different personalities, but they are of little consequence. They can all be thought of as Mike.

It sounds great. But this is one difficult book to read. The story is told from Man’s point of view, maybe as many as 60 years after the fact. And because Man was raised by people exiled from Russia, he speaks in the way one imagines a stereotypical Russian to speak. Here’s a sample sentence from the book:

Was comfortable lounge with own bath and no water limit.

It would be easier to read with more words:

There was a comfortable lounge with its own bath and no limit to water use.

Maybe no the optimum example from the novel, but the first one I found opening it up. The whole thing benefits from having the voice in your head speak in a Russian accent. I don’t think I could have gotten through it without hearing the text in a Russian accent. And there are Russian words scattered around here and there, just to drive home the point.

The author also gets really hung up in explaining relatively unimportant ideas in relation to the overall plot. Because the population on Luna is 2:1 male to female, most people live in clans with polygamist beliefs. Man has many “wives” and “husbands,” who live together, raise children together, and work on their farm together. The explanation of how this all works out is tedious and I will admit, I don’t think I read every single word about it.

Similarly, I glazed over a bit when the description of how the information cells in the rebellion were structured. Mike on top, with a pseudonym starting with A (Adam Selene), Man, Wyoh and Prof below, with pseudonyms starting in B, each controlling a cell of 3 with pseudonyms starting in C and so on. I think this went on for pages! And look, I’ve covered the basics in one sentence. If you encountered someone whose pseudonym started in F, you would know he was in the sixth level, and exponentially you could figure out there would be 243 people on level F.

Some things in the description didn’t match with how I pictured the story in my mind. The cities on the moon are all underground, but when they are first introduced my mind drew them as more enclosed in domes, built on multiple levels, not necessarily underground. And as some point I think Man is described as wearing tights and having a bare chest. The farmer and computer technician of Man (who has one artificial arm) looked more like a farmer or computer technician, in coveralls or a boiler suit, in my head. I had trouble picturing him as bare chested. I also had trouble picturing a 40-year-old man as 20, because aging on the moon is very kind. Lunatics live into their hundreds regularly, and because the colonization of the moon isn’t very old, no one is really sure what the average life-expectancy on the moon might be. I pictured Man as a one-armed Jason Statham in a boiler suit with a thick Russian accent. Wyoh? Gwendoline Christie. Prof? Antonio Banderas.

It was interesting that Luna had a strict code of ethics, which needed little to no police supervision. If you got out of line with someone, murder is extremely easy on the moon. And it is already a prison. As a result, people behave and are courteous. And because women are so outnumbered, they are treated with greater respect (although whistled at constantly and written to enjoy it). The kick-off of the revolution actually happening, after years of planning, is when the prison guards rape a woman, violating one of the most sacred codes on Luna.

Overall, I do think this would be a good adaptation for a mini-series. Too much going on for a movie. But I don’t recommend that anyone read the actual book.

Somehow I got a UK copy of the book, although I didn't notice any spelling issues aside from all the Russian. 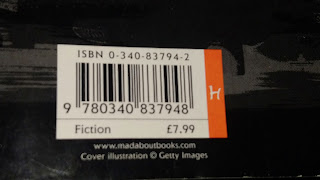 And I should mention that TANSTAAFL (There Ain't No Such Thing as a Free Lunch) is the slogan of the moon, and mentioned with some frequency in the book. But that's a different book report.

Posted by Camille Sharon at 3:22 PM