In the near future, which ironically already happened, January 3, 2021, the world is a different place thanks to World War Terminus. Not a lot of details are given about the war, but it becomes clear that most life, not just human life, has been wiped out on Earth. Most people have left Earth and live on one of the colony planets, where androids (which are nearly indistinguishable from people) are used as slaves. 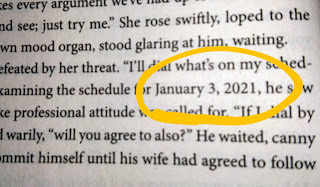 If you remained on Earth, you would be lucky if you aren’t affected by the radiation which has poisoned everything. Most people start to deteriorate mentally after too much exposure, and then become ineligible to travel to a colony. But some people just don’t want to go. Like the hero of the story, Rick Deckard.

The androids from the colonies are sentient enough to realize they are slaves, and to want better lives. Because of this, many of them travel to Earth illegally and attempt to blend in with the people. Rick’s job is to hunt these androids and kill them.

When he gets an assignment to hunt down the most advanced version of androids yet, he jumps at the opportunity. An opportunity he only gets because the original (better) bounty hunter has been hospitalized from his encounter with one of these androids. Rick desperately wants the extra money because owning a pet on Earth is now a status symbol, since most animals are dead. And Rick and his wife, Iran, didn’t manage to keep their pet sheep alive and have replaced it with an electric one. If the neighbors found out they were keeping an electric sheep, they would be humiliated. With the extra income from these bounties, Rick hopes to buy an ostrich, despite the exorbitant cost of $30,000.00.

Meanwhile, a man named J. R. Isidore lives outside of the city in the wastelands. The suburbs of the city are filled with abandoned buildings from the mass exodus of people from Earth. Isidore’s brain has started to decay. He lives alone in a high-rise apartment building and doesn’t have a pet. He works undercover for an electronic pet repair shop which is disguised as veterinary services, picking up malfunctioning animals. Unfortunately, he does pick up a real cat and mistakes it for a fake one, hastening its death. He becomes a refuge for one of the escaped androids, Pris, who moves into his building and eventually brings two other androids along.

Rick’s hunt brings him out into the country, crossing paths with Isidore. They each also have weird religious experiences with the Christ-like figure Mercer. Mercer seems to have been created to provide humans with one of the things the androids are incapable of - empathy. But it isn’t entirely clear if Rick’s and Isadore’s experiences with Mercer are real or imagined. Is Mercer real? Is he an actor? Is he an android?

The writing is brisk to the point of feeling like details are missing. I’m so used to fight scenes (in movies) being drawn out, lasting far too long for the people fighting to still be standing, that it was jarring to read a fight scene which started and concluded in just a couple of sentences. I had to go back and read a few paragraphs a second time to make sure I wasn’t missing something. I wasn’t. There wasn’t more. Like if someone was shot in the head, they were shot in the head and dead and the story moved on to the next thing immediately.

For serious animal lovers, you might want to stay away from this one. There aren’t many animals in it, and yet most of them do not have pleasant ends. The androids embody all of humanity’s negative aspects (greed, jealousy, anger and hostility) but they don’t have any of humanity’s positive emotions (empathy, love), so they don’t value life, human or animal, the same way as the humans remaining on Earth do.

Do Androids Dream of Electric Sheep is a short, easy read. If you are looking for Blade Runner, you don’t get much of it here. Although it’s been a long time since I’ve seen Blade Runner, I don’t remember many of the main elements of the novel in the film. Was Rick married? Did he have an electronic pet sheep? Did he want to buy an ostrich and eventually buy a goat? Did Pris look identical to the other android Rachael because they were the same model? Did Rachael fully know she was an android? I don’t think any of these things were included in the movie. And I don’t think the whole religious, Sisyphus and Christ-like Mercer was in the movie at all.

I wasn’t reading it expecting it to be Blade Runner. I was reading it to read it. But it is impossible to read it and not compare it to the movie as you go along. If you are looking for Blade Runner, or if you love lush prose, then you should skip this one. But if you are curious, then I would recommend reading it. 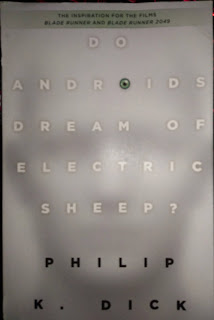 Posted by Camille Sharon at 3:35 PM