Ruth Allen's Sunrise Around the World

If you didn't know, I've been going with some friends of mine to sing/entertain at an assisted living center every Wednesday afternoon for several years. We weren't able to go there during the original COVID-19 lockdowns. When they had to go back into lockdown from Omicron, we decided to start live streaming our singalong so they could still have some entertainment. Here's the one we did last week:

Posted by Camille Sharon at 6:43 PM No comments:

Starting Off 2022 With a Painting

I got some oil pastels for Christmas. Not exactly as a surprise, since they were on my Amazon wish list. I have done a lot of paintings with soft/chalk pastels, but I wanted to try the oil ones. VERY DIFFERENT! 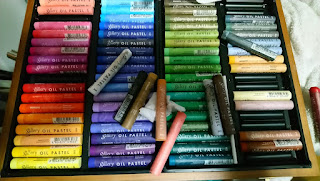 Anyway, someone I’m friends with on Facebook posted a picture of their cat last year that I thought would make a good painting, so that’s what I did as my first oil-pastel trial. Here is Jasmine. 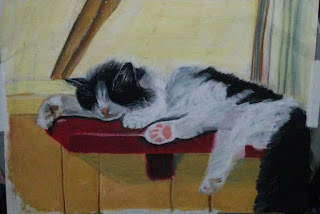 Posted by Camille Sharon at 5:55 PM No comments:

Happy new year! It’s today! Today! The first day of a new year. You may not know this about me, but I like to set a yearly challenge for myself. I don’t think of it as a resolution. It isn’t vague like “be healthier,” or “be more connected with family.” It is something a little more specific. Often, I ask myself to do one thing a month, like last year’s “read a book each month,” which by March changed into “consume a book each month,” since, turns out, I absolutely hate reading. I finished out the goal by listening to audiobooks. It was still a challenge for me and I’ve not listened to an audiobook in about a month, since finishing up my December book early - in November.

One year I did a painting a month. Toward the end, they got to be a little simplistic, but I did them. One year I was going to record a song each month, but my mom got really sick and life interfered with my ability to learn and/or write songs. One year it was “say yes to everything,” which didn’t mean everything, but I said yes to anything I thought might be remotely fun/interesting to do. I went to a lot of shows at Largo that year and have some great memories, but again, there were a few tickets purchased that I ended up not using. Something can sound like a great idea in one month and sound like a not great idea when the day comes.

Well, the pandemic makes a “say yes to everything” year a bad idea. And even though I’d love to set a goal involving travel or going to places, that would just be setting myself up for failure this year. Maybe for 2023 I can do that. After last year’s monthly goal, I don’t want to do that again, at least not right away. So instead, I’ve come up with a little list of 2 things I’d like to accomplish by the end of the year. They are things which will require putting in some work, so not something I can wait until next December to do. Here we go:

1.      Learn how to properly record a song, probably in Audacity, with multiple tracks. I’m only planning one song here, a song I started writing in 2015 when my dad died and my mom got really sick. I want to finish it and do a semi-decent recording of it and not just a “put the phone on the piano” version.

2.    2.   Learn how to draw a cat. It doesn’t have to be a lifelike cat. It can be cartoonish, but a little bit better than the wonky stick figure cat that would happen if I tried now. (I’ll try now to get a baseline starting point.) But I want to be able to draw a cat without looking at pictures of cats to copy. I’m not sure I can do this, but I’m going to give it a try. By the end of they year, at minimum, I want to have one stock cat I can draw. At maximum, I’d like to be able to draw an assortment of cats in different poses.

I think that’s it for this year. That’s enough, right? I will still try to be healthier. I’ll keep trying to get to the garden for more walking. I’ll try to be more focused on my personal writing to get a few big projects really going. I want to really tidy my house and loft. I want to get better on guitar and piano. I’ll try once more to get my roses to mate. (You read that right.) I want to make more YouTube videos and still want to get my channel re-monetized. But I don’t want to put undo pressure on myself to accomplish those goals. Those are the standing goals. They don’t depend on the calendar page turning from December 31 to January 1.

My terrible unaided attempt at a cat: 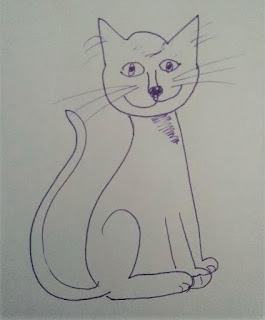 Hard to believe I'm looking at several live cats while this happened.

P.S. (added Jan. 2): I would also like to learn how to rip an apple in half, ala Bob Mortimer.

Posted by Camille Sharon at 11:39 AM No comments: