May Book Report - Sabriel by Garth Nix (with spoilers)

My birthday was in April and I was gifted some credit on Amazon. I didn’t have any idea what book to read in May. The only thing that I knew was, that despite reading a relatively short book in April, this has been a slog for me. I am not enjoying reading at all. One friend thought it had to do with book choice and tried to make suggestions of books I might like. She was annoyed by my request that the books all be under 300 pages or so, just so they weren’t daunting. The copy of The Moon Is a Harsh Mistress that I read was only 288 pages, but that was a trick. The current reprint edition is 398 pages long, and that 288 sure felt much longer. Tiny type will do that. I was miserable reading it. For many reasons.

The friend who gave me the credits suggested Sabriel, based on what movies and stories he knows I enjoy. It was over my page limit, by a lot, at 491 pages, but he was basically giving it to me for my birthday because of the credit, and he thought I’d like it, so I gave it a try.

I purchased the book very early in the month. It arrived much faster than the books I’ve been buying from independent sellers (and England) so far, so I had it available for almost the entire month. And there it sat.

I’d like to say that I was too busy with work to get to reading, but I went almost three weeks without work in May. I freelance, so I never know how things will be with work. For June, I’m booked and will probably also be working weekends to get everything done on time and with enough attention devoted to it. But May was wide open. Day after day, I’d look at the book, see how thick it was, and put on YouTube, listen to a podcast or go for a walk in the garden.

But there were only nine chapters available this way. I got out the book, flipped to the start chapter ten and put in the bookmark…

Then I got an email from Audible that they wanted to give me two free audiobooks. Ding! Winner! And so I listened to Sabriel, starting at chapter ten, read by Tim Curry.

Sabriel is a young woman, 16 or 17, who grew up in a very earth-like place called Ancelstierre which is separated by a wall from the Old Kingdom, where magic exists. Her father remained in the Old Kingdom because his bloodline as something called an Abhorsen meant he was needed to stop, or help stop, the constant stream of dead people and things which would claw their way back to life. He was a necromancer and was able to send the dead things back into death, by traveling there himself and taking them. He could also travel into death and bring back the spirits of things which were newly dead and make them not dead if their bodies were in good condition.

Death in the Old Kingdom is a place with a series of areas with water connecting them. They are divided by gates and it is only when a dead thing passes the ninth and final gate that it can’t come back to life. An ancient evil being, Kerrigor, is trying to amass an army of dead things to destroy the controlled magic in the Old Kingdom, called Charter magic, and replace it with free magic. I guess because the free magic is more powerful? I missed some of that.

Anyway, Abhorsen goes missing, not making one of his regularly scheduled meetings with Sabriel and instead sending a dead messenger to her with the tools of the necromancer - a sword and a set of magical bells. Sabriel decides to journey to the Old Kingdom to find him. It becomes her job to fight Kerrigor and restore order to the Old Kingdom, becoming the new Abhorsen.

The story was enjoyable enough. There is a cat, called Mogget, who isn’t all he appears. He works as a servant to the Abhorson and joins Sabriel on the quest to find her father and destroy Kerrigor. She also rescues the future king, who has been turned to wood for 200, and he joins her on the quest.

Things which really stuck out to me from the listening were that the words “Charter magic” and “Charter stones” are said a lot.  A lot-a lot. I also didn’t love the way Tim Curry did the character voices. Mogget was smarmy and everyone else sounded annoyed and snitty most of the time. But I enjoyed his reading of the bulk of the book, and that he read it so I didn’t have to.

My main complaint at the end when (SPOILER!!!) Kerrigor is turned into a cat like Mogget is that the reader doesn’t find out what happens to cat Kerrigor. I read a little bit about the next books in the series and it seems like Kerrigor is not mentioned again. Oh, well. The thing which really got me through the story was Mogget being a cat. There were some nice visual elements in the story, like the Paperwing, a paper plane which kind of magically becomes life-like and bird-like when a mage whistles and controls it. The moments of peril didn’t last very long, which I also like because I don’t want to have to stress about what fictional characters are doing.

By listening to the story instead of reading it, there were things which I felt were glossed over a little quickly - like what exactly Mogget is. If I had read it, I probably would have reread the few sentences where he is explained so that I was sure I understood it. I didn’t bother to go relisten to anything, aside from one time when I was getting a lot of text messages which were really disruptive to my concentration. When I read something, I’ll often reread passages just to make sure I’ve really understood everything.

Sabriel would make a good movie, probably animated, or mini-series. I’d be curious to see and hear the bells. I enjoyed it, but not enough to continue with the series. 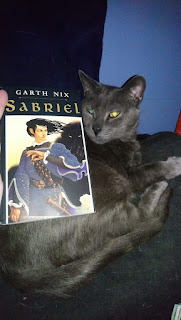 Posted by Camille Sharon at 7:14 PM No comments: