Prime Time Shuttle picked me up about 10 minutes late, but I still made it to the airport with plenty of time. The check-in system at LAX does leave a little to be desired. You have to go to a machine and print a ticket, then get in line to check your bags - a line they only let you in if you have a ticket from the machine. Tickets printed at home, I found out from the disgruntled couple in line, mean nothing. So, I printed my ticket and got in line. The line moved pretty quickly and to my surprise, when I checked my bags they tore up the ticket I printed at the machine and printed a new ticket for me. What an amazingly efficient system. And good for the environment, too, with all the torn up and discarded tickets.

The security check was the same as on a domestic flight. The only delay was when a whole group of flight attendants from a Saudi airline showed up and had first priority going through the security screening. After that, just find your gate and wait to board. My phone didn't work at LAX, but they have free wi-fi, so I sent a few emails. The terminal area is like a giant shopping mall, and the only bad part about that was having to walk forever past the shops to actually get to the gate. I had time to get a pizza and iced tea before my flight, so I did. 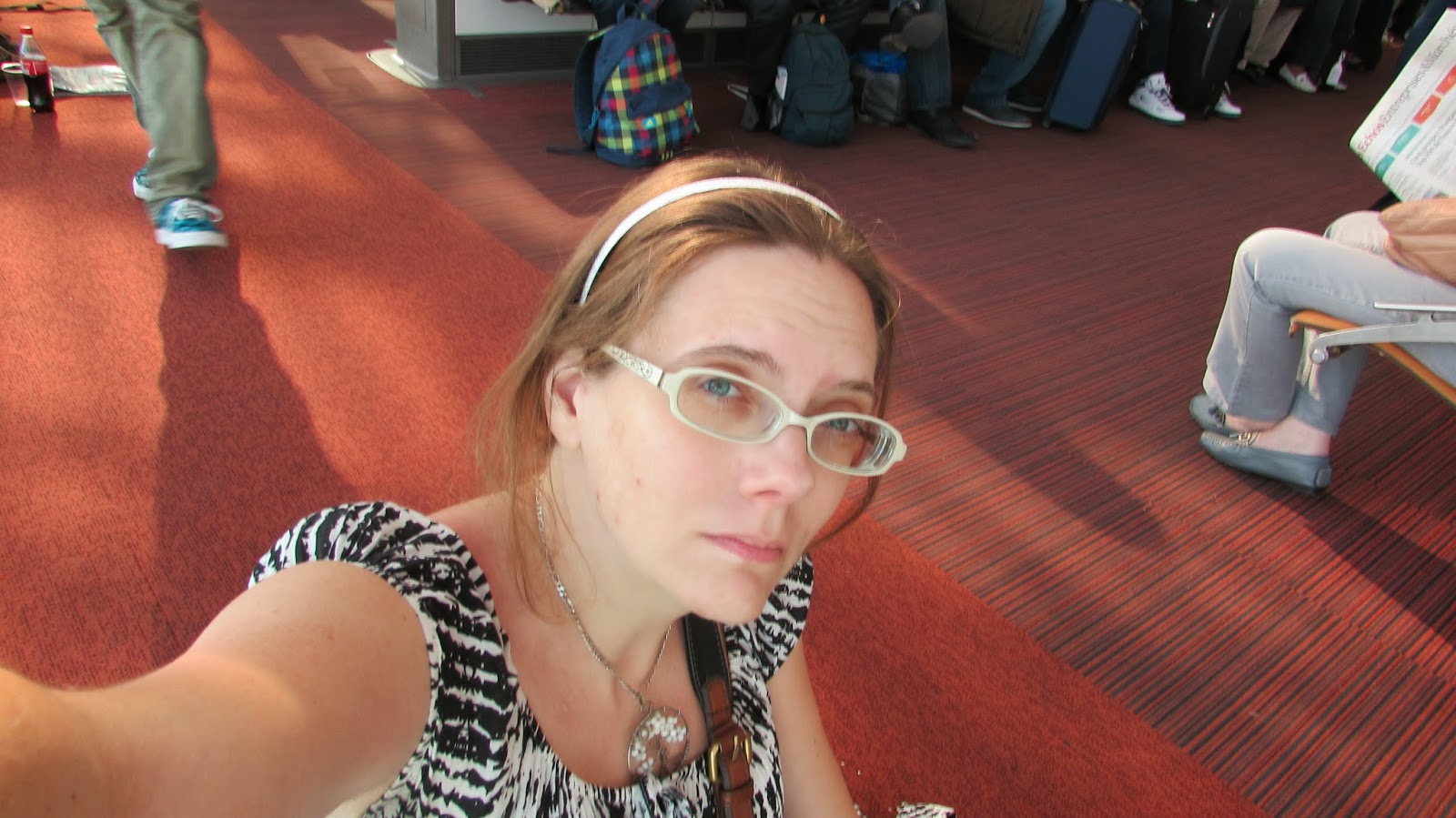 Me waiting at LAX.

The plane was more cramped than I ever remember a plane being. For some reason, I thought when I was little if someone in the window seat wanted to leave the row, they others didn't actually have to get up, but did to be polite. Now my small carryon bag didn't even really fit beneath the seat in front of me. I put my skirt out to cover it so the flight attendant wouldn't make me move it, although I didn't end up needing anything from it anyway.

The back of the seat in front of you has a screen which offers tons of TV shows and movies, enough to entertain me for the whole 11 hour flight to Paris. I watched 5 movies - Edge of Tomorrow, The Lego Movie, How to Train Your Dragon 2, Sex Tape and The Grand Budapest Hotel, and the one episode of Veep that was available.

The most alarming thing the screens have available is a view from three cameras mounted outside the plane - one looking straight down and the other two to front and back. Every seat can be a window seat! I just thought about how much my sister would have hated to be able to see outside the whole plane for the whole journey, although most of the time it was clouds, so nothing to see. 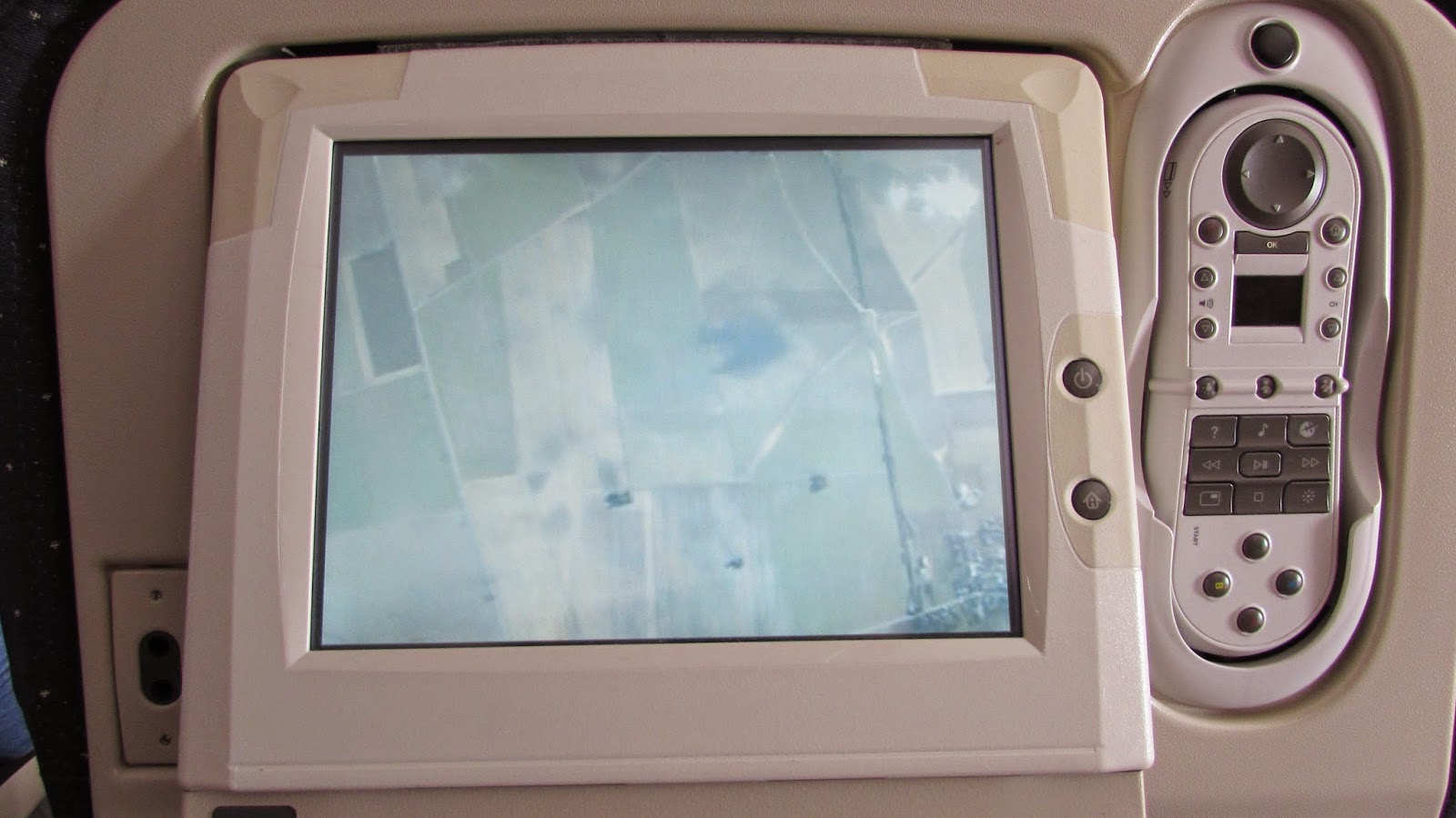 The earth, as seen from the back of an airline seat.

I pre-ordered a vegetarian meal and for the most part I'm glad I did. I got my meal first, before the food cart came down the aisle. And even though there was a choice of cheese ravioli for the lunch meal, they ran out just before my row and only had chicken left. Also, instead of a pastry, the vegetarian meal had fresh fruit. The vegetarian breakfast, however, was not good at all. Sure, there was a muffin and apple sauce. Bread and butter. Orange juice. But along with that there was a tray of boiled veggies - mushrooms, carrots, asparagus. Just what you want first thing in the morning.

My layover in Paris was very short - just shy of an hour. It was in Paris where we went through customs and got our passports stamped. Then a change of terminal. My flight gate was at F51, but all of the signs directed you to terminal F2. You just had to have faith that since they both said F, it was the right thing to do. Luckily, my connecting flight was delayed by 40 minutes or I would not have made it to Barcelona. And, unfortunately, my luggage did not make the connection.

The gate in Barcelona had two ramps for two different planes at the same gate, boarding at almost the same time, causing great crowds and mass confusion. I looked at the other gates and it seemed to be standard operating procedure to have two planes at each gate. I think they might need a bigger airport...
Posted by Camille Sharon at 8:48 PM