I had to get up early for a tour to Cadaques and the Dali museum in Figueres. I walked the 7-8 blocks to the tour office, stopping to get a Coke on the way, which was served with a straw, and made it in time for my 8 AM tour. Unfortunately, my bus for my 8 AM tour made it at 10 AM. The tour company knew they were running a little late and sent everyone around the corner to a coffee shop. I got a really good cup of tea with ice (2 cubes) on the side. I learned from the barista, who didn't speak English, that I would get what I wanted in Spain if I ordered what sounded like Tea Yellow.

After the tea it was back around the corner to stand on the street waiting for the bus to arrive. The tour company was next to a spectacular building called the Palau de la Musica. They have musical events there, and if I had been in Barcelona longer I would have tried to see one. 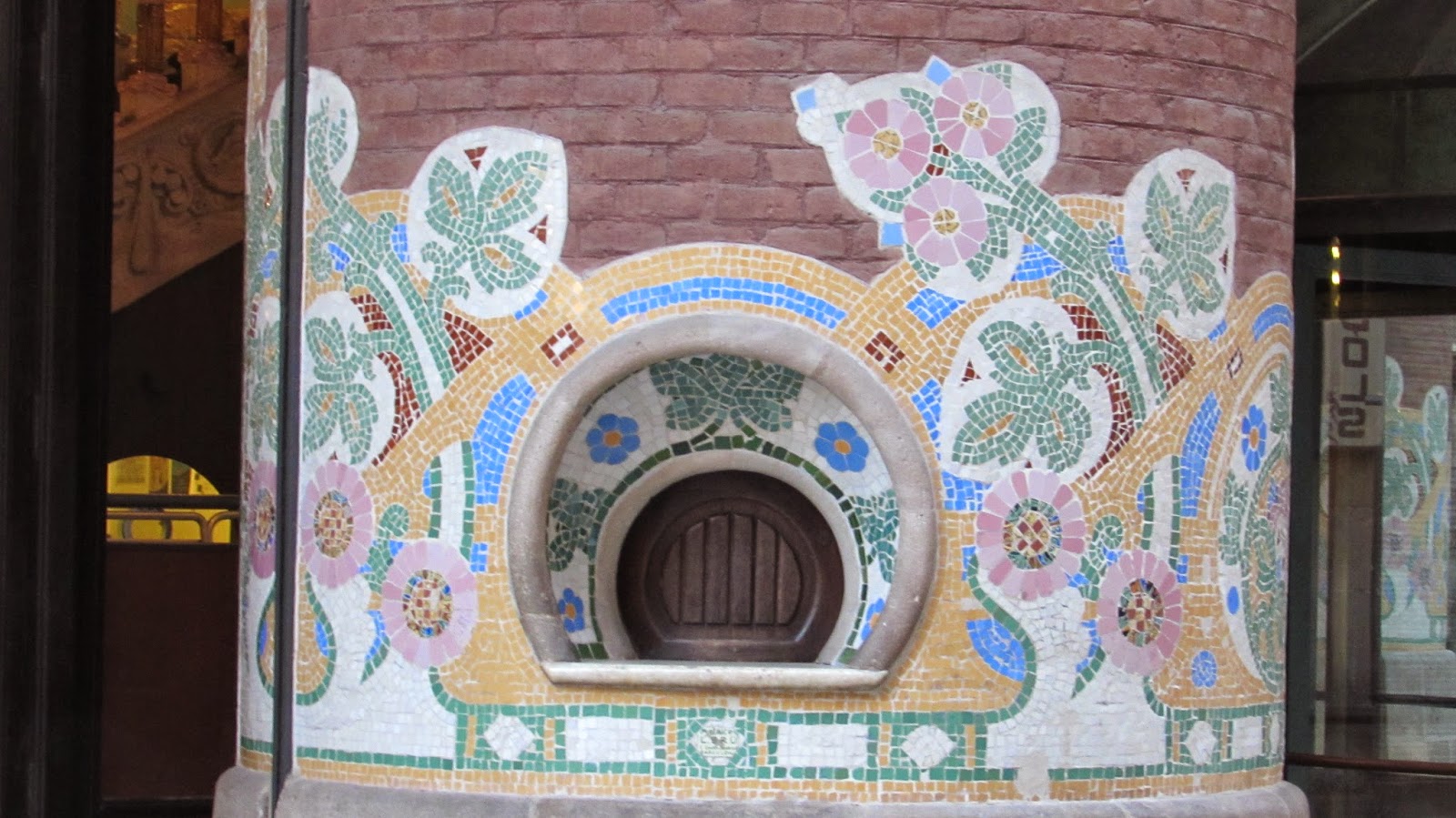 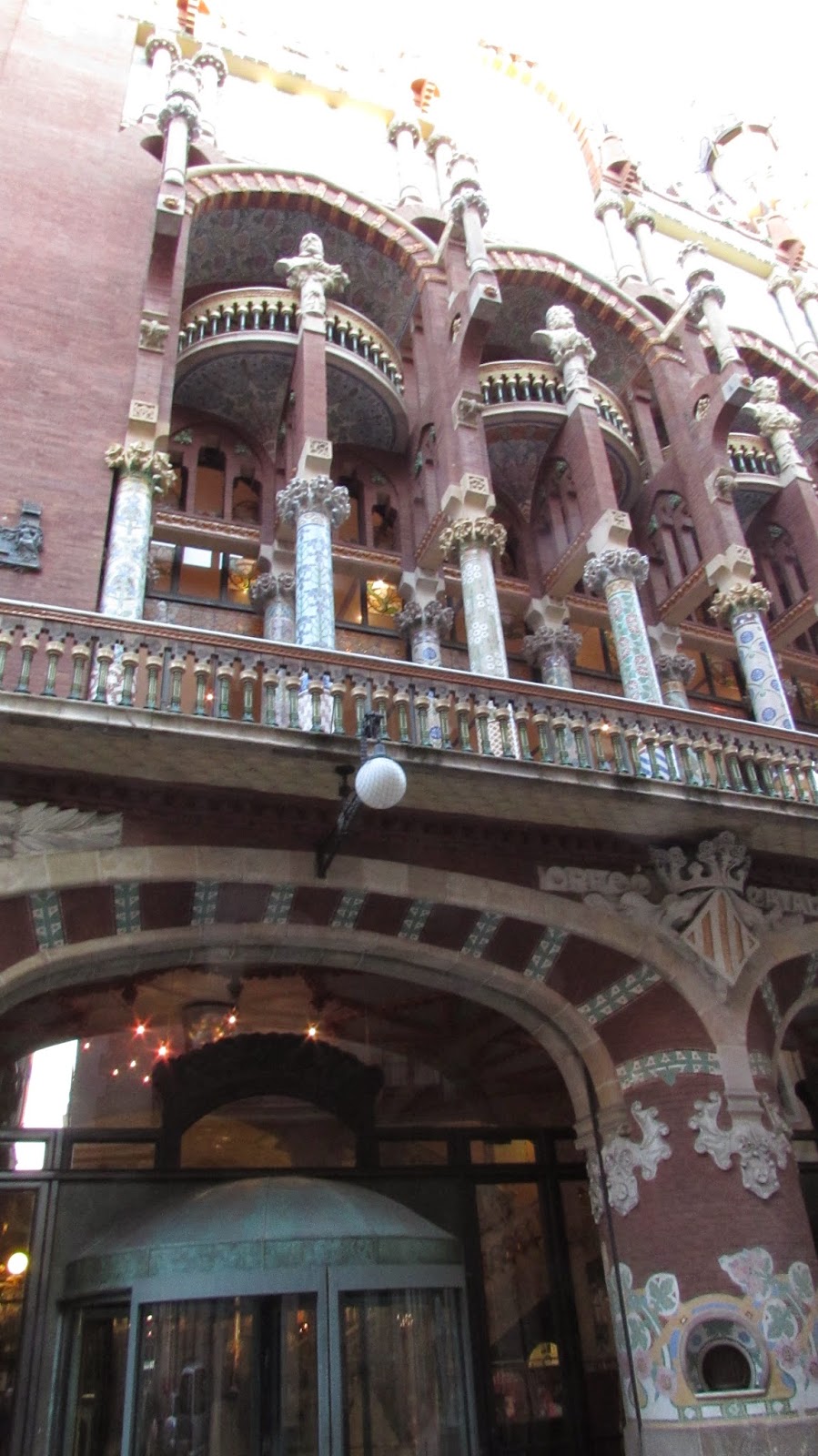 Our tour guide, Fabian, was Basque. This company is owned by an Englishman and all of the tours are in English. We went to Figueres and to the Dali museum as our first stop. 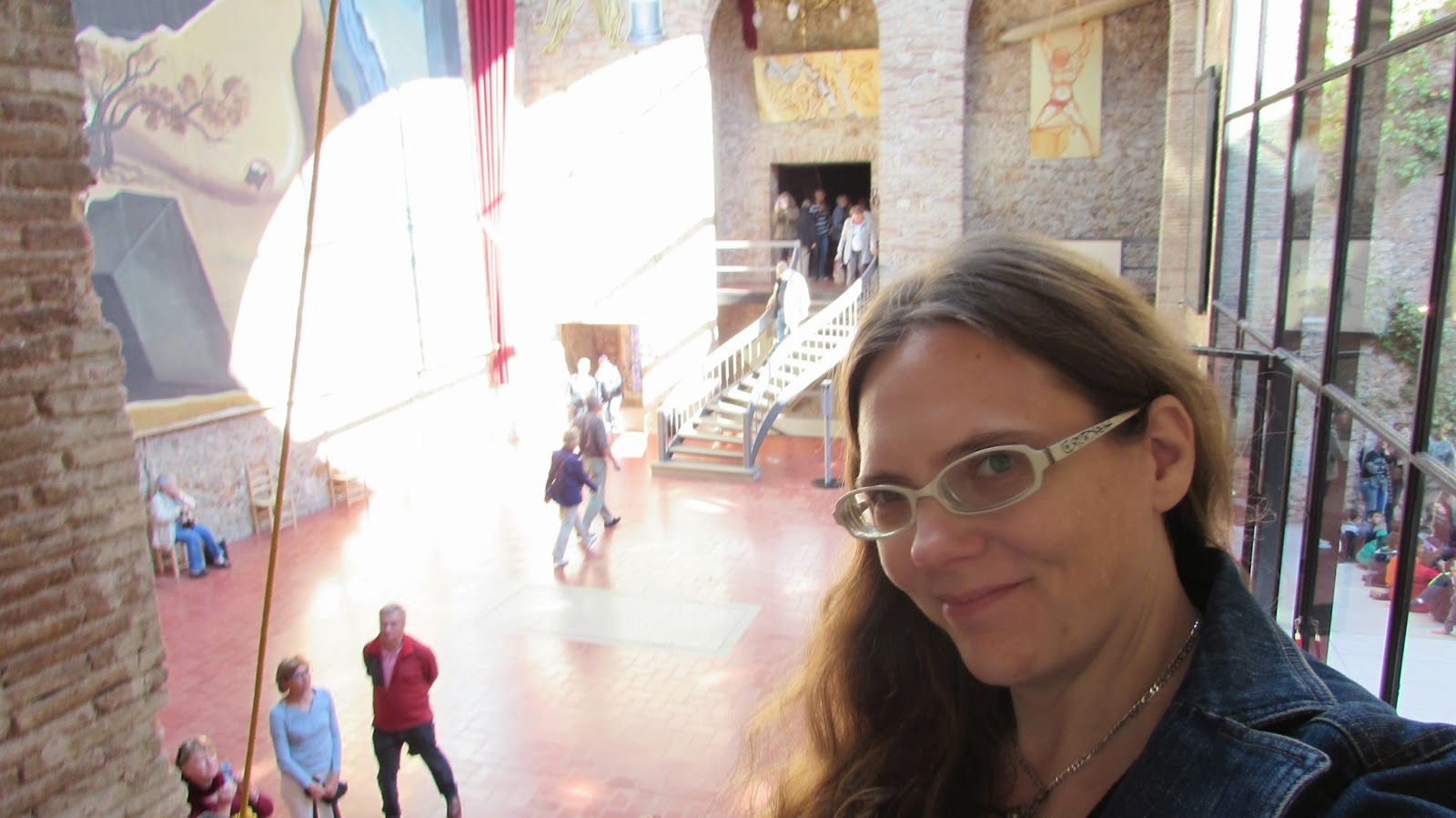 Me, inside the Dali Museum.

Maybe it's wrong of me to say this, but the more museums I go to, the more I think that the great artists didn't only make masterpieces. Like, when I paint something, there is a better than 50% chance it will really be garbage, but I don't throw it away. What if in 100 years someone decides I was a great artist and they put all of these garbage paintings in a museum... There you have a lot of the Dali museum. None of his really famous works are even there. But Dali built the museum himself, so part of the visit is seeing what he thinks the layout of a museum should be. 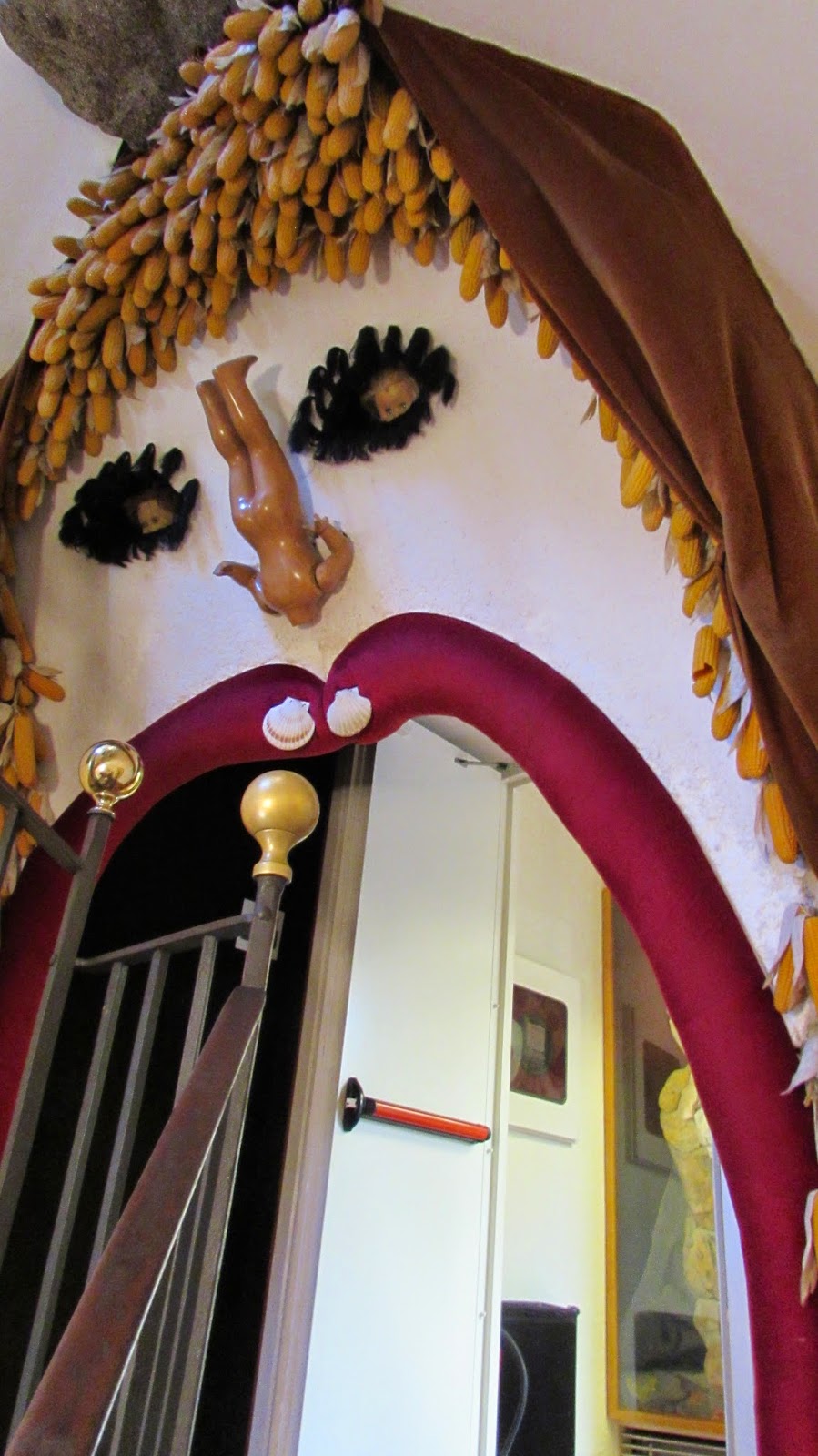 A doorway in the museum.

Next to the main museum, there is a smaller museum with some of the jewelry Dali created. I thought this was a much more interesting place - although I think I would only wear something from there to tell everyone it was by Dali. Our ideas of beauty do not overlap. 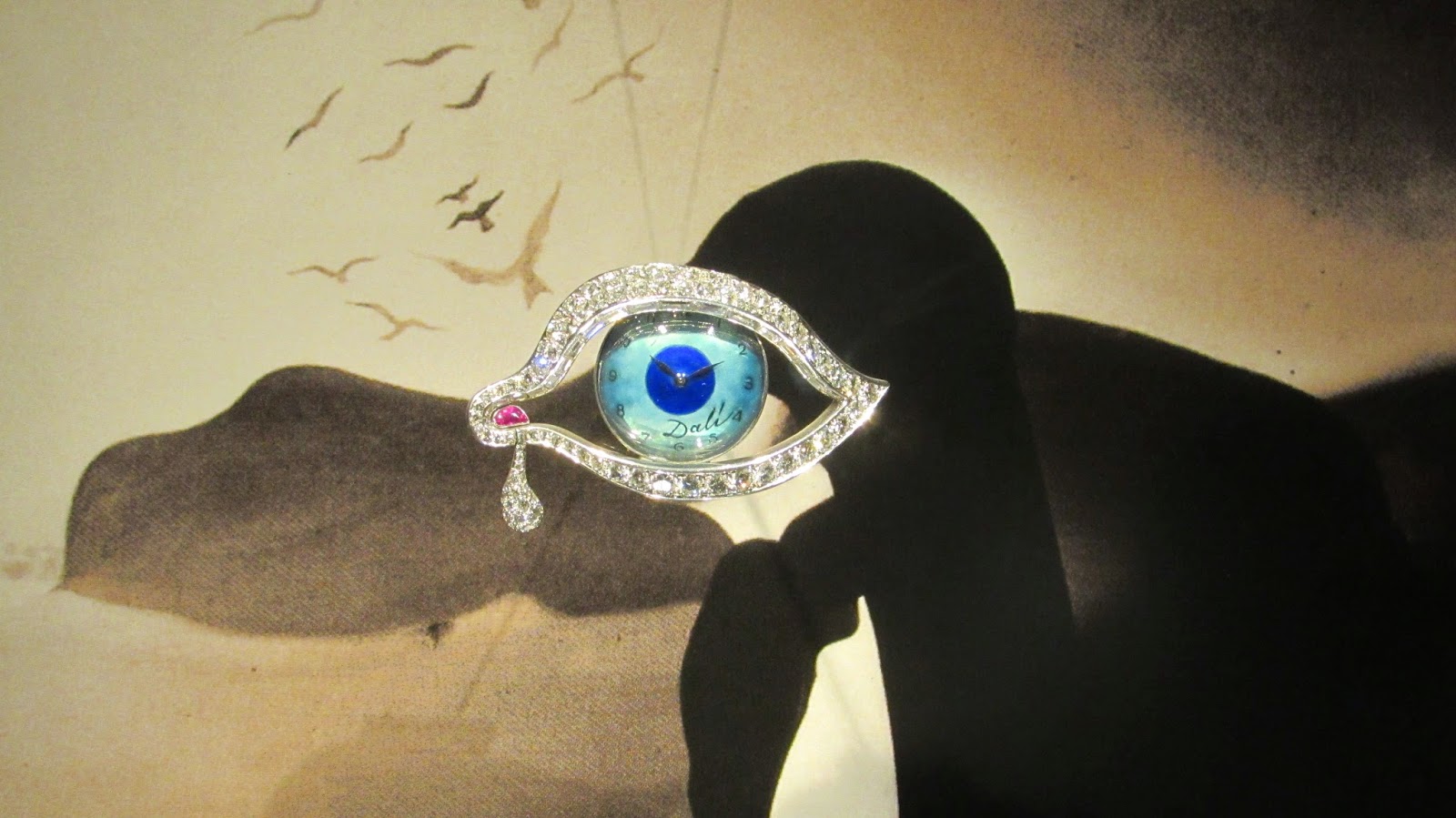 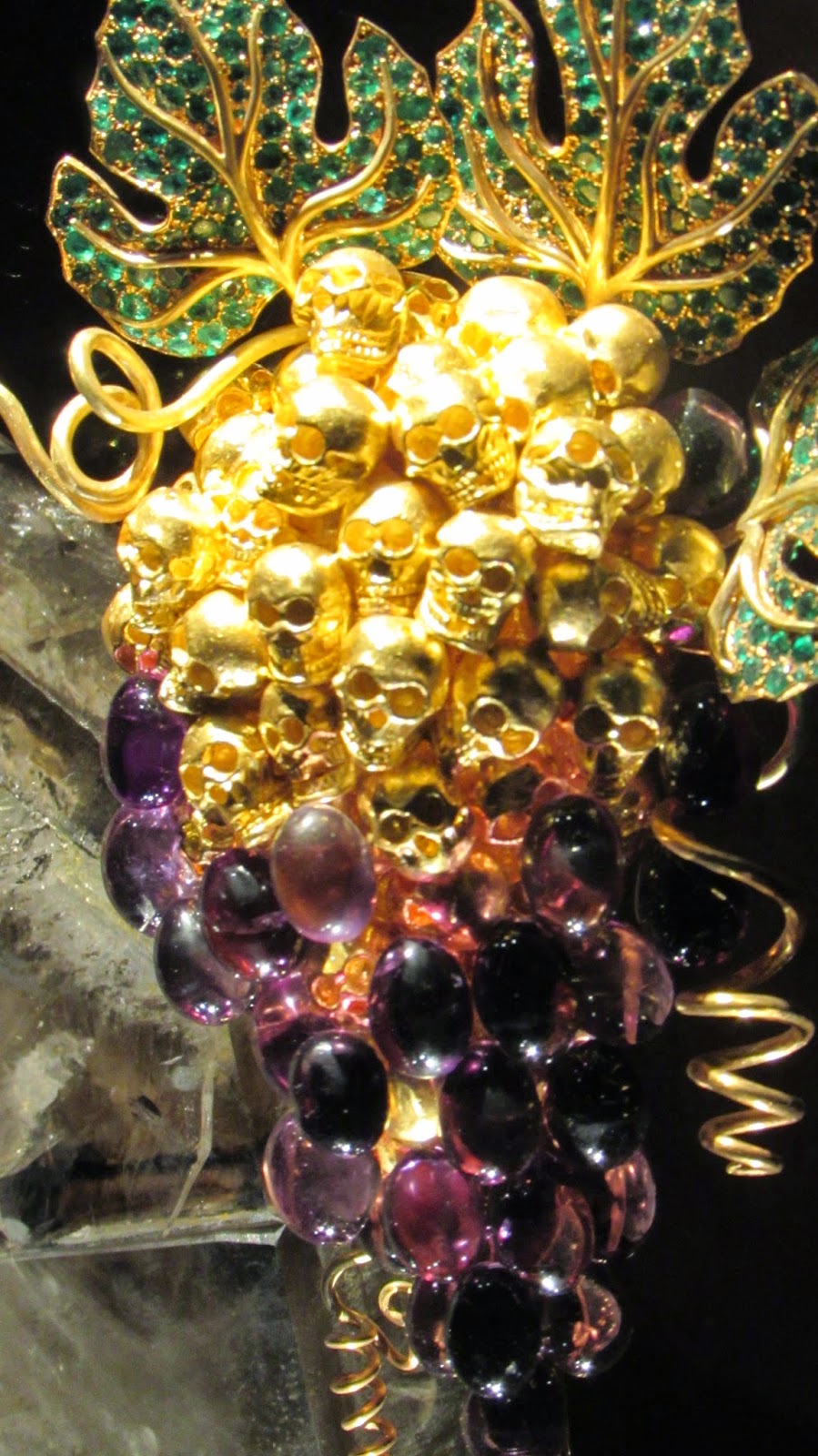 After the museum, we went to Cadaques, where Dali lived most of the time. I had a terrible migraine and tried to buy some medicine, but the pharmacy was closed until 4 PM and we were leaving for our next stop at 3 PM. I had a smoothie and bought a skirt to wear the next day (with the shirt I was sleeping in), and sat down on the pebbly beach, watching the water. Interesting to me, some of the pebbles on the beach were actually worn-down brick, which is not something I remember seeing in the US. 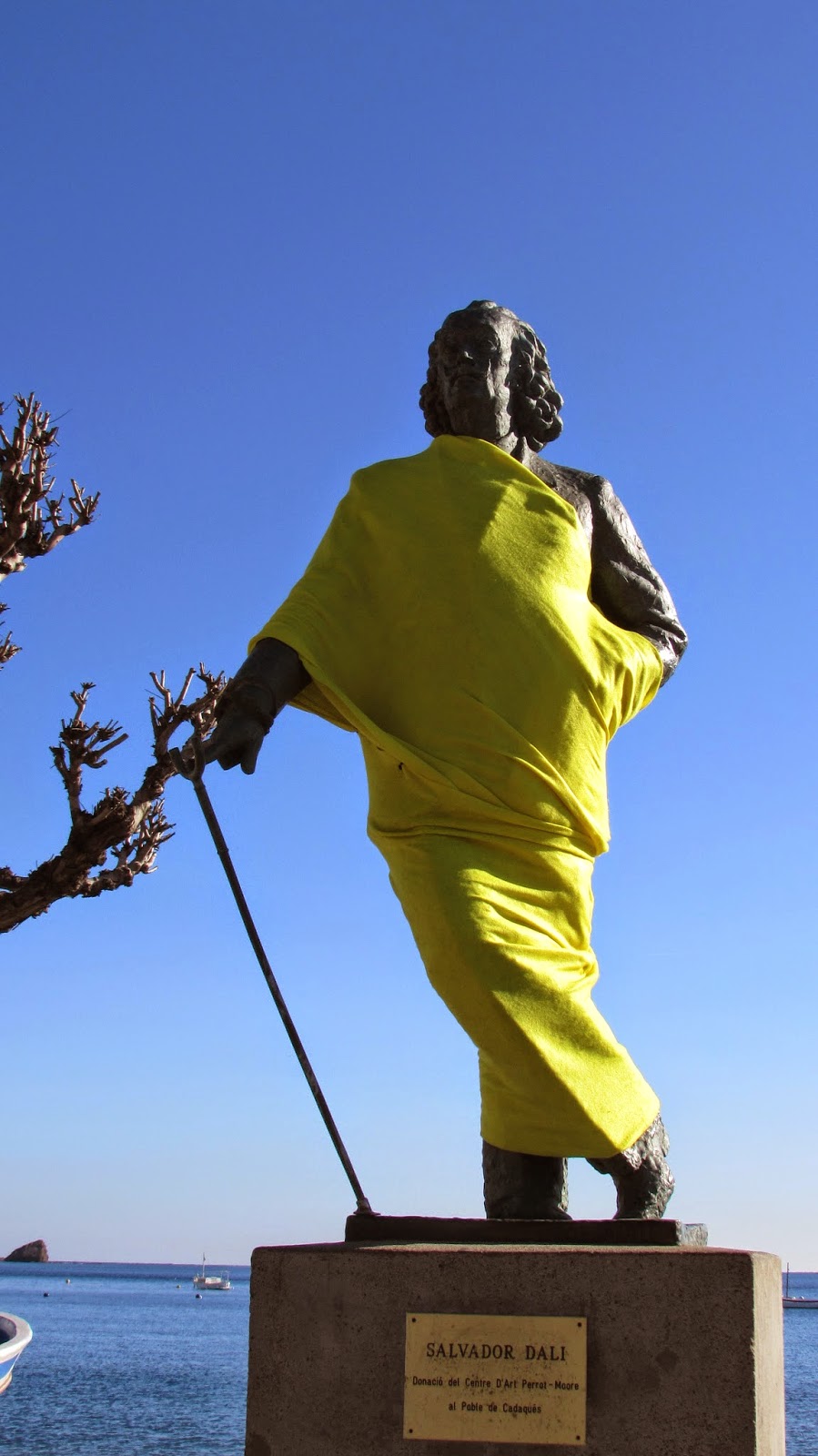 Dali, dressed for the upcoming vote.

We got back in the bus and drove up the coast a little bit to Dali's house. It was 11€ to go on a tour inside of the house, where there was no artwork. It was literally just his house. I passed and spent the time on the beach. 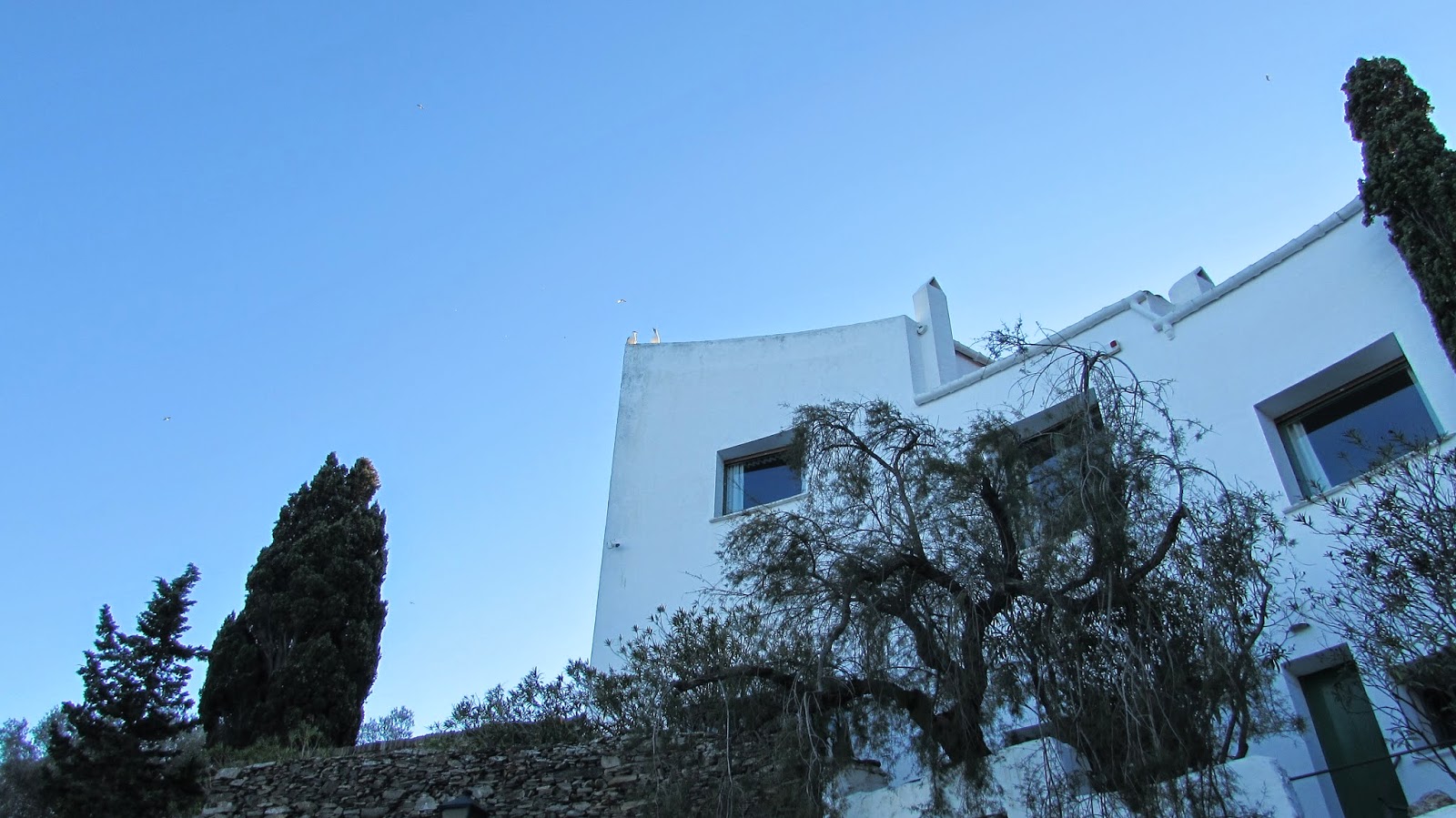 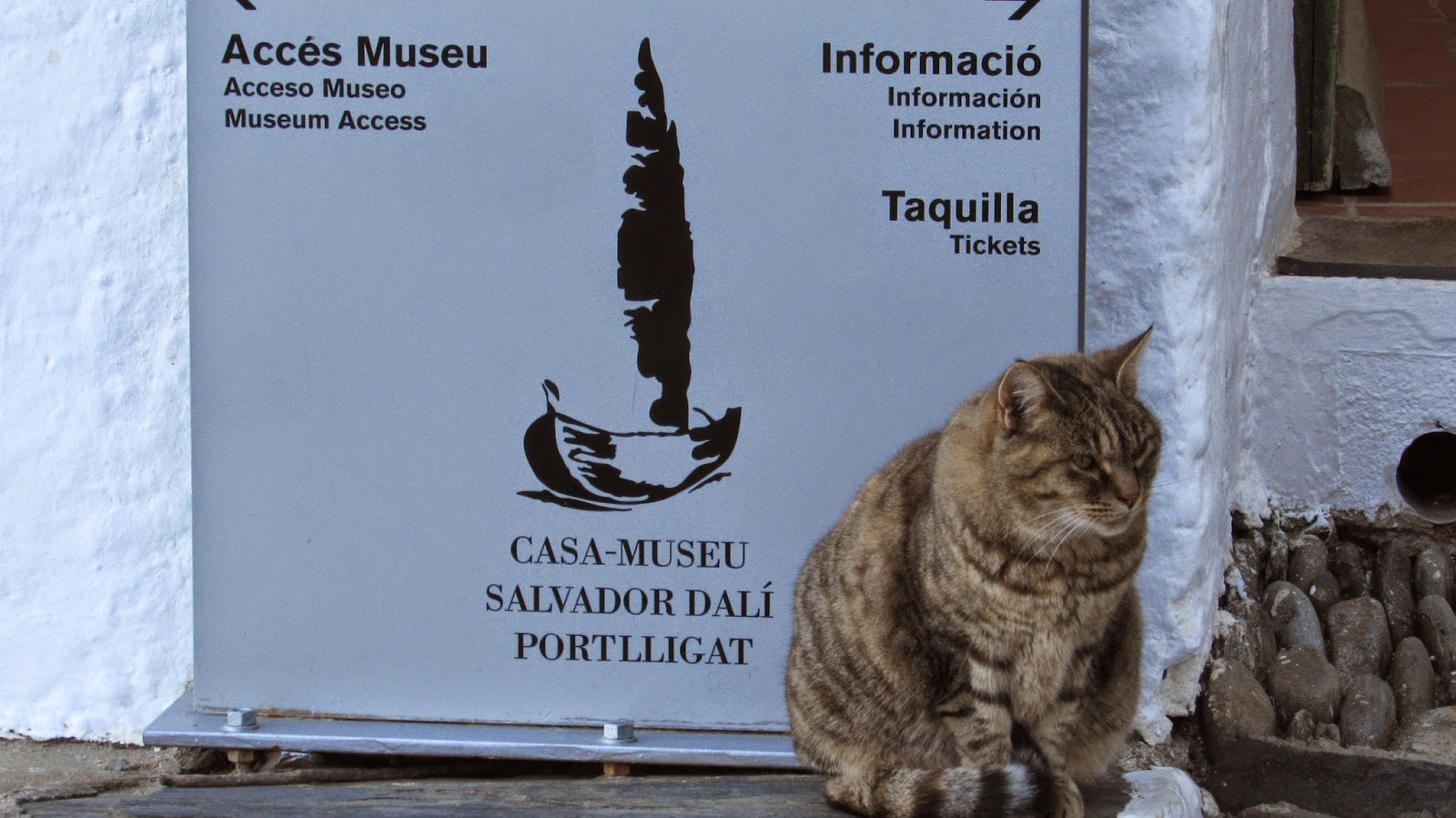 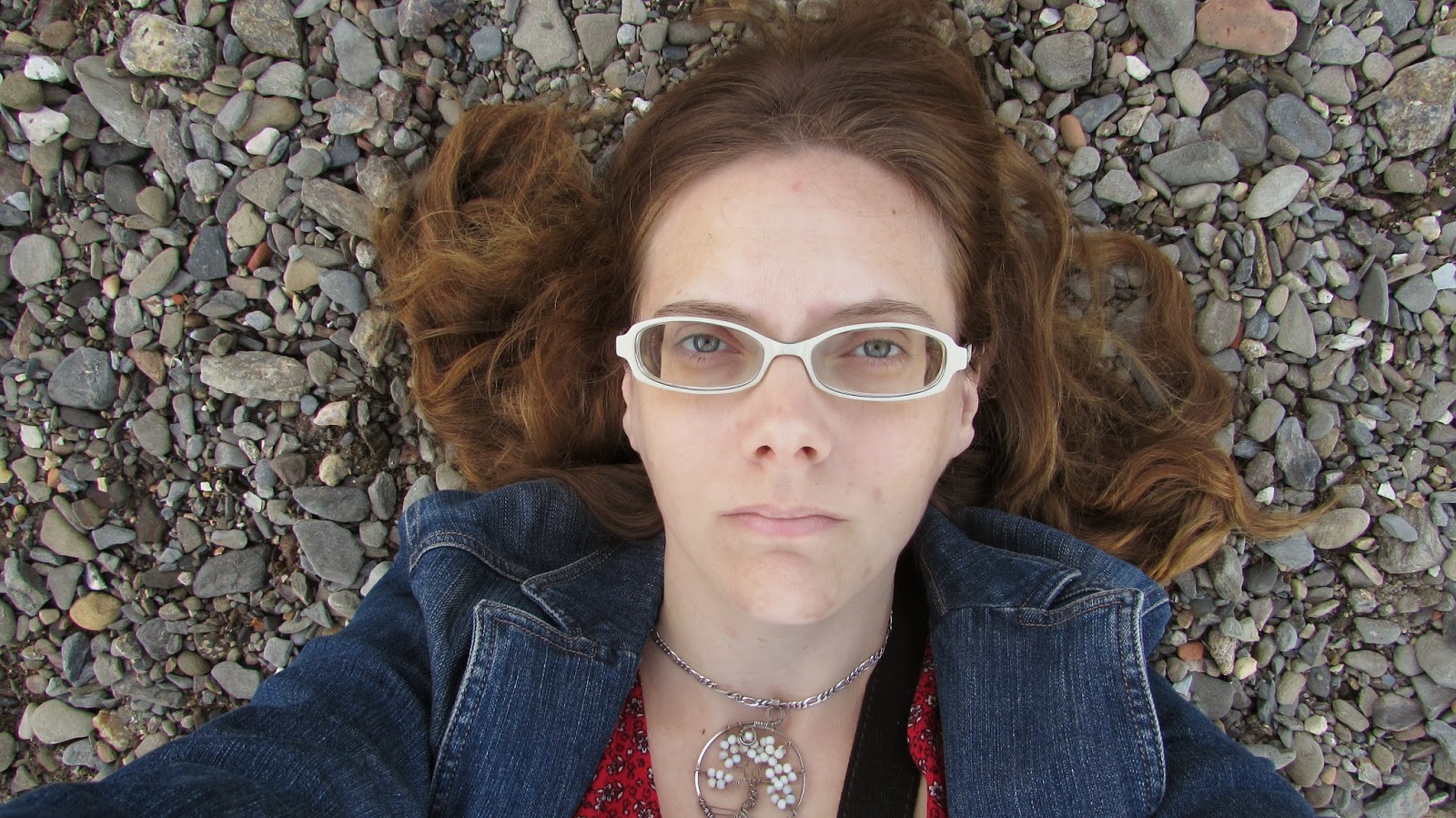 Me, on the beach, not feeling good.

When it came time to leave, we had a 3 hour drive back to Barcelona, but unless you took the tour of the house, you could not use the toilet. I walked up to the top of a steep hill past some restaurants, but they were all closed. There was a hotel at the top of the hill but they refused to let me use a restroom. Finally Fabian talked to the guard at the Dali toilets and they reluctantly let me use them.

Then there's nothing like a 3 hour bus ride with a migraine. I knew I had packed pills in my purse, but couldn't find them. This was going to be my last one, too, since the flight had already cause me to use up the other two I had in my purse. Six more were in the missing suitcase...

And then there's nothing like having to walk 7-8 blocks in the dark with a migraine after a day of walking. I was so happy to be back at the hotel. Room service, please! Cheese croquettes with fries and a small salad. They were not delicious, but I was relieved to not have to venture out to find food, and I did find my migraine pill in the bottom of my purse.
Posted by Camille Sharon at 9:08 PM