Back Story by David Mitchell (not that one) - June Book Report

I say “not that one” because most of the time when I would tell people what my June book was, they would say something like, “Oh, he’s a great writer.” Or “Cloud Atlas is great.” Or “That’s some pretty heavy reading for you, Camille.” No. Not that David Mitchell. The other one. The one who you might know from YouTube “David Mitchell Rants” compilation videos. Or, if you are like me, you’ll know from Peep Show, Would I Lie to You? and Upstart Crow. That David Mitchell. The funny one.

Once again, I did not read my June book. I listened to it. Read by David Mitchell himself.

I am a big fan of David Mitchell Rants videos. And of David Mitchell’s Soapbox. And of Would I Lie to You? I’ve seen all of Peep Show and Upstart Crow, but I’d hesitate to call myself a fan of those. I’ve seen the shows once, and that might keep me for the rest of my life. Not that I’d intentionally avoid seeing them again, I just don’t feel the need. But if new episodes do appear, I’ll watch them. How’s that? I can listen to David Mitchell ranting for hours, over and over again.

I bought Back Story (audiobook) several years ago when Audible convinced me that my life would be better with a subscription. One book credit a month for a low-low price of maybe $7.99 at the time? Fine. I have been known to spend over $4 on one glass of tea and to lose considerably more money on one impulsive trip to a casino. Potentially supporting some authors for such a low price seemed like a good idea. And then I never listened to any of the books. I found myself after several months with credits I hadn’t used. Audio files unpurchased. Those I had purchased were never started or even downloaded. I had listened to half of Colin Mochrie’s Not Quite the Classics (ready by the author) and got annoyed that my Amazon Dot thingy had such poor sound quality. I couldn’t hear the book and say, walk on the treadmill, or clean, or do dishes, or any of the other active things I wanted to do while listening to a book. That was why I was listening and not reading, so I could multitask. And Alexa just wasn’t doing her part.

Last month, Audible convinced me that even though the price they were now offering of $14.99/month wasn’t great, the two credits on offer for giving it some good considerations were. I downloaded Sabriel, for my May book which I hadn’t been able to bring myself to start actually reading, and then downloaded a copy of a friend’s book (The Resurrectionist by A.R. Meyering). I was reminded that I had a hidden little library of things just waiting for me. The technology for playing the audiobook was a little bit better suited to my lifestyle now. I could listen through my phone, which also meant I could listen in the car. I don’t drive a lot, but at least once a week I go on a 60-mile roundtrip and it was nice to have something beside the radio to listen to.

Back Story is sort of a mid-life autobiography. Usually, when I think of an autobiography, it is something that someone writes when they are nearing the end of things, looking back on a full life. Well, David Mitchell is perfectly happy to give you an update on how his life was by the year 2012, when he was just turning 38. FYI, we were born in the same year, but it is still a little frustrating to hear how far he had gotten by the time he was 38, now that I’m listening to the story from the ripe old age of 47.

The story of David’s life is hung on a framework of going for a daily walk through London. He talks about where he is now on the walk and then goes off on stories inspired by the things he sees and passes. “Oh, this pub reminds me of the time I got drunk in a pub at Cambridge,” etc. He manages to make a one hour walk around London into nearly 9.5 hours of reminiscing. This is not a complaint. The stories were interesting and there is no better way to hear them that having David Mitchell tell you himself. His writing is conversational, like he’s really there telling you these things. Although I fully know that the words were written and edited and critiqued before getting to me, they seem so natural that the experience of listening to the book feels almost like listening to a podcast or watching a series of extemporaneous rants on YouTube. In other words, a delight.

There are some people who are just naturally gifted at ranting, and David Mitchell is one of them. I’d like to throw a shoutout to a friend and former co-worker Shannon for also having this skill. Not that the book is all ranting. It’s stories. It’s life. It’s how success happens to one man who knew from a very young age what he wanted to do and to be.

If you are a fan of Olivia Coleman, keep an ear open for the time David Mitchell made her pee herself on stage. If you are a romantic, prepare to be swept away with David’s retelling of falling in love with his wife, Victoria (who is also well known in the UK and appears on many panel shows). If you want to know why David Mitchell doesn’t ever read anything by David Mitchell, the answers are provided.

I’m not familiar enough with London to fully visualized David’s walk, but I know a little bit. I feel like I’ve gotten to know David Mitchell a little bit after this book. And I think we would get along pretty well. He’s not as much of an upper-class snob as his TV personal plays up.

I enjoyed the experience of having this particular author read his own book to me and I’m considering downloading more of his books. Maybe I’ll download books by some other writer/comedians who I enjoy, like Richard Ayoade, so they can read to me, too. Just considering at this point, but who knows what tomorrow holds. 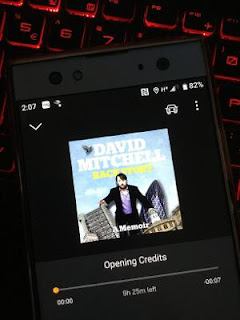