My Interview Stories - The Palms

After watching many interviews on late-night shows and day-time shows during the past year, I’ve become keenly aware of the old go-to stories that celebrities tell. Often, I don’t enjoy hearing the same one or two stories from people as they do the rounds on talk shows to sell their latest project. They usually have no variation. They have practiced the story dozens of times, pausing for laughs in the same places, even if no one laughs. (The one story I do enjoy each time I hear it is James Acaster’s Pin Drop band story. Look for that one if you get the chance.) But this got me thinking about what some of my talk-show stories might be. Here’s the first one.

After I had lived in LA for a few years, I started taking voice lessons. To what end? Who can say? We got the trades at work and I did see an ad in the one for variety acts for a local cabaret night, so I answered the ad.

I discussed the songs I knew with my voice teacher and we decided I should sing “Another Hundred People,” by Stephen Sondheim. The promoter who was trying to get the cabaret night together had hired a piano player, so I just needed to bring the sheet music to the audition.

I went to the audition, at the club, The Palms, in West Hollywood. I told a gay friend of mine that I was singing there and he asked me if I was sure, because it was a lesbian bar. Sure. No problem.

The audition was acapella and the promoter was sufficiently pleased that I got the job. It paid 2 free drinks at the bar the night of. I wasn’t doing this for the money, so that was fine with me. I left a photocopy of my music for the pianist.

I don’t remember much about before the show. I knew where the club was from the audition. I parked at a pay garage instead of driving around and around looking for a meter, so already I was losing money on this gig. There wasn’t so much a stage as one of end of the room with a keyboard and microphone. I sang and the piano player played…something. He certainly wasn’t playing the song I was doing. I probably starting singing faster and faster, just wanting to finish this weird duet of voice and noodling. It was excruciating for me. I don’t think the audience noticed, if they were even paying attention.

I finished the song and took the one step from stage to crowd. I made my way to the bar. I traded in one drink ticket for a coke. “You could have something stronger,” the bartender suggested. No, just a coke.

A woman, older than me by maybe 40 years, who can best be described as Popeye, sat beside me and started to chat me up. I was polite, but I don’t think I even finished my drink before leaving the club. Did I thank the promoter? I don’t know. Did I stay and watch the rest of the show? No. How rude of me. I left and was thankful that I didn’t have to walk far to the parking garage.

I don’t think I answered any other ads looking for singers after that. Not that it was a horrible experience, just that it wasn’t for me. I guess that’s why I’m not famous.

Posted by Camille Sharon at 7:07 PM No comments:

I Wrote a Book!

I have been writing a book for years. And I finally decided it is done.

If you have some money laying around, it would be the best Christmas present ever for me if you would buy a copy of my book.

Here's the cover, which is part painting by me (with soft pastel) and part electronic. I tried a version where I did the text by hand, but it was a mess and difficult to read. Having a title which people can't read didn't seem like a winning marketing strategy. 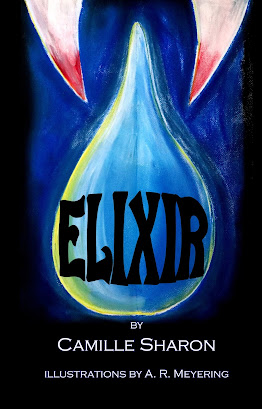 Here's the terrible version, which is 100% soft pastel: 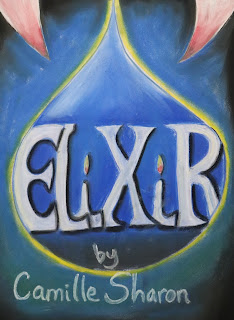 I think you'll agree I made the right call on that one.
Anyway, thank you for supporting me!

Posted by Camille Sharon at 2:30 PM No comments: