It is the future. People have spread out all across the universe and the Galactic Empire rules. No, this is not Star Wars. That’s set in the past.

In the future, a science has developed which is akin to fortune telling. One man, Hari Seldon, is an expert in this science and he has seen the end of the Empire. He sets in motion an elaborate, century-spanning plan to build a better ruling outcome for the universe, hopefully sparing centuries of war and unrest in the process. The start of his plan it to be exiled to the farthest end of the universe with a group of intellectuals, under the pretense of writing the perfect, all-encompassing encyclopedia of everything ever. And to not tell them the rest of the plan. Hari Seldon has recorded holograms of himself which play at pre-determined times, when he has predicted a great conflict or crisis will have just been overcome. They provide the only clue if his vision of the future is happening as he predicted or not. (It is.)

The whole book is like a game a chess. You know how in chess, before you make your move, you try to calculate all the other moves your opponent could make as a result? Yes. Boring and time consuming. And when done properly, not very surprising. (I’m not very good and chess and never really understood why it was fun. I have not watched the Queen’s Gambit yet.)

Let me get this out of they way. I counted two female characters in the whole book. A secretary who got one or two lines of mention, and a Commdora. The Commdora got two whole scenes, maybe totaling four pages, but she was just there to be snippy. The rest of the time, any new character who gets introduced - no matter how unfamiliar their name - don’t worry! It’s a man.

The story is told primarily through dialogue, which makes it not very interesting and difficult to follow at times. At the start of each chapter, a paragraph or two of set-up is presented and then the characters chat. And at the start of each section of the book (there are four), just go ahead and forget all the characters you were just getting to know. They are long dead and it is now dozens of years later. But don’t forget them completely. Their names might come up. But while you try to remember the names of characters who have disappeared and died, also learn the names of all the new characters in the new section of the novel. Names, names, names.

None of the characters are fully developed. The action, predicted, but kept secret, by Hari Seldon, is not exciting. Things just work out. Wars don’t happen. And if it looks like a war is about to happen, turn the page and it is fifty years later and the first sentence makes it clear the war was, in fact, avoided. The story is all lining up dominoes, but the reader never gets the satisfaction of seeing them knocked down.

It does have some interesting parallels to modern-day politics. Part of one successful war-avoiding tactic is to build a religion. They use missionaries to infiltrate surrounding worlds, or train priests on those worlds, and ultimately disable power supplies. It is hard to read how the religion is weaponized in Foundation and not see similarities to how Evangelical Christians and Republicans currently work together to push an agenda. It works until the missionaries and priests are no longer welcome on nearby worlds, because they have been revealed to be more loyal to their religion than anything else.

If putting plans in motion, politics, discussions and a universe where women are virtually nonexistent sounds good to you, then you might like Foundation. It didn’t work for me. 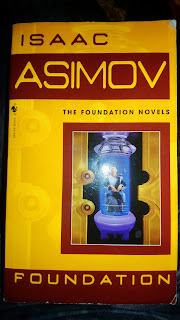 Posted by Camille Sharon at 8:06 PM