Making the Best of It in London

Since the internet was weird at my hotel, I couldn't do as thorough a job of researching where I had to get for my tour in the morning. I had ridden the underground enough the day before, though, to have a general idea of how long I needed to get to the tour office. I asked the man working the front desk in the morning if he knew where the tour office was and how best I should get there. I told him I was planning on taking the underground, but "no, the bus is much better. It stops right in front of the hotel!" he assured me. 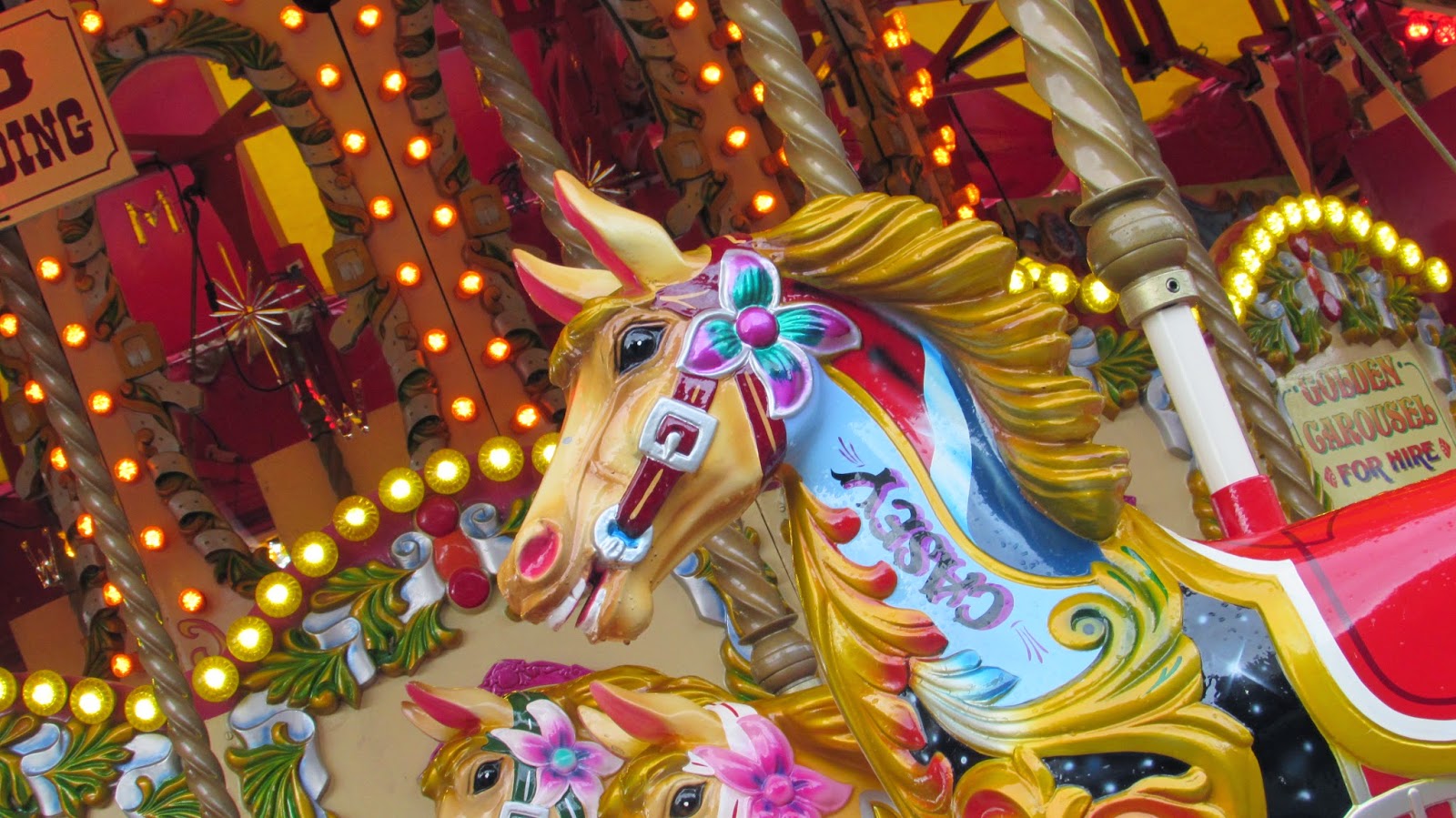 From a carousel near the river.

He told me to get on bus 148, show the driver where I was going on my map, and everything should be fine. I got on the bus and discovered that they only accept pre-paid tickets. The driver had already pulled away, so I was stuck on the bus at least to the next stop. The bus didn't go where the guy in the hotel thought, though. The driver, calling me "that lady," as in "that lady, where were you going again?" let me off a few blocks from where I needed to be with maybe two minutes to get to the tour. I kept hoping the tour bus was running late. 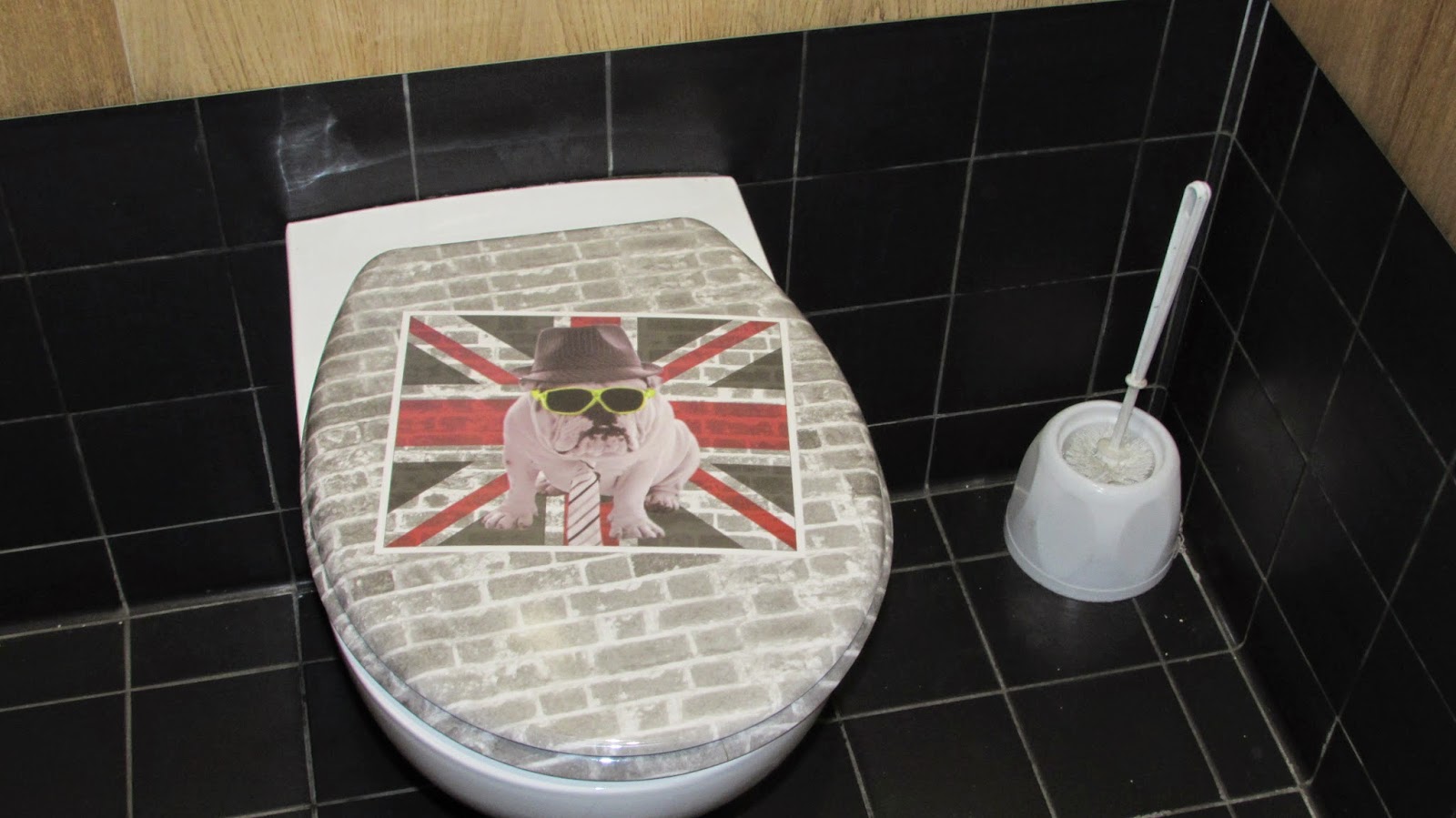 A public pay toilet near the London Eye.

I walked quickly in a light drizzle to the street I needed, but could not find the place marked on my map by the front desk man. I asked several people and it turns out, it is almost impossible to find someone in London who is from London and knows anything about the city. I even asked a man cleaning up trash bins, theoretically working for the city of London, who it turns out was from Africa. He told me to ask someone with a cigarette, which seems like very strange advice, indeed. I roamed around and around. 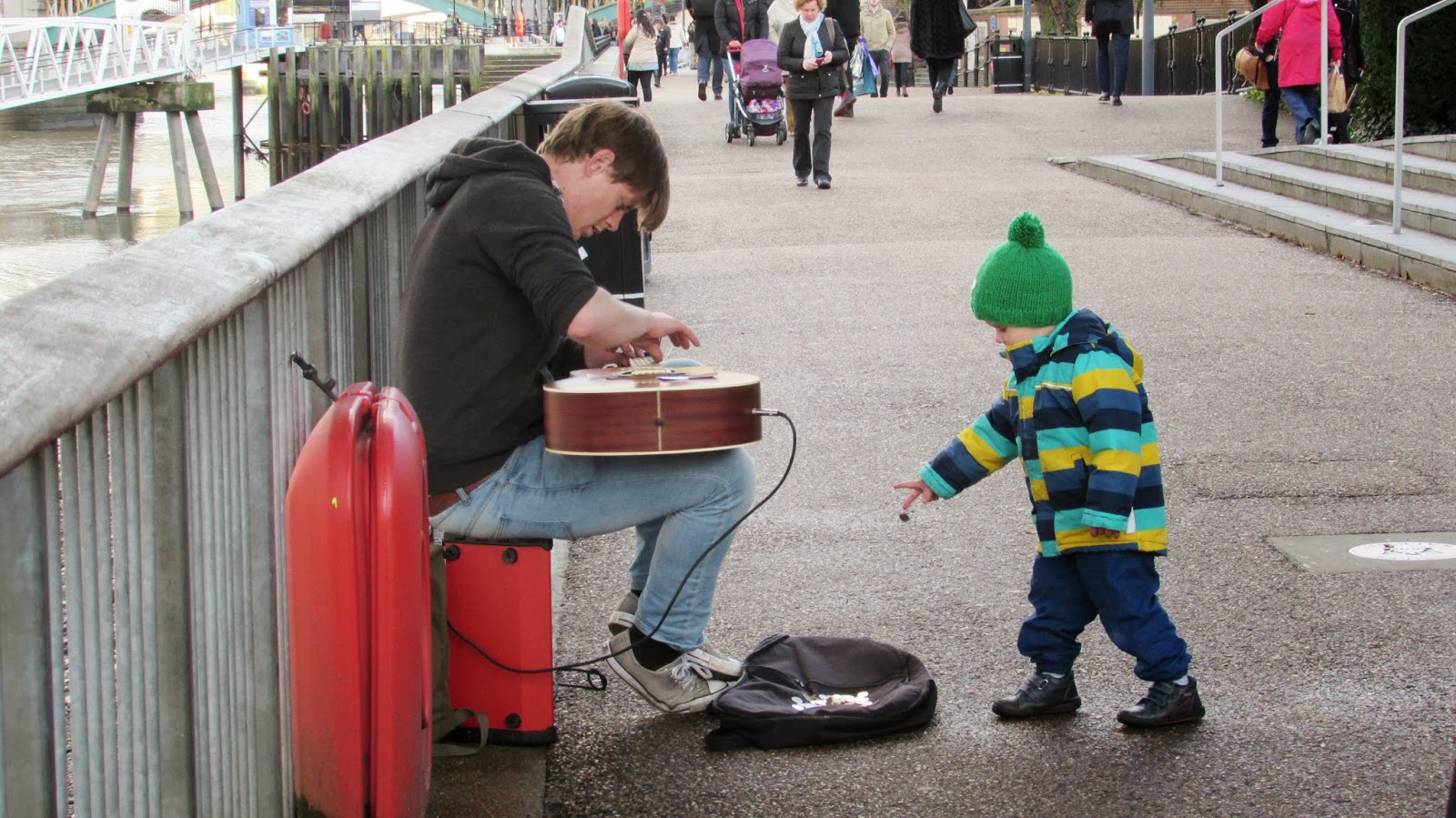 A kid giving money to a busker. The busker was excellent, by the way.

I walked up the street in one direction until it was no longer the street I needed, passing Buckingham Palace and calling that my visit there for the trip. I turned around, after I was already 10 minutes late, and I went into a hotel and asked if they could call the tour office to find out if I had any hope of catching the bus. The tour office told the man in the hotel that I had 6 minutes to get to their last pick-up location. The hotel put me in a cab. After we're driving for a while, the cabbie asked me if I had a map he could look at. He didn't remember the address he was taking me to and he didn't really know the street anyway. We finally got there and he let me know…14£ later. 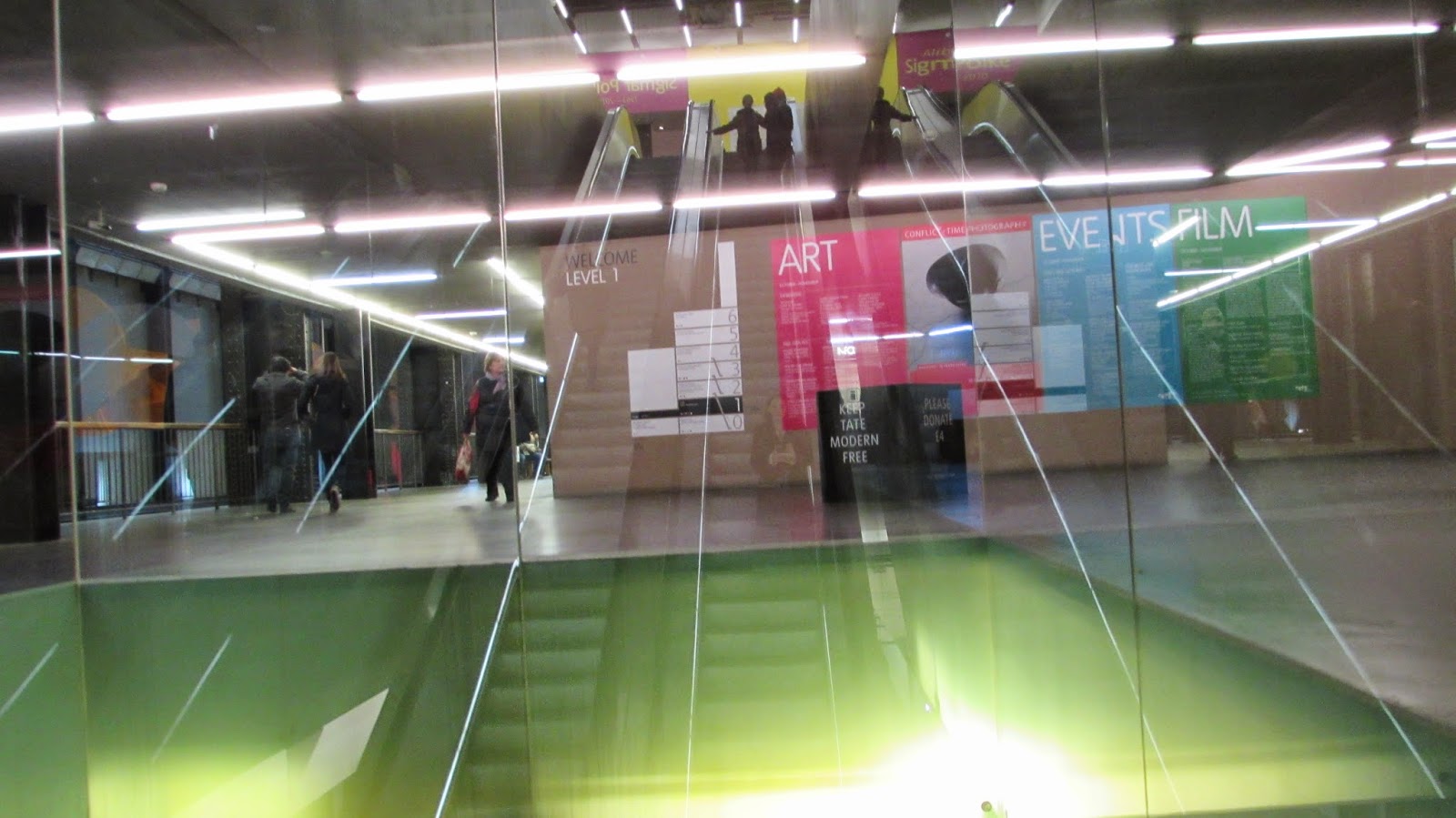 I'm reflected in there.

I got to the tour office and, yes, I was by now very late - almost 40 minutes after when I was supposed to originally get the bus. I was crying. I had to sit down for 10 minutes and calm down before I could even explain to the man in the tour office what happened. He was able to cancel my full-day London tour for the next day and I book a Stonehenge 1/2 day tour, which doesn't go to Bath or anywhere else. It was discounted by 50% because I was so miserable about it. They would be picking me up one hotel over, so I only had myself to rely on getting me to the hotel in time.

I spent the day walking around the city trying to do the things I would have done on the full-day tour. I headed straight to the London Eye and while I was in line...it broke down. They got it fixed in about 1/2 an hour and I was able to ride it. 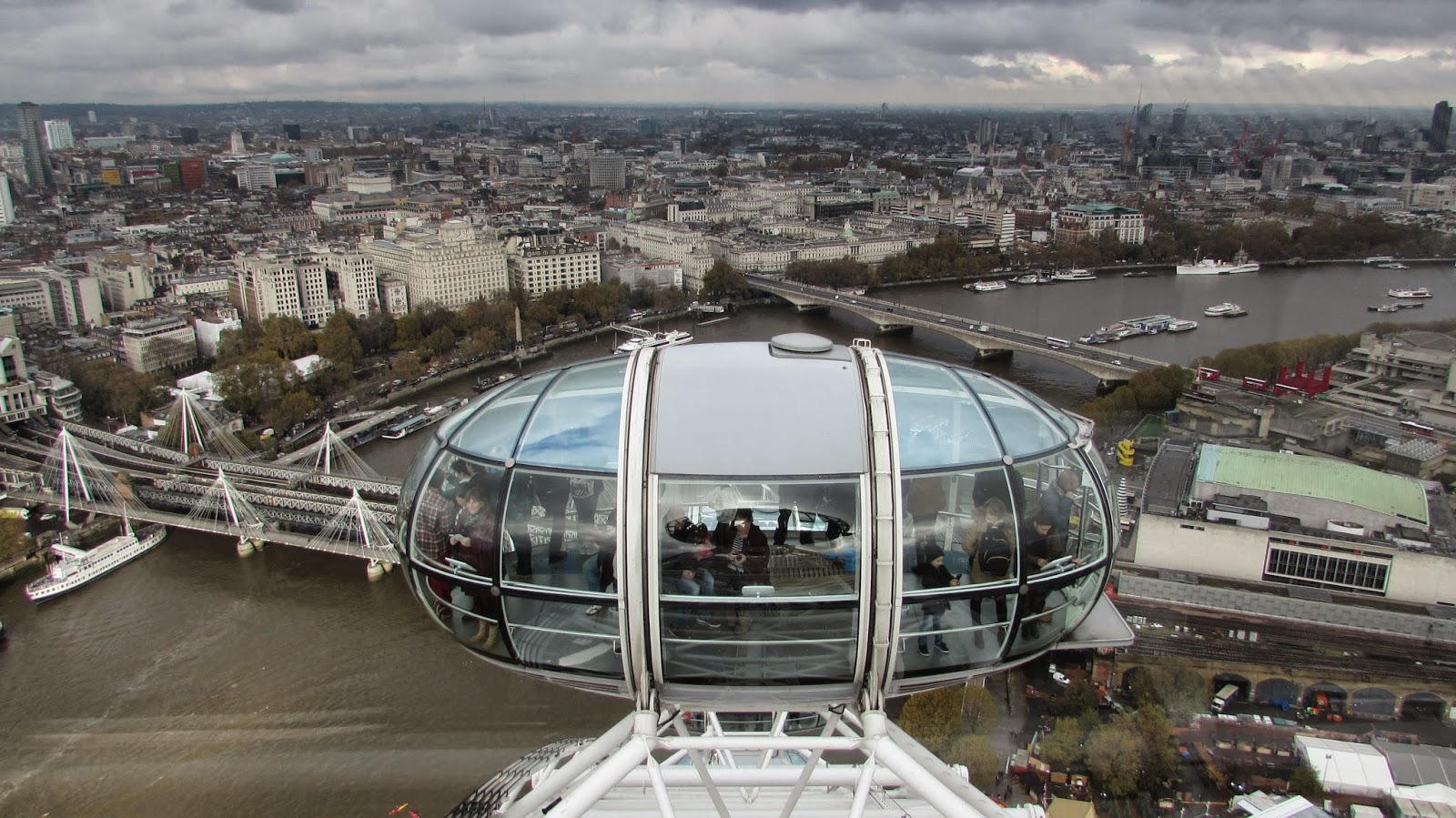 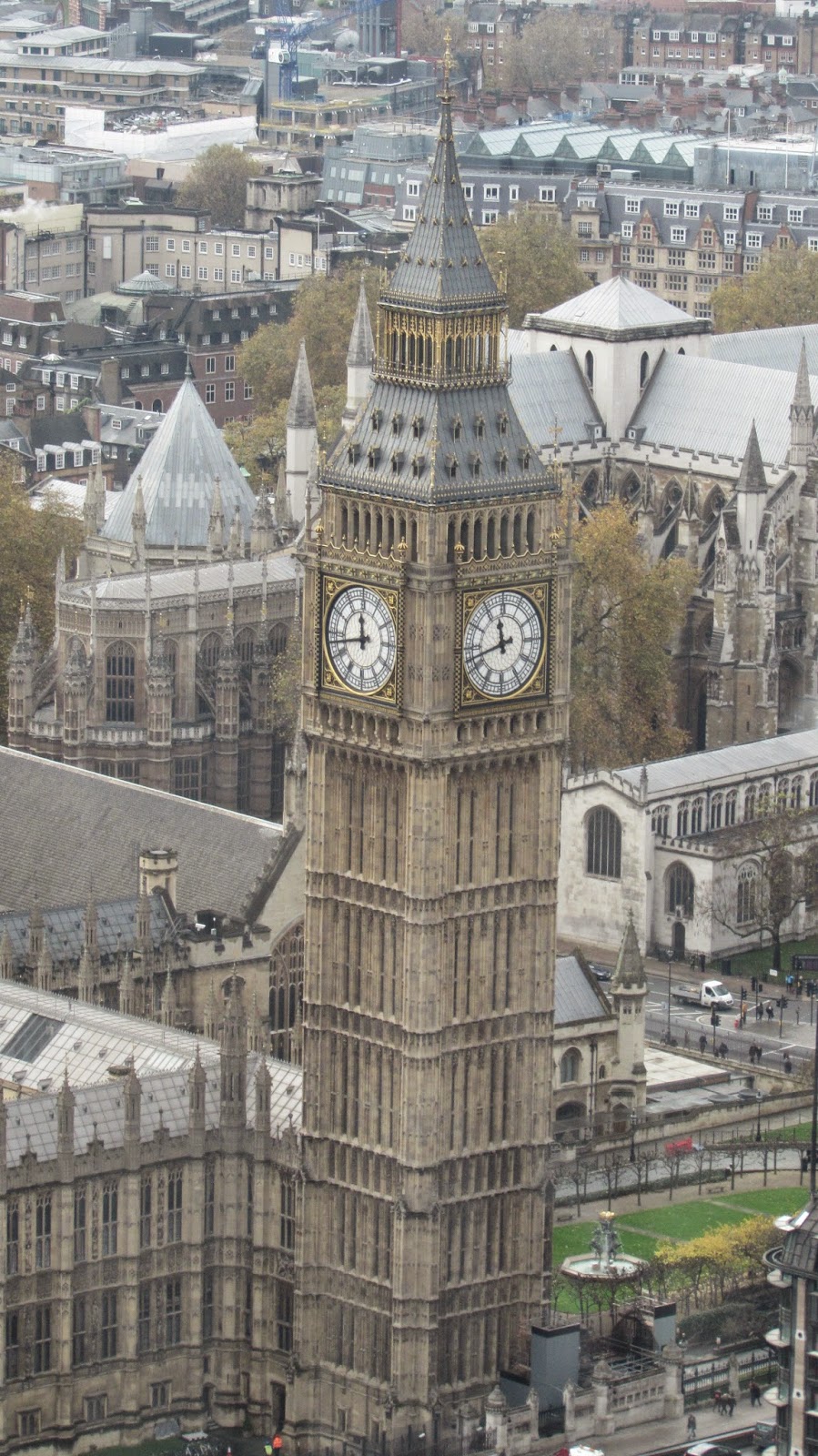 Then I went to the Tower of London, where they were dismantling a memorial to fallen soldiers, where the moat around the tower had been filled with thousands of ceramic poppies. A sign said the poppies were for sale, but I asked in a shop and he said they sold out weeks ago - treating me like I was a little bit stupid for not realizing this. 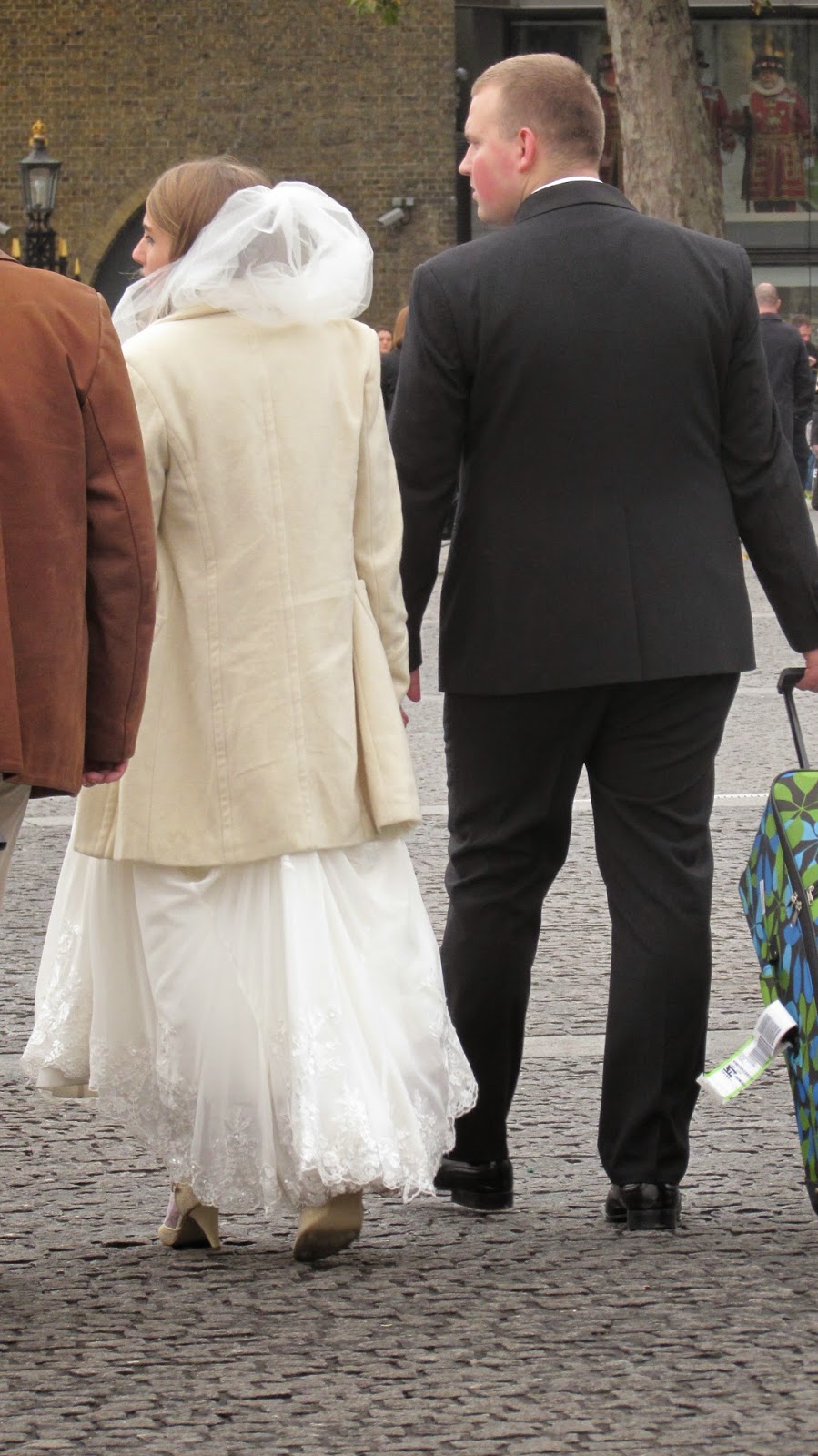 Is the Tower of London a popular wedding destination? 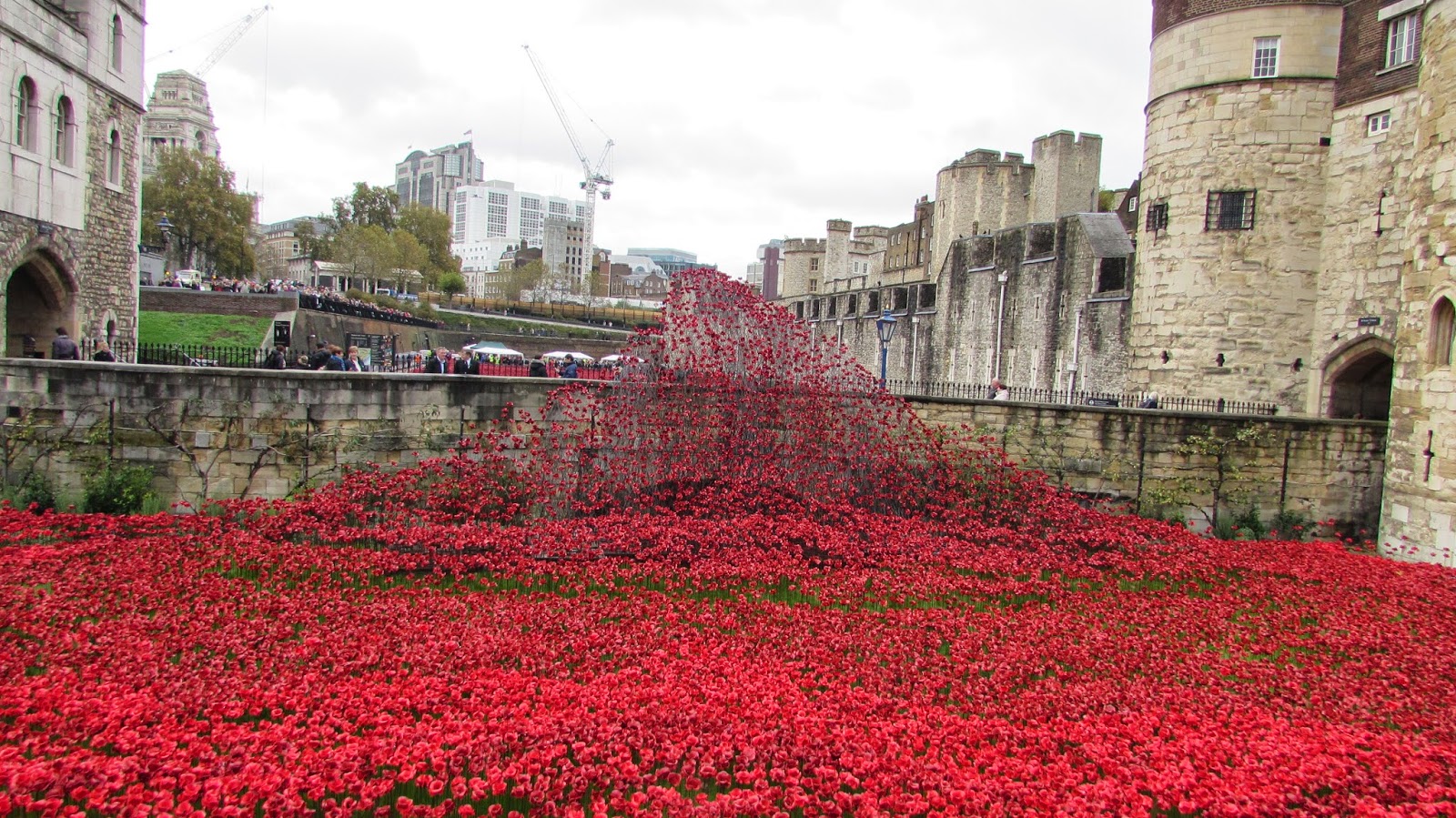 From there I went to lunch and had a veggie burger which was seemed to have been deep fried. I walked to St. Paul's - I don't know if you can go in, but other than the museums, I didn't go in any of these places. 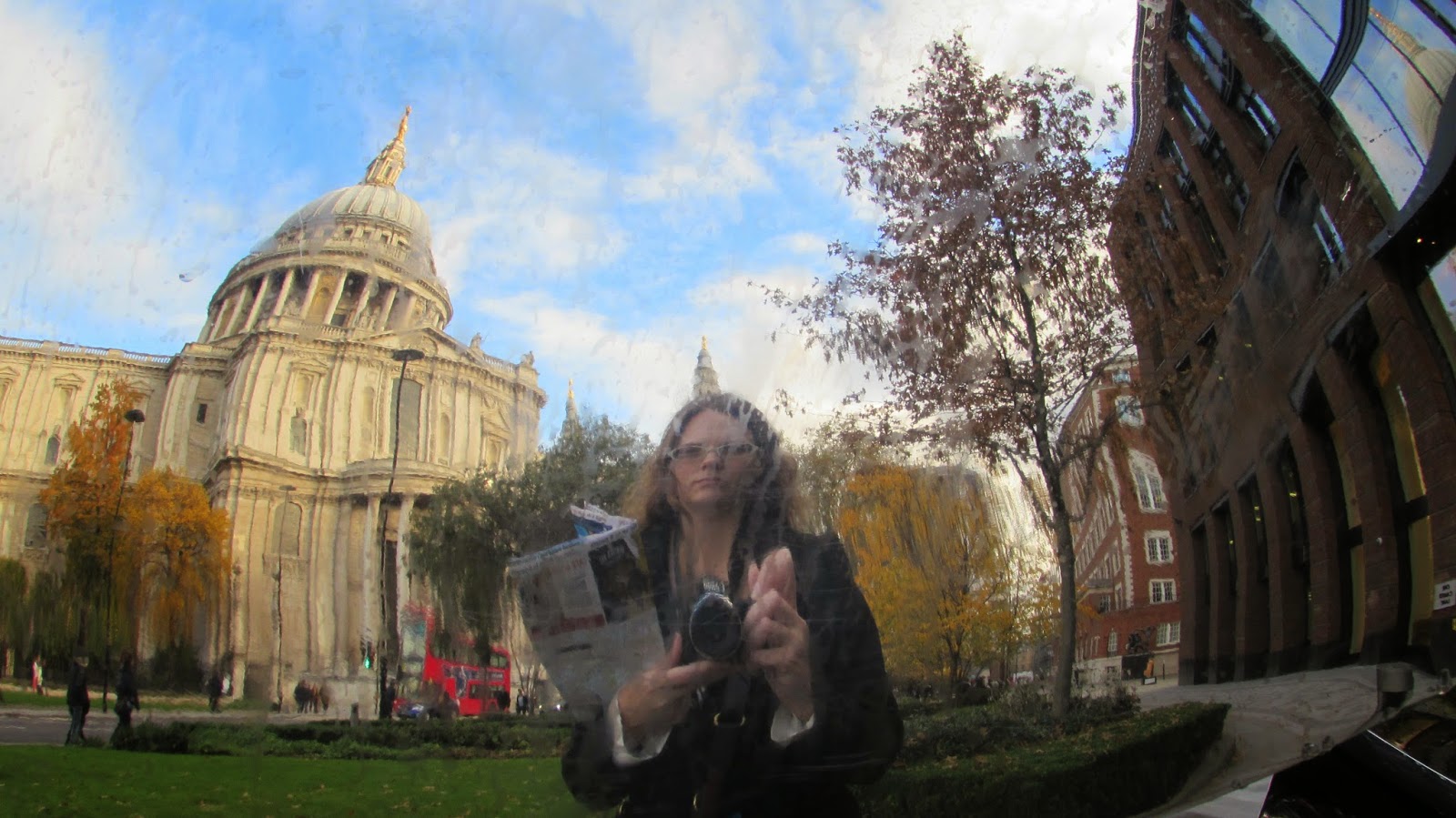 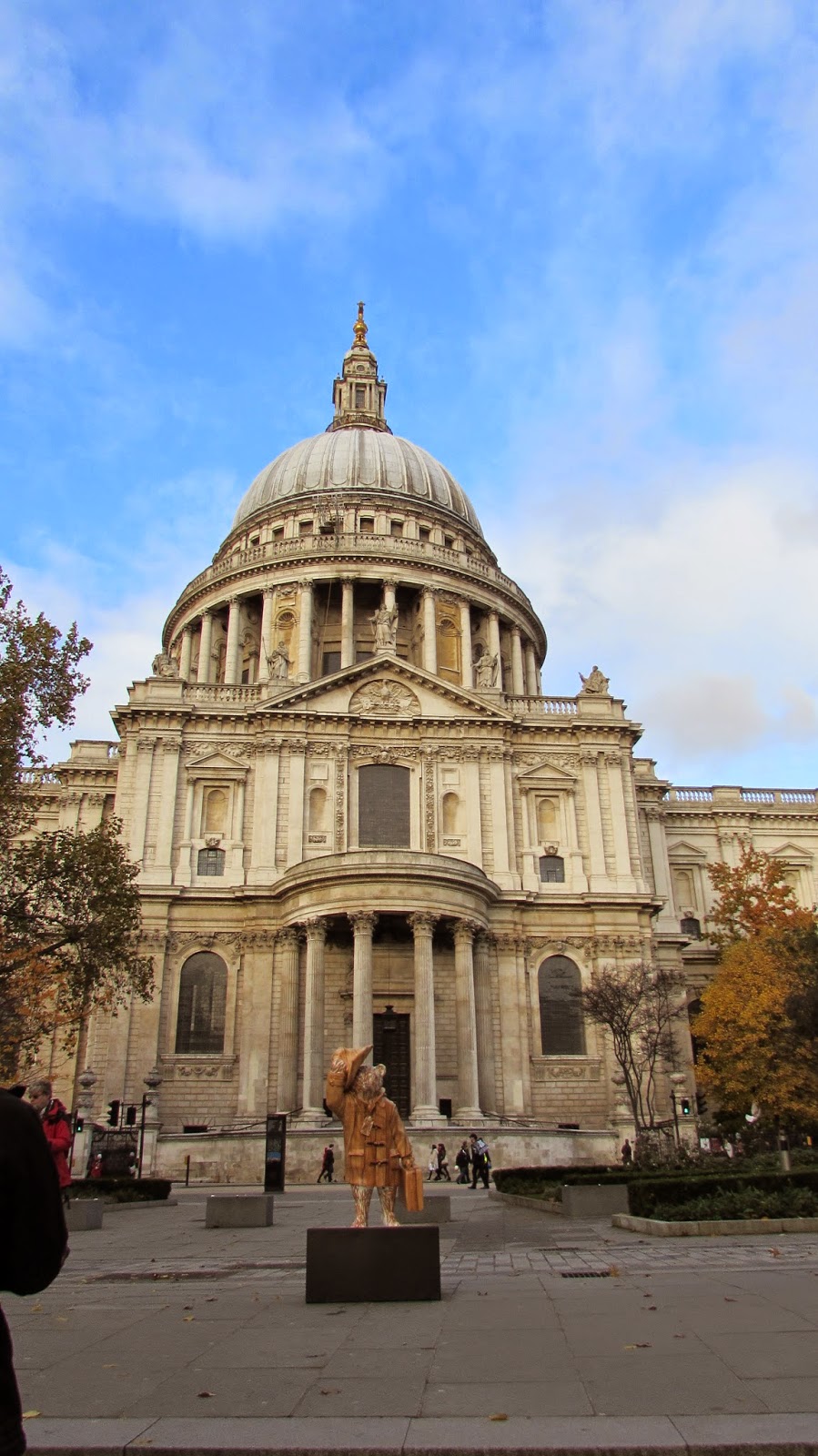 From St. Paul's there is a walking bridge over the river to the Tate Modern. 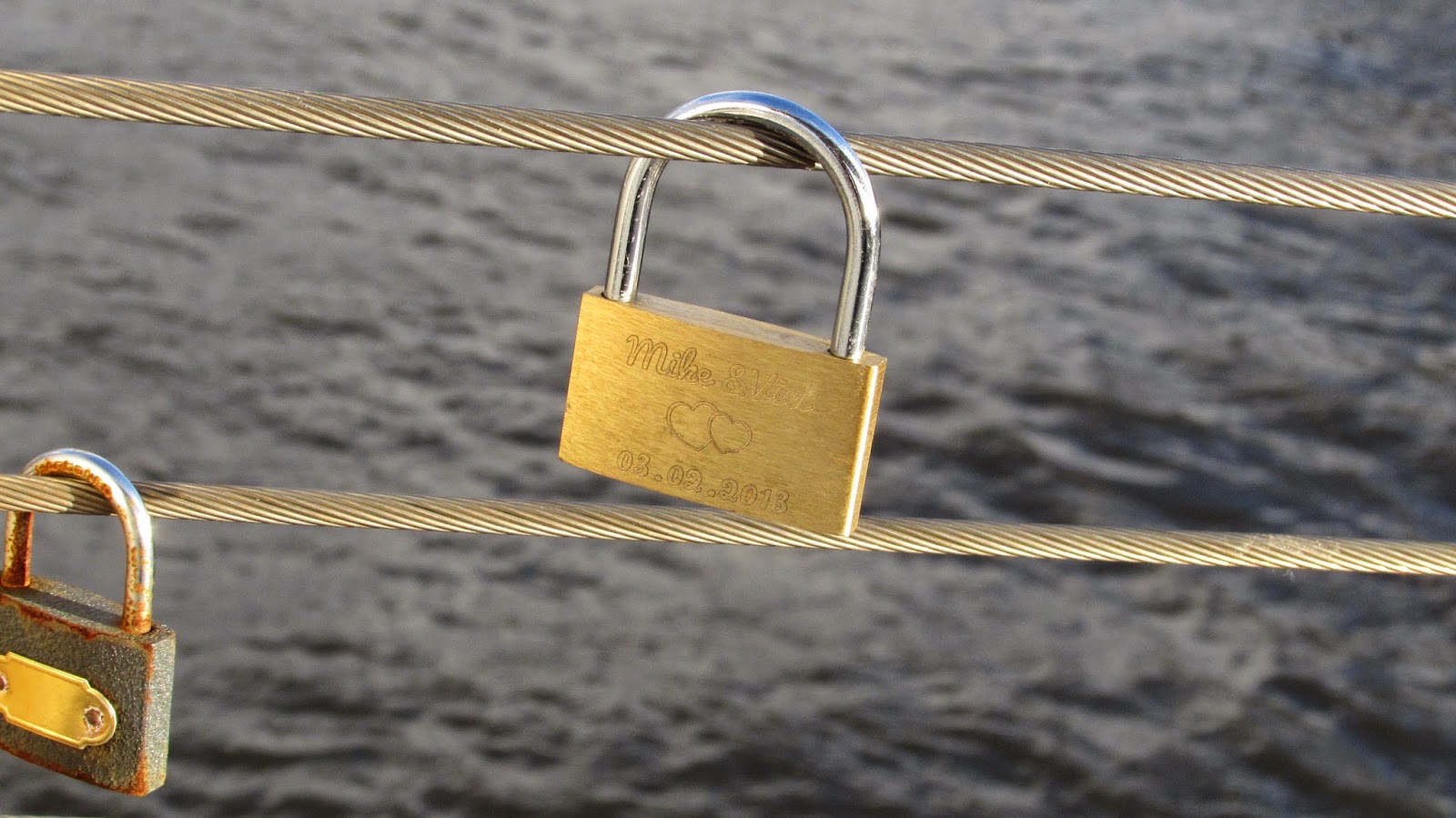 The walking bridge has many locks on it with love inscriptions on them.

All of the museums in England boast being free, but they have boxes inside asking for 4£. I paid it at the Tate Modern when I went in, only to discover that there were 14£ tickets needed for most of the exhibits. I looked at the few exhibits which were free and I really do think modern art is garbage. 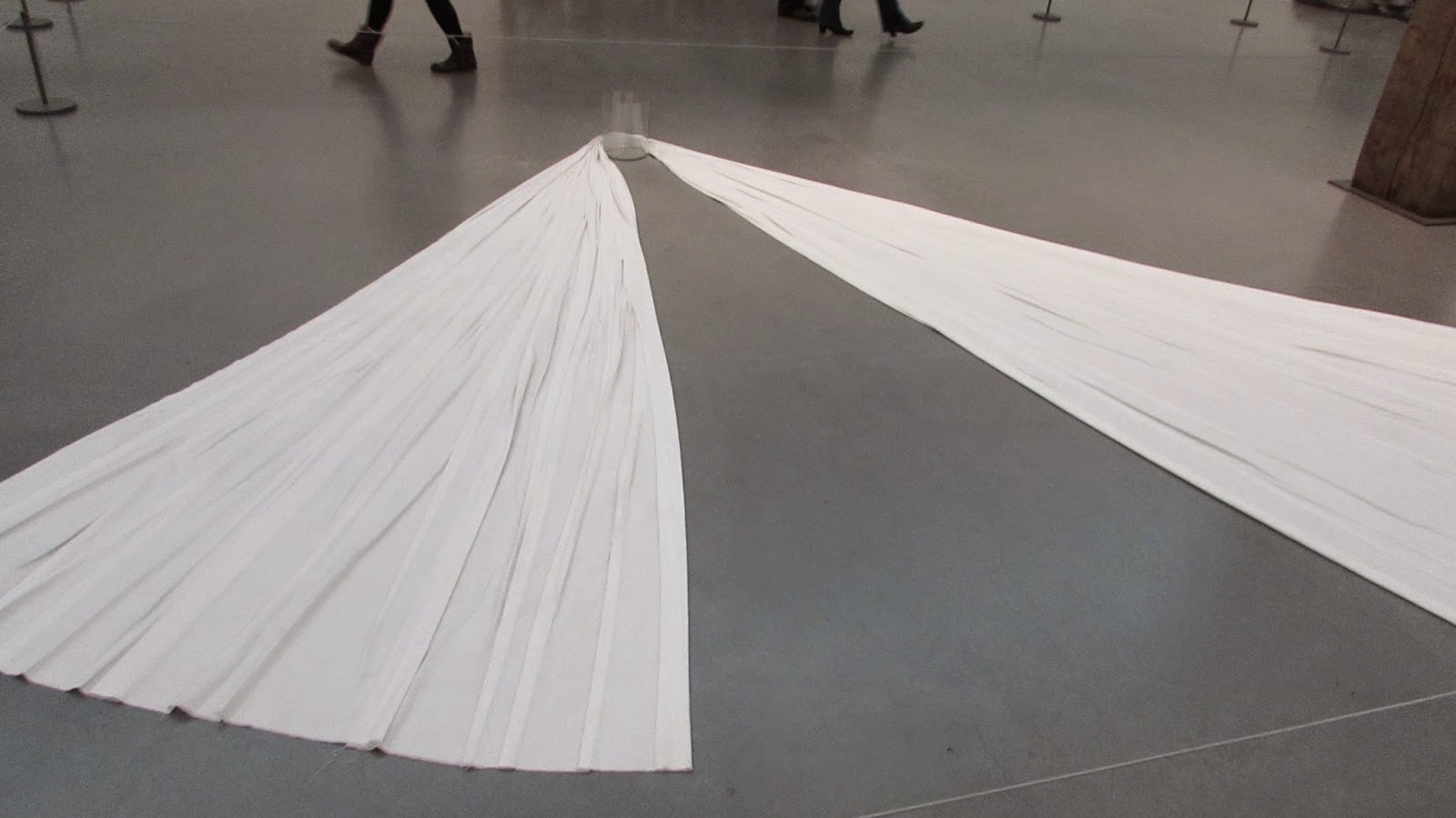 It's just a piece of cloth on the ground!!!!

I walked along the river, back to the London Eye, stopping in a shop to get Richard Ayoade's book (Moss from the IT Crowd), and crossed over the river at Westminster Abbey. Again, I didn't go in. I continued down the river to the Tate (not modern) museum. It also had limited free exhibitions, but I enjoyed the one I saw which was a history of British art, set up by decades. I didn't give them any money, figuring they could get it from the Tate Modern where I wish I hadn't contributed. 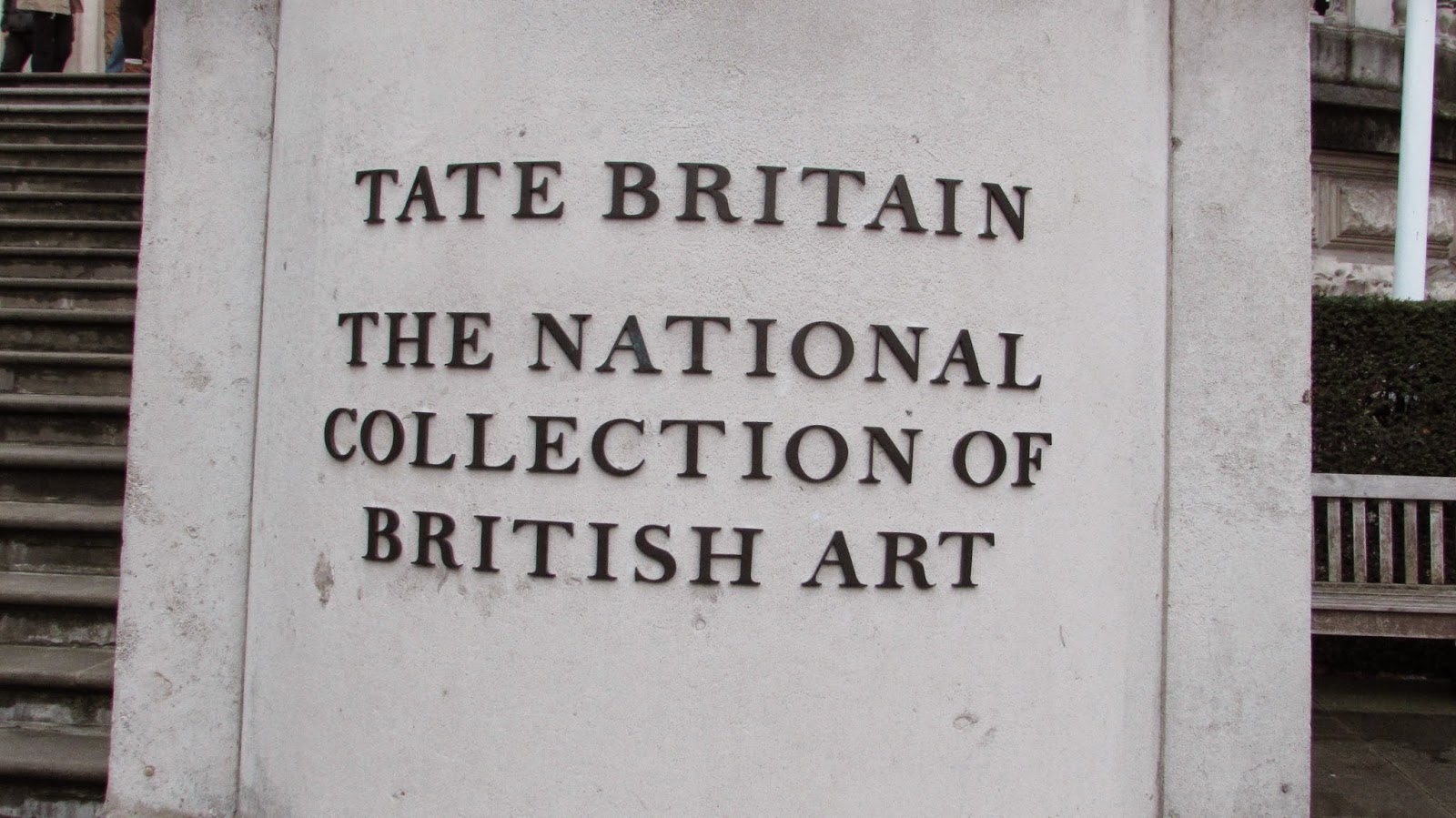 The sun was nearly down, since it was nearly 5 PM, so I got on the underground and came back to the room for a rest. I feel like I'm giving Nice a run for its money here with walking. For dinner I popped down the road to a pub where I had a "jacket" potato with cheese in it. I also ordered water, but never got it. 6£ for just the potato, and that, it seems, would be the cheapest I could eat in London, short of fast food.

Cross your fingers that I see Stonehenge tomorrow.
Posted by Camille Sharon at 5:00 PM