Since I enjoy a good mystery, I decided to try out one of the “cat who” series books by Lilian Jackson Braun. I had no idea how to select a “good” book from the series, so I just picked one that had a good rating on Audible.

The Cat Who Knew a Cardinal was published in 1991, something I didn’t realize until just now. The first “cat who” book was published in 1966 and the one I read was the 12th in the series. There was a big gap between the first three novels and the next, from 1968 to 1986. For some reason, probably because I’ve spent so much time with Agatha Christie in the past two months, as I listened to this book I imagined it was set in a much more distant past than the 1990s. The setting of a small town helped with that illusion. I don’t recall there being any talk of computers or mobile phones. The internet wasn’t really a thing yet and mobile phones didn’t really become a regular thing until the late 1990s. As a result, it didn’t matter that I pictured the story being in “the past,” like anywhere between 1950 and 1970.

I don’t know what I expected of the titular cat, but I was a little disappointed in the cats and their involvement in the crime solving. I know cats can’t solve crime, but the little hype I had heard about these novels led me to believe the cats would be more integral.

Once again, I listened to this story and didn’t read it. It was read to me by George Guidall. I did not enjoy his narration. The lead character in the story, Qwill, is a man. The reading for the men in the story was fine. It was each time the narrator had to voice a woman that I would drop out of the story. He voiced all the women as snippy and short, and I can’t believe they would all have been written that way.

By this time in the continuing story of Qwill, he has two cats, not just one. The original cat Koko is still with him, but now has a companion Yum Yum. The story reminded me in many ways of Murder, She Wrote. It is set in a small town and the focus is just as much on the quirky cast of characters as it is on the murder which has taken place. Perhaps after reading several books I might be more invested in the characters, but with just one I didn’t find them all that likeable.

It isn’t even worth talking too much about the plot, which was fine but not compelling. I’m not saying to avoid the series, but this one wasn’t that great and certainly not the best introduction to the series. I don’t think all of the titles were available on Audible, which limited my options when picking which one to listen to. And some of the comments indicated that on the 2 for 1 offers on Audible the books were abridged versions, which I didn’t want.

Anyway, another one done and two more to go for my year of books! 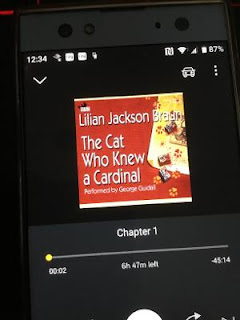 Posted by Camille Sharon at 1:04 PM