If there’s one thing I love, it’s a cozy mystery -- British preferred. I have seen every episode of Murder, She Wrote several times. I can watch Columbo episodes again and again. Agatha Raisin? Loved it. I’ve seen all of Poirot, Father Brown, Miss Fisher, Shakespeare & Hathaway, Rosemary & Thyme, Queens of Mystery and others. Not all of them work for me, but many do. So for my next book, I decided to not go for another memoir but to try a mystery novel instead.

The Murder of Roger Ackroyd is a Poirot story by Agatha Christie, published in 1926. I got the audiobook version, read by Hugh Fraser, who happens to play Captain Hastings on Poirot. He did a terrific job of reading/performing this story, including doing a good Poirot voice.

A couple of things stuck out to me in this novel. First, I must have read it before. Actually read it. I knew who the murderer was almost immediately. I’ve only read maybe three Agatha Christie novels, millions of years ago, so I thought it would be unlikely that I would select an audiobook of one of those that I’ve read, but that’s what happened.

If you’ve ever read any Agatha Christie, then you will know that guessing the murderer is nearly impossible. She withholds vital information until the very end, or introduces a new character at the very end. One of my favorite movies, Murder by Death, has a speech near the end about the frustration of reading stories by a writer like Christie. I found a copy of the speech online, which might not be accurate, but you get the point:

“You've tricked and fooled your readers for years. You've tortured us all with surprise endings that made no sense. You've introduced characters in the last five pages that were never in the book before. You've withheld clues and information that made it impossible for us to guess who did it. But now, the tables are turned. Millions of angry mystery readers are now getting their revenge. When the world learns I've outsmarted you, they'll be selling your $1.95 books for twelve cents.” -- Lionel Twain

That sums up my experience. So when I watch an episode of Poirot or Marple, I don’t try to figure out who did it. That is an impossible task. I just enjoy seeing the detective at work. Christie is a good writer and reading or listening to her work is enjoyable.

The second thing that stuck out to me was how easy her stories are to adapt to TVs and movies, which is probably why they remain so popular. The novel sounded almost like someone reading a screenplay. The dialogue was complete. The characters were complete. The locations were visual and the story was engaging.

I tried to find the TV version of this story, but for some reason it isn’t available on the subscription services I have, and I don’t want to pay extra just to watch it. Maybe I’ll change my mind, but for now that’s where I’m at.

Overall, this was a great title to listen to while pulling up crabgrass in my yard, and I’m leaving the door open to listening to more stories written by Agatha Christie. 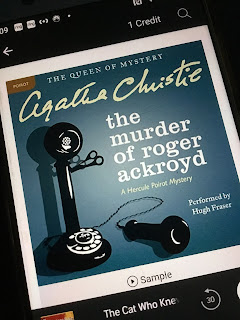