Nordstrom’s is almost as well known for its return policy as it is for being a luxury shopping store. There are unbelievable stories all over the internet covering how wonderful and unexpected the return policy is.

Several years ago, they did change part of the policy, no longer accepting special-occasion dresses if the tags had been removed. No problem. We all know from sitcoms that those dresses are bought, worn to the event and returned to the store whenever possible, so stores need to protect themselves. The remainder of their policy is vague, at best.

It clearly says there is no time limit for returns or exchanges, but it also says they don’t really promise to accept any returns.

They also only refund in the way the original purchase was made, or with a Nordstrom’s gift card. You can’t bring in something which was purchased with a credit card and walk out with cash. Fine. No big deal. I’m sure I could find something to buy at Nordstrom’s - especially if I could get the credit for Nordstrom’s Rack instead.

It’s a different story of how I got the things I tried to return, but lets just say I know of a lot of things with the potential to return and have a couple. I took in two things as a test. I wanted to see if the return policy lived up to the hype.

I brought in a pair of earrings, with the original price tag still attached and the original receipt. The receipt verifies things like the earrings were purchased at Nordstrom’s in Topanga, July 15, 2014. The cashier was named Doris. The method of payment was a Nordstrom’s credit card. They were on sale, although no discounts were handwritten on the price tag or calculated by the cash register. The price tag was for the sale price, with the original price also printed on it. 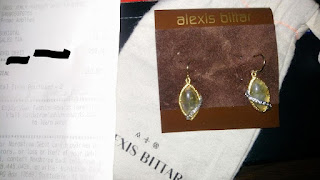 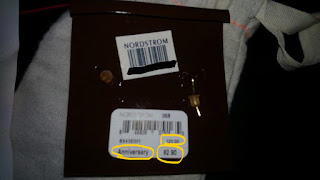 I also brought in a watch, which was in the original packaging, clearly never used (not a scratch on it) and with the original price tag, although it had been removed from the watch and was just in the box. The hands on the watch hadn’t even been moved. They were in the factory setting of 7:25 with the second hand perfectly aligned over the hour hand.

I went to the special “returns” section of the store, thinking they might be more helpful with this unusual case than any regular cashier, even though store cashiers are able to take basic returns. The young man who helped me first tried to scan in the bar code on the receipt for the earrings. Even though I have the receipt, it is worn out and the bar code wouldn’t scan. He didn’t try typing the numbers in. Instead, he scanned the special little return tag that places like Nordstrom’s and Macy’s attach to items when you buy them. Theoretically, scanning the return tag will bring up all of the details of the shopping purchased during the same trip.

The scan turned up nothing in their computer system. I was really confused why the earring return wasn’t going well. I asked if there was anything we could do. He had his manager come over. She did the same thing - scanned the return tag. It didn’t bring up anything in the computer. She scanned the return tag on the watch. It also didn’t bring up anything.

I felt like I was talking to a character from Little Britain. “Computer says, ‘no.’”

“We can’t accept these returns.”

But you have the receipt, the price tag, the return tag and the obviously never worn item. “Computer says, ‘no.’”

And here comes the not great part of the return policy which Nordstrom’s doesn’t publicize. I was told this. I’m not making it up. “See on the tag where it says ‘anniversary?’ That means it was part of a special sale.” They don’t accept returns on those items once the special sale ends. Oh. But this doesn’t seem to match the on-line information which is someone shrugging like, “We’ll probably take it back?”

Apparently they don’t accept returns on “anniversary” items, things which are seasonal, things from brands they no longer carry, or only carry occasionally. “But you carry the watch brand?” “Yes, but that was a limited-edition watch. We can’t take it. Computer says, ‘no.’”

I asked if there was an easy way to determine if something was eligible to return without coming into the store. Yes. You look on the Nordstrom’s website. If they still sell it, you can return it. But if the item has gone on sale, you will probably only get the sale price returned, not the full purchase price. So anything you bought which sold out or was seasonal in any way, you probably can’t return. I wasn’t clear on if it has to actually be still available for sale, or if it could be something which shows up on their website as “sold out,” as long as it was still showing up on the website. Bottom line, if the computer can’t scan it, nothing will make the return happen. A person is not able to use their eyes and verify that the receipt, price tag, return tag and item all match up and are in perfect condition.

I left Nordstrom’s with the watch and earrings and the advice from the manager of “just sell them on eBay.” Like I didn’t already think of that myself! What brilliant advice! It would have saved me a lot of hassle if Nordstrom’s did what they brag about, but all that brag is is hot air.