As always (or soon to be always), here's the video followed by the original script I wrote for myself which may or may not be what I actually ended up saying.

Today I’m going to talk about the job of Spotting List creation. The job title for this could be “English Editor,” “Spotting Editor,” “Spotter,” or more generically part of the “English department” or “International Versioning” department.

When I worked in an English department, I didn’t have to really do much spotting, but I am aware of the basics of it. This is mostly a job for the theatrical team and not the TV team. You can start with the dialogue list as a template, but the spotting list doesn’t include every little thing that the dialogue list does.

You will mark an in-time and an out-time for each entry, hopefully the software you are using will calculate the duration and you write down not only who is speaking, but who they are speaking to.

The spotting entries are ultimately used as a template for subtitles. If you have seen a movie that has been subtitled, you have seen some of the constraints of a spotting list.

The spotting entries are restricted by how many characters they can have which will fit on a screen in the average font size, and the duration of an entry is restricted by good old-fashioned film. If I recall correctly, a spotting entry can only be eight seconds long and should always be at least one second long. Different companies will probably have their own rules about subtitle duration. As for characters, I think a subtitle can have 80 characters (smaller than a tweet) on two lines.

The spotting editor has to make a lot of decisions about what should be included in the subtitles and what shouldn’t be included. If someone coughs, that isn’t included. Think of it this way: for a dialogue list/dubbing, the entire English part of the soundtrack is removed and replaced. For spotting, the soundtrack is left in the original version and subtitles are added to enhance the experience for someone who doesn’t speak the original language. The film still has the coughs, the burps, the heavy breathing, so none of that needs to be included in the subtitles.

The spotting editor also needs to decide if a line of dialogue should be re-worded to either make it shorter to fit in the subtitle or to get the point across a lot faster. If someone says “no-no-no-no-no-no!” the subtitle file might just say “no-no!” Keep it simple and enhance what is already happening.

Likewise, the walla isn’t generally included in the subtitles, but call out lines will be.

You’ll also have to watch the subtitles back and make any adjustments to their placement on screen. The subtitle file needs to include notes about when a standard subtitle might fall right over a sign on the screen, which the viewer should be reading. And most of the time, the subtitle file will also include these text items which are important to the story so that they are included in the translated subtitle file.

Because subtitles are meant to be read, the reading speed also needs to be considered while writing them. You don’t want people to panic because the subtitles are too short, or spending too much time staring at them when important things are happening in the action.

What is the reason this job exists: This list, called a spotting list, gets sent to a translator for subtitling. That way every translator is given the same record of the spotting, including timings, and it isn’t up to them to try and figure out the English version before translating it into whatever language they specialize in.

It also gets included in something called a combined continuity and spotting list, or CCSL, which I’ll talk about more in a different video, when I talk about what continuity is. But the biggie, is that it gets sent to a translator.

Many spotting lists also have to have something called annotations included, but I’ll talk more in depth about annotations in another video.

Example: Here’s a little example of what a spotting list looks like. This is just from my video, to give you a basic idea of format. 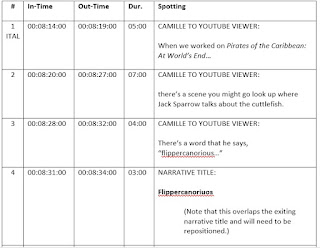 Qualifications: English fluency, fast typing. More so than on a dialogue list, you will probably have to use software supplied by the client, which will have the ability to calculate the durations of the subtitles, saving you a lot of awkward math. Their software should also superimpose the text on the movie as you write it, so you can sit back and watch it, checking for errors in placement or speed.

Tests: You will, most likely, have to take an English test to get this job. The tests are almost always “open book,” meaning you can look up things on-line or in the style guide the company you are testing for uses (Chicago/AP). And a house dictionary.

The test will probably also include some proofreading items - finding spelling errors or when the wrong character is identified as the speaker of a line.

Training: This job isn’t given a lot of training, unfortunately. If you freelance, you are kind of on your own and expected to already know the basics of how to find the in-time for an entry and how to match the format in a sample they will supply. If you work at a company, they usually say they will train you, but everyone is too busy to really do it, so again, you’re on your own. The faster you are at figuring things out and self-directing, they better off you’ll be.

What kind of person is this good for:

People who are a little bit more freewheeling than the dialogue list people. You need to be confident to make changes to the text as needed to enhance the experience, without changing the meaning. That’s a confidence I don’t have. I have no trouble writing down exactly what I hear, but second guess myself too much even just changing a word from “gonna” to “going to.”

You also need to not get too offended if changes are made to your files.

The downsides: A lot of projects have tight deadlines.

Also because of global production, having a deadline of 9 pm on a Sunday night isn’t unusual so that files are ready for someone in India as soon as they get to work Monday morning, or to be trying to finish something in London’s overnight so they have something ready in the morning.

If you are part of an English department, your job will not only be creating spotting lists. You will need to be able to do some of the other jobs within the department, like dialogue list creation, annotating and proofreading.

If you can get a job at a company that does this for big studios, you can make enough to survive, but you won’t be getting rich. I was salaried when I did this for a company, and that is a bad deal. If you have a choice, stay hourly. My mistake was accepting a promotion to supervisor, which they would not pay hourly.

Like with so many things, it comes down to who you work for. I don’t accept freelance work of this kind because it isn’t financially viable for me. Even though I type very quickly, my level of attention to detail kills me in the number of hours/pay ratio department. Most freelance work will either pay you a flat fee for a reel or TV show, or give you a price per run-time minute. So a 22 minute reel could pay anything! But you should be told the rate of pay in advance and then can decide if you can fit it in to your schedule, if it is worth it to try or not.

I hope I’ve helped you figure out if Spotting Editor is something you would be interested in pursuing. Or that at least it helps you get a little bit better understanding of this job. Things people do from nine-to-five in Hollywood.

If you have any questions, please feel free to ask them below. Don’t forget to subscribe so you can see all my videos and learn more about what people in Los Angeles who aren’t rich and famous do.

Posted by Camille Sharon at 6:54 PM