I grew up in San Antonio, Texas. In case you don’t know, that’s just on the edge of the Bible Belt. I’d guess that Southern Baptist was the dominant religion at the time of my youth in San Antonio. My parents were from St. Louis and had lived in New York before moving to Texas. My mom was a practicing Catholic. My dad… There’s this thing in Texas where if you go to a new church (not Catholic) and sign their guest book, they show up at your house with a pie. At least that was a thing in Texas. For a while, my dad shopped churches. For the pies. He would go with my mom to church as long as it wasn’t the “jingle bell choir” - guitars. Otherwise he’d often try a new one when he was in the mood for a pie.

Being raised Catholic is something which creates a lasting impression even if you don’t stick with it. Lots of guilt. Lots of believing without believing that there is a hell and you are probably going there. Lots of feeling watched and judged all the time, even at home alone.

Beside the lifetime of repressed Catholic thoughts, being a Catholic in Texas means you aren’t a Christian. You are something else. Not quite as bad as being a heathen, but to some people maybe you are?

I’m not sure that this applies just in Texas, either. Story time.

I make jewelry and my most popular YouTube jewelry tutorial is the tree-of-life pendant. I like to make them (tree-of-life pendants) and it sort of became my signature piece. I will make them out of copper wire and do what I can to keep the cost to me down under $5/ tree - excluding labor time. If I’m out in the world (in the before times) and someone compliments the tree-of-life pendant I’m wearing I’ve been known to pull one out of my purse and give it as a gift. When I went to Europe in 2014 I carried several extra to give to people who were kind to me, not knowing if I’d need them. I did, but you can read about that on my other posts about my trip to Europe.

I was in Ross one day and a woman complimented my tree-of-life pendant. I pulled one out of my purse and gave it to her. It was a copper tree with black beads. “Don’t you have another color?” Um, that doesn’t seem like an appropriate question when you’ve been given a spontaneous gift, but regardless of what I might have in my purse, the answer is no. “No.” “Oh, it’s just black… It’s the devil’s color.” I didn’t know that. I like black. I thought God made all the colors, including black. “Are you a Christian?” she asked me. “Well, I’m Catholic.” “Oh, so you’re not a Christian. Do you have some time for me to tell you the good news?” “No.”

Anyway, even in a Ross Dress-for-Less in Los Angeles, being Catholic does not make you a Christian. End of that story.

I knew a handful of Jews growing up. And by handful, I can distinctly remember two of them right now. Colin and Benji. One of my mom’s good friends from New York, Shelley, was Jewish. I think I just assumed it was a different religion and that even more than I didn’t get counted as a Christian in Texas, they didn’t get counted as Christians. At least for them it was because they weren’t.

Let me tell you another story. My next-door neighbors, until I was about 11, were Southern Baptist. During the summer, instead of going to summer camp (I’ve never been), I know at least one summer I went to vacation Bible school with the neighbors. It was a lot of fun. We sang a lot. We colored a lot. It was SO much better than CCD. I understood why, if there was a choice, you would choose Southern Baptist over Catholic.

I went to church with them one Sunday and I was presented with a huge Bible to take home. I was under 11 and given this super-fancy, expensive Bible. My parents weren’t convinced they had just given it to me, but I went with the neighbors and they brought me home with it. I could hardly hide the thing. They accepted that’s what happened. End of that story.

I moved to California in 1997, when I was 23. I got here in September, I think, and by December I was working at a small post production company in Hollywood. My boss ran the company with his wife. They were Jewish. I met an editor there named Gene. He was Jewish. Another employee at a company we did a ton of work with, Karl, was Jewish.

I had a huge crush on Karl, and probably still would if I saw him again. My boss knew this and said, “But he’s Jewish.” My boss thought I was very Catholic (I wasn’t). I thought my boss was telling me that because Karl was Jewish, he only dated Jewish women. I bought a book called What Does Being Jewish Mean and read it. It was for kids, but I think that’s also a good start for a Texan young woman. (I looked for it to take a picture of, but I don’t think I still have it. I’d read it and I’ve moved a few times since then. And my cat pees on lots of things and I have to throw them away.)

I remember part of a conversation I had not long after with Gene where I insisted that Judaism, being Jewish, was just another religion. “Like I’m Catholic, you’re Jewish.” That wasn’t how Gene saw it. He was an immigrant from Russia (at a young enough age you would never know). To him, being Jewish was his race.

For my April book report, I read Jews Don’t Count by David Baddiel. I’m a little bit of an Anglophile, when it comes to things like entertainment and architecture (I think the monarchy is stupid), so I follow David Baddiel on Twitter and read a lot of reviews and comments about this book.  Although there are a lot of incidences talked about in the book which have not made the news here in the States, there is a lot which is universal in it. The part I struggle with, that being Jewish is not just a religion, but a race, is part of what the book confronts. I haven’t solved it within myself, but I’m doing what I can to understand.

There’s no way to say the next thing without sounding incredibly patronizing, but some of my best friends are Jewish. But they really are! My dearest friends, who I would do anything for and who I would rely on if I was in a jam, are Jewish. The friend who would took me to the hospital for surgery at 4 am. The friend who flew with me to Texas on 2-day notice to help me clean out some things from my mom’s house. (Katherine and Arrika, if you are wondering since I’ve provided other names.)

I don’t feel like I can write a standard book report for this book. It’s isn’t a story. It is a very long essay which asks the reader to be contemplative. I’ve been doing that. Part of what I contemplated was if I should even write that I read the book.

Why? Because I know that anti-Semitism is so prolific on the internet, that even just to write about this book I’m opening up the possibility I’ll be attacked. I have a choice to talk about it or not, so I should. The people who regularly get attacked, online and in the real world, don’t have a choice.

But that might be the extent to which I talk about it. You should read it. You should think about it. You should sit with it and consider if there are times in your life when you’ve been dismissive about anti-Semitism as not being as serious an offence as other forms of racism. I hope I haven’t, and I hope that if I do, my friends will feel comfortable enough to let me know. 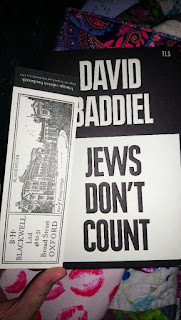 Posted by Camille Sharon at 8:58 PM