It's All About Perception

Not all tape measures are created equal. Unless you buy a calibrated or certified measuring tape, it is legal for the measuring tape to be off of accuracy by 1/32 of an inch for every six feet. I would imagine if you pick up a cheap measuring tape at the dollar store, the accuracy could be off by more than that. Same goes for rulers. And scales. Unless you are using an expensive scale at the doctor, there will be some margin of error.

Imagine, these things which we assume are fact, like how long an inch is, have some wiggle room. It depends on your tools and how accurate they are. Aside from this being good to know and a reason to always use the same measuring tape when working on a project, it makes you wonder about how differently things can be perceived.

I have tinnitus, and have for as long as I can remember. A constant buzzing/ringing in my ears. The closest thing I can think of to describe it to someone who doesn’t have tinnitus is, you know the noise crickets and cicadas make? Now imagine that a little bit higher in pitch and never-ending. Every once in a while it will end, for a second or two. Like all of the sound suddenly sucked down a drain. But it quickly returns and there it stays. Putting my hands over my ears just means I can hear it better. I’m used to it, but it is part of my perception of the world. The world buzzes. All the time.

Think back on that infamous blue/black dress. To me, it always and only looked blue and black. But my perception doesn’t match the perception of a lot of people. We all have different experiences, so different that something which we think should be a “fact,” like the color of something or what “quiet” is, don’t match up from person to person.

I bet about now you’re wondering how I’m going to bring this back around to perfume, which seems to be all I can talk about lately. Here we go!

I’ve been trying out various perfume samples the last few weeks. I always start the same way, spraying them on a piece of paper, or a tissue, or a napkin, and smelling them on the paper. One of the ones I got, as soon as I smelled it on the paper I said, “No!” and moved the paper away. But I know that things smell differently once you put them on, so I tried that one on, and…I like it. I like it when it is actually on me. The ginger which repelled me from the paper doesn’t stand out when I wear the perfume. In fact, the perfume in question, Whispers of Time, is so light and subtle, I can’t smell it on my skin after a couple of hours.

I debate with myself if a perfume which last such a short time is good or bad. And actually, it’s both. It’s good because it gives you the opportunity to put on something else after a few hours, but bad if you wind up just putting the same thing on, since the bottle won’t last as long. It is also good if the perfume you tried on turns out to be a stinky mistake. It doesn’t linger and make you regret the spray.

Similarly, the Mickey & Minnie perfume smelled overpoweringly like vanilla on the paper. But I tried it on and found it much nicer once I was wearing it. I get a lot more of the coconut on my skin, and the fragrance is lighter on my skin than on the paper, so I don’t feel like I’m drowning in vanilla and coconut.

I broke down and got the big bottle of Mickey & Minnie. Here it is: 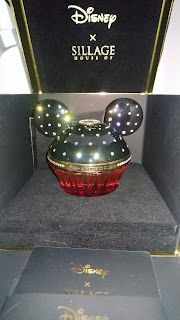 Look at that! Such a nice bottle. And it came in a black and gold fancy box. I was going to buy Whispers of Time, but it was out of stock when I made my purchase. 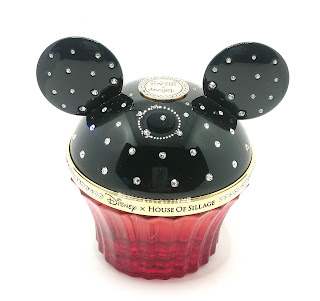 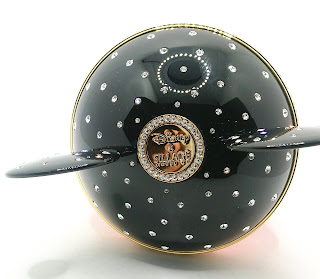 Why now? you may be asking yourself. I mean, I’m not done collecting the Trend purse sprays yet. Why would I move on to the large bottles? Two reasons. Mickey & Minnie is limited edition and might not be available by the time I really figure out if I am committed to it. And they were giving away some items with purchase. So I purchased. For Whispers of Time and Mickey & Minnie, my perception changed when the delivery method of the scent changed. From paper to skin. It made a difference.

The gift with purchase was a full-sized perfume called Whispers of Innocence and a matching lipstick holder bow, with a tube of lipstick. I also got a sample of Whispers of Innocence, which seemed a little thoughtless to me. Hey, if you like the big bottle you just got, why not try it in a small bottle to consider buying a big bottle! 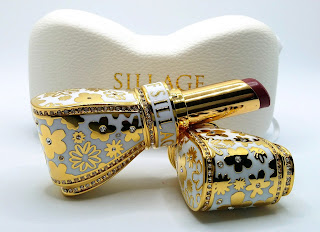 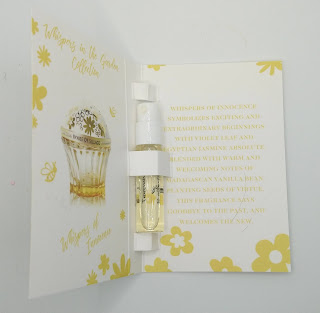 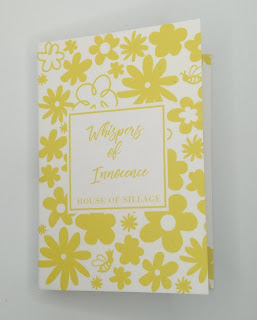 I don’t understand why the bow lipstick holder doesn’t come with a lipstick as standard. It should. But that is a complaint for another day.

Whispers of Innocence has a lot of jasmine in it. But to me, when sprayed on paper, it smells like gardenias. I researched if jasmine and gardenia are thought to smell the same. The answer is no. But to me, in this perfume, they do. I have jasmine growing in my yard, so I think I know what it smells like. And I’ve smelled gardenias before. But this perfume, meant to smell of jasmine smells of something else to me. 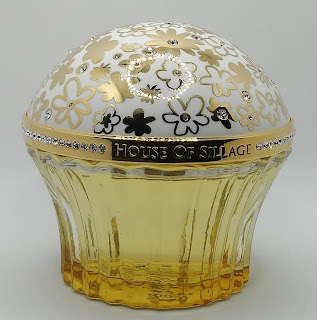 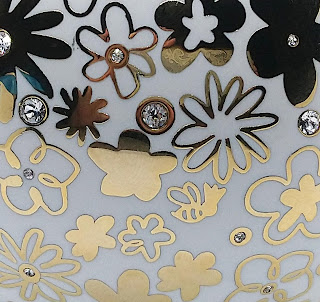 I love the little queen bee on the lid. I haven’t decided yet to take the plunge and graduate it from paper to skin. I think it will have to happen very close to shower time the first time, so I can go wash it off if it doesn’t settle on me. I took a chance on a gift with purchase, and it might not have worked out. Anyway, the bottle is really cute.

I also expanded my collection of the Trend sprays with the Trend#4, United We Stand. Wow. It STINKS! I have to classify this as the worst of that collection, so far. Very strong, very lingering. So… I don’t think I can even get past the smell enough to try it on my skin. And just because I think it stinks, doesn’t mean everyone will think it stinks. It’s supposed to be comprised of frangipani (which is another word for plumeria) and parijata (which is another word for jasmine). 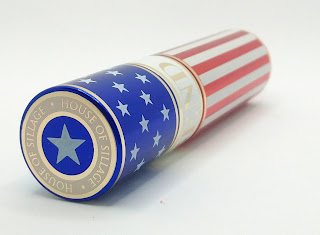 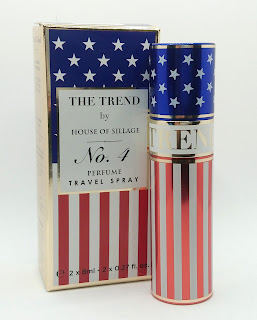 Similar to when I make jewelry, I understand that not everyone shares my taste. I will always remember being commissioned to make a blue, black and purple necklace. Left to my own whims, this never would have happened. And even though I didn’t like the result, my client was happy.

Posted by Camille Sharon at 1:32 PM