Nice in the Rain

The hotel served a breakfast buffet for 10€. I could decide for myself if I wanted to partake after going down in the morning and looking at it. Their idea of a buffet and mine seemed to not overlap - rotting fruit and dry cereal. I asked the day concierge where I could get a "real" breakfast and she sent me down the street. The "real" breakfast (omelet, salad, pain au chocolat, half a loaf of French bread, a hot drink and orange juice) was called a New York breakfast at this place, which also made a big deal of selling "American" bagels.

Rested and fed, I set out to find the old city, Vieux Nice, without looking at a map. I thought I knew the basic location (after having been there about 20 years prior), so I started walking down the Promenade des Anglais, with the Mediterranean to my right. 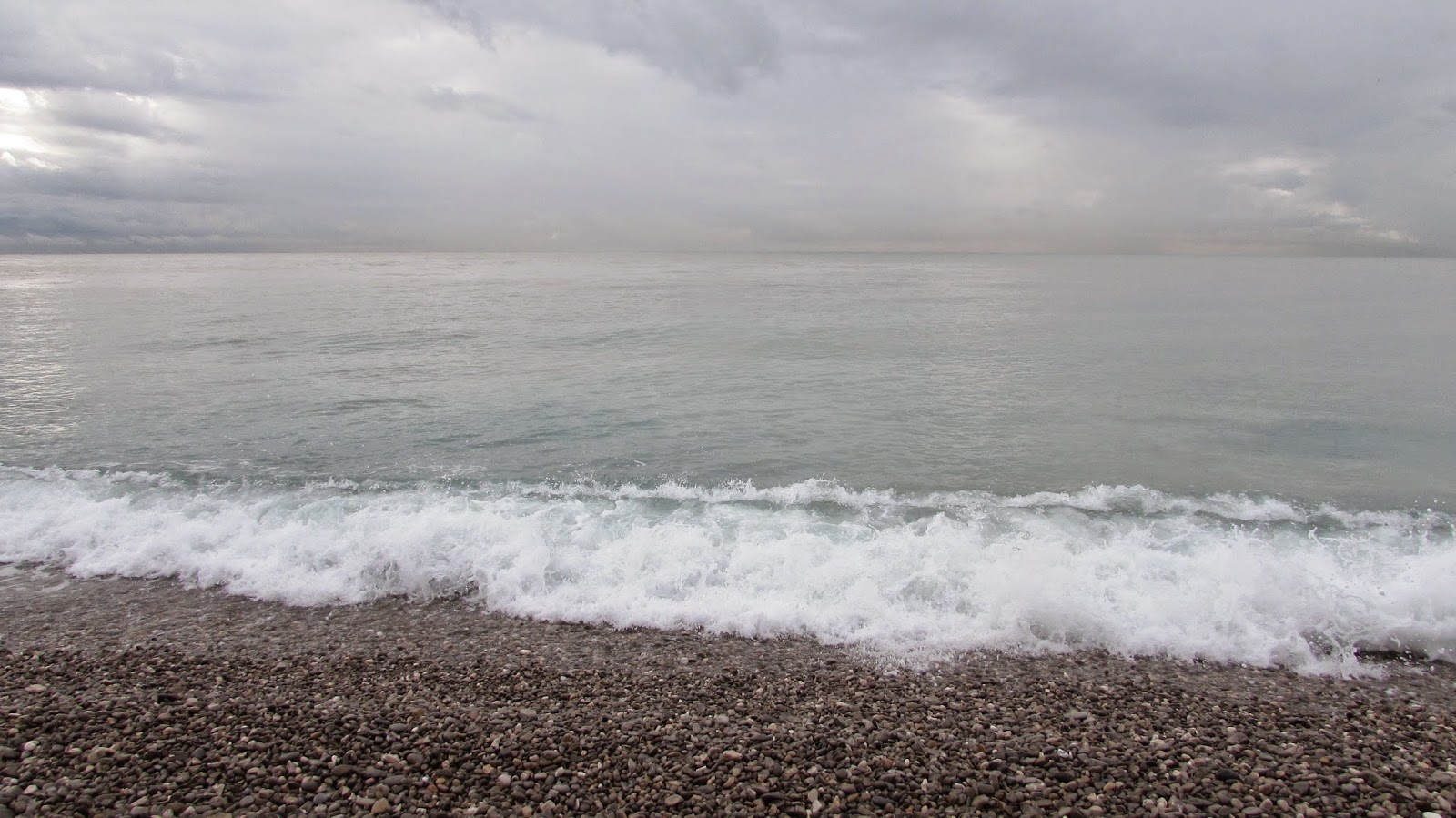 I saw a new park area, so I went over and checked it out. 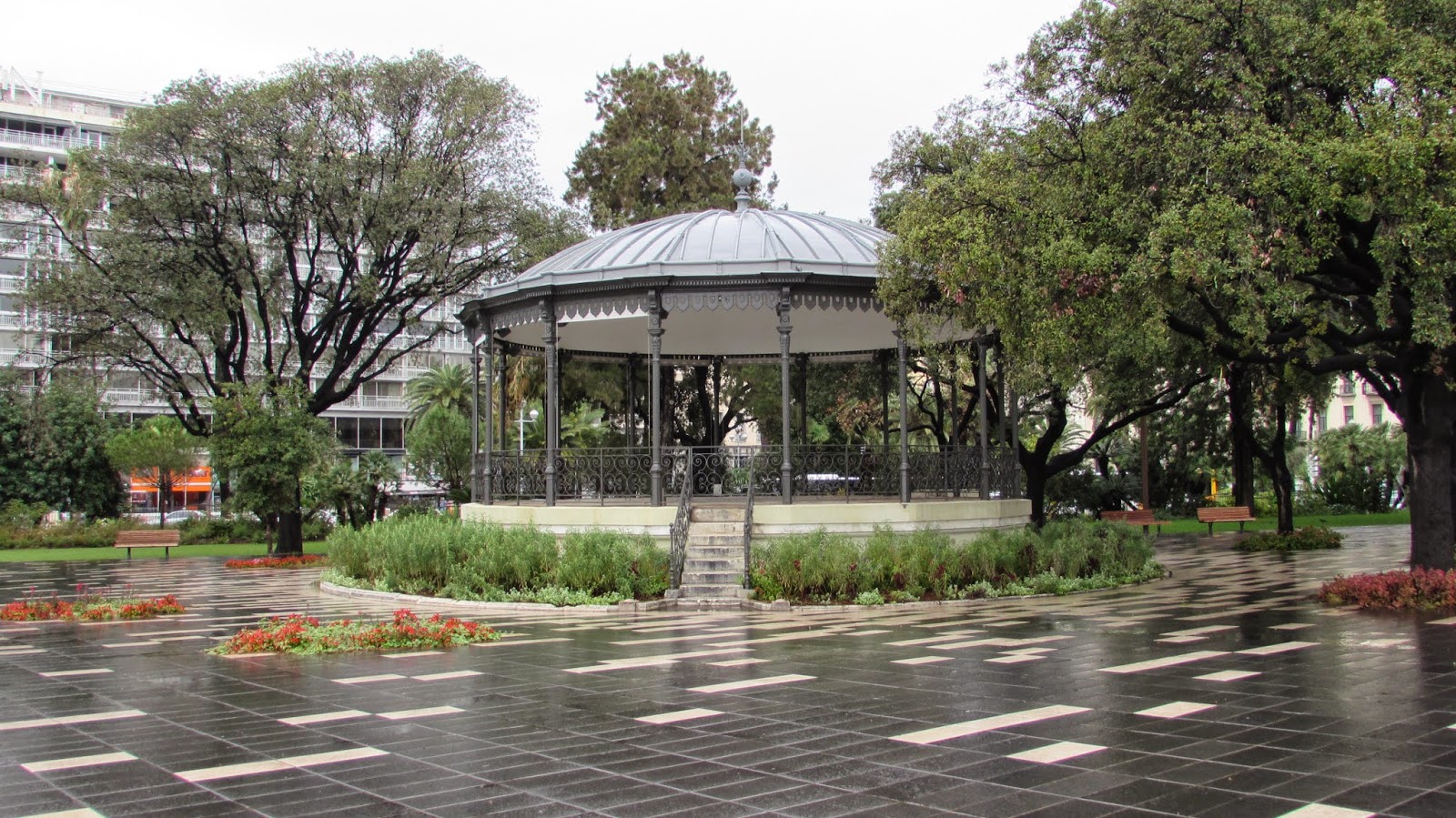 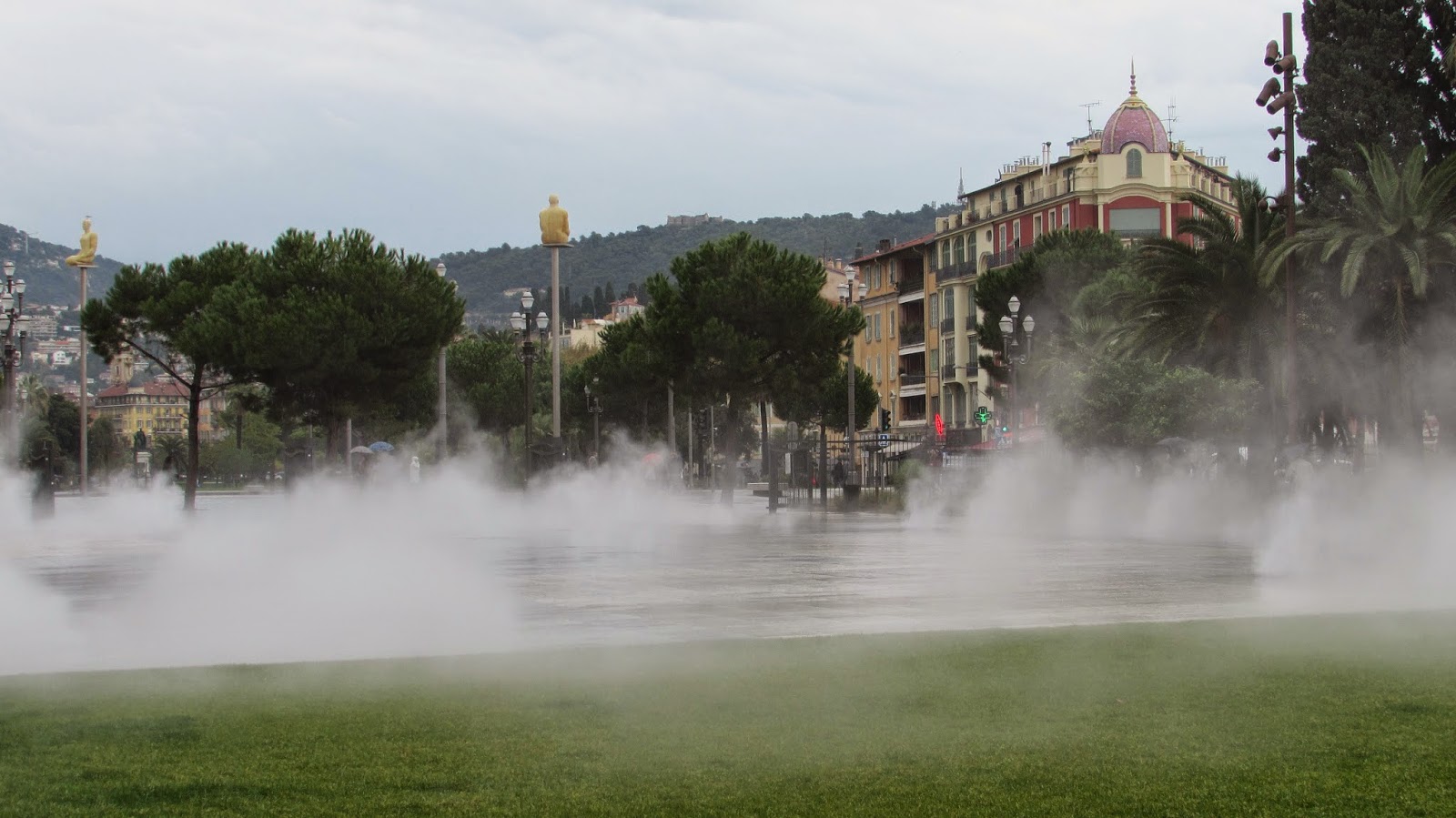 I then followed signs toward Vieux Nice, but the signage in Nice could really stand some improving. I wandered around for a while. Eventually I found the old city and wanted to revisit a square with a church in it which I had been to when I was in college. There were lots of signs on the wall pointing to lots of different churches. I followed sign after sign and saw lots of churches, but not the one in the square I was thinking of. 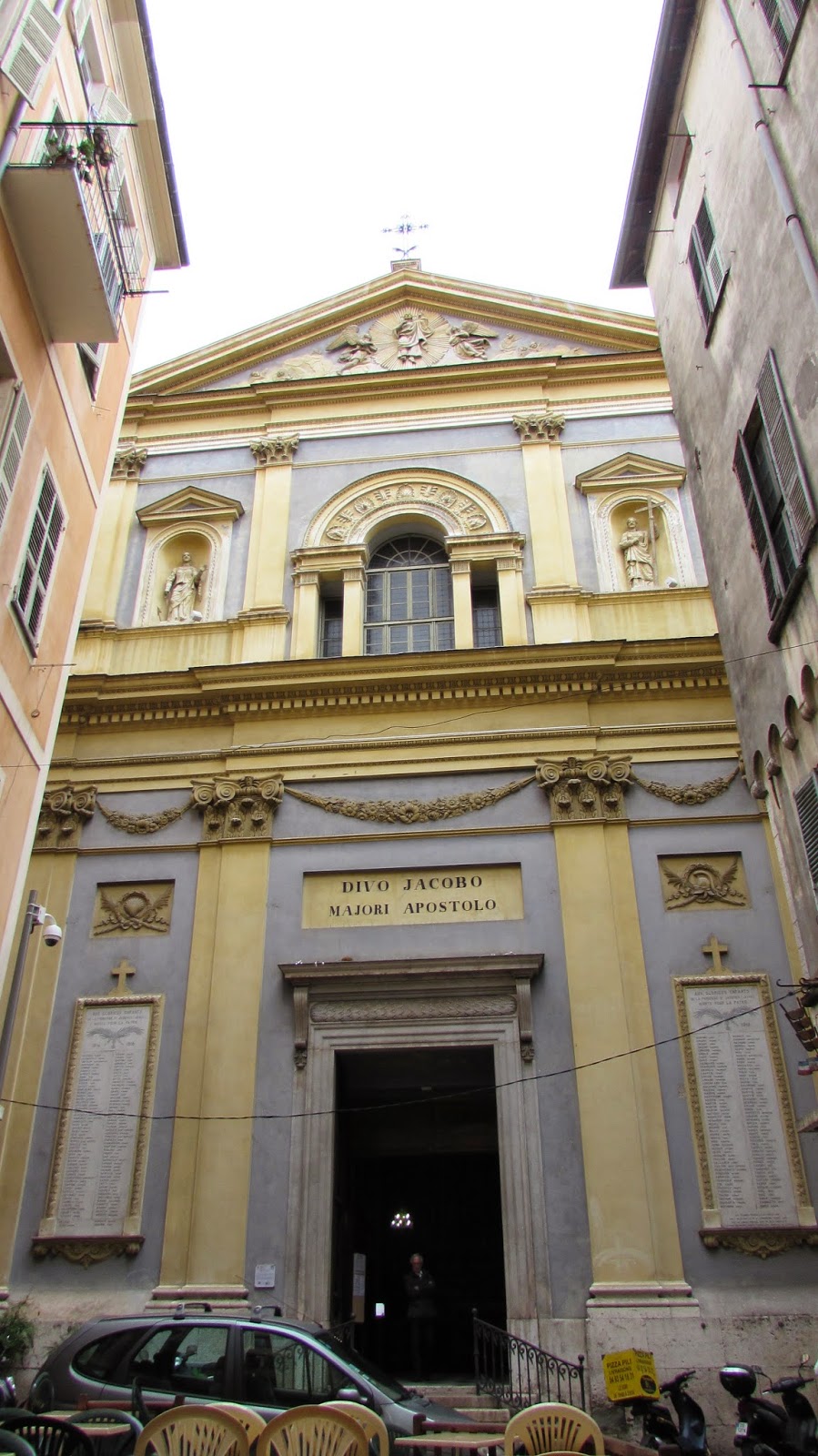 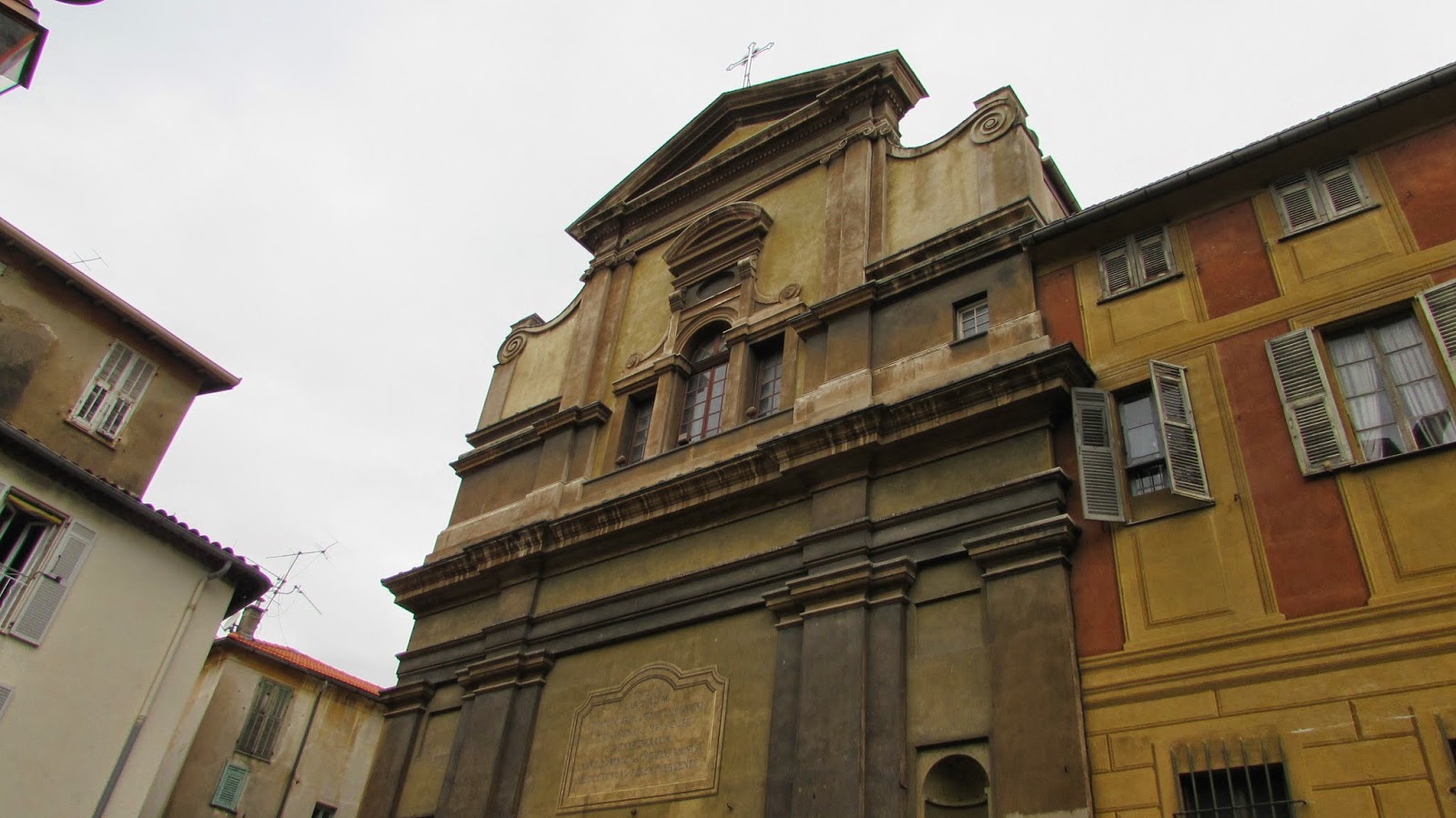 After walking around and around and asking a bathroom attendant for directions, I finally gave up and had lunch. I was so ready to sit down.

The waiter who pulled me in to the restaurant gave me a free aperitif, sans alcohol, and, although I didn't drink it, limoncello after the meal. 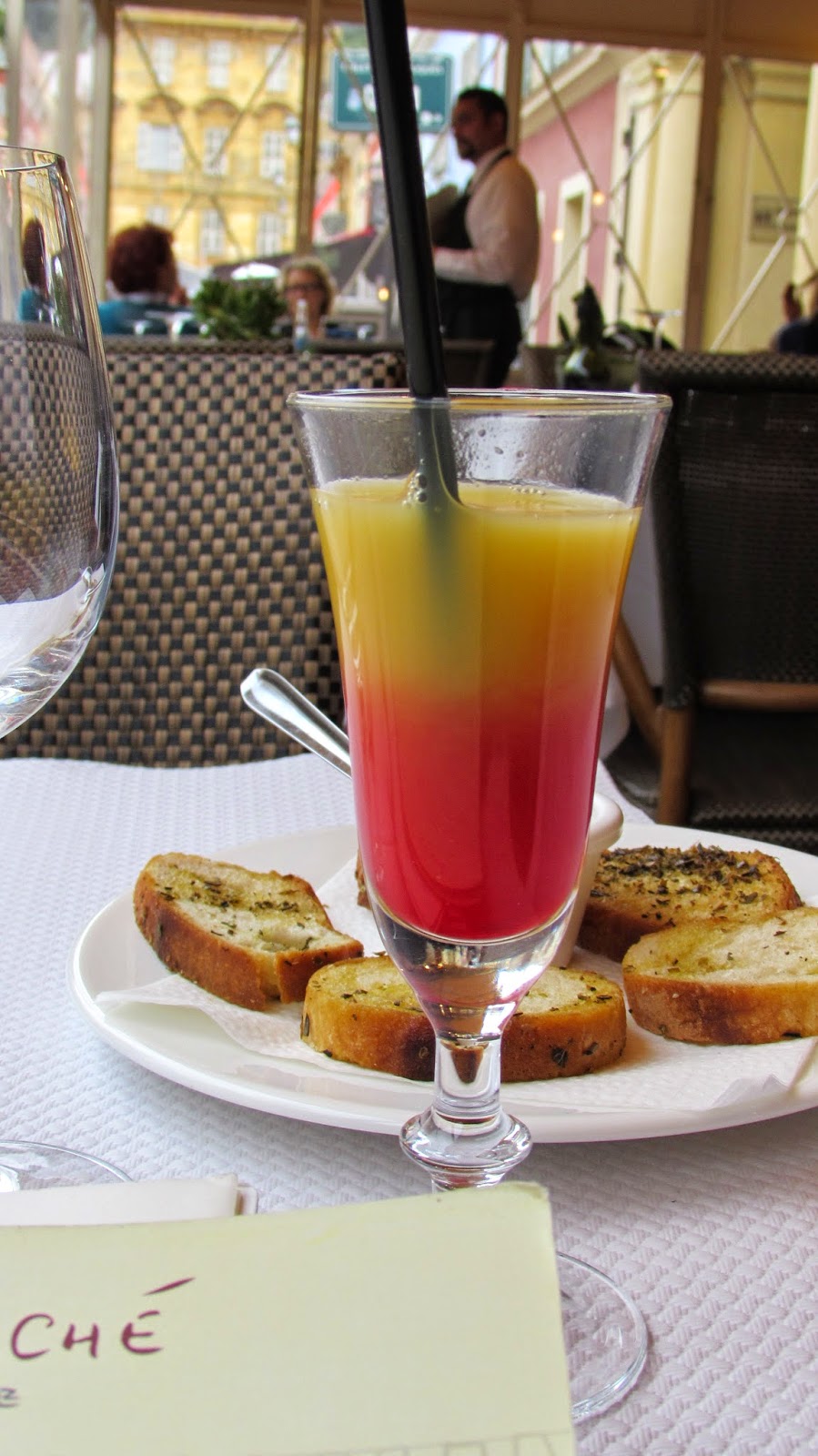 I drank this one, before the meal. Not the drink after the meal.

The waiter sat a honeymooning couple beside me, because they were also from the US, and I gave the limoncello to them. The waiter was keeping the patrons segregated by nationality. I ate risotto, which was very good. I'm not sure I had ever had risotto before this.

The waiter gave me directions to the church and square he thought I meant, and he was right. I had been circling around it all morning. It was the Reparata Cathedral, also called the Nice Cathedral, in Rossetti square. 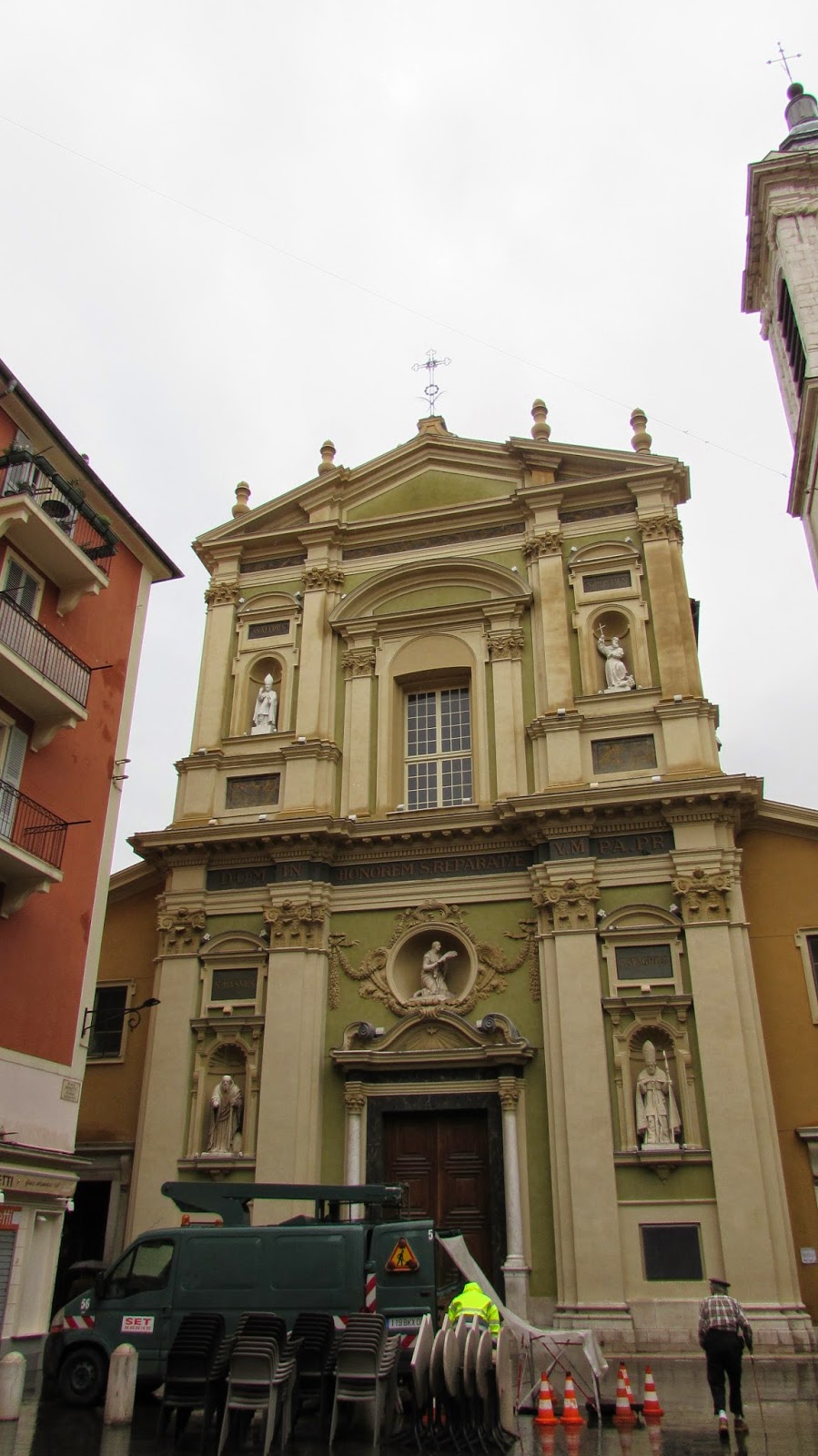 Just my luck that they were doing city maintenance in front of it when I was there.

I also figured out that on the back of the map I had there was a larger map of the old city, but it still didn't help. I then went to the Colline du Chateau (castle hill) and walked up hundreds of steps to find the old cemetery. This was in the oldest part of old Nice. 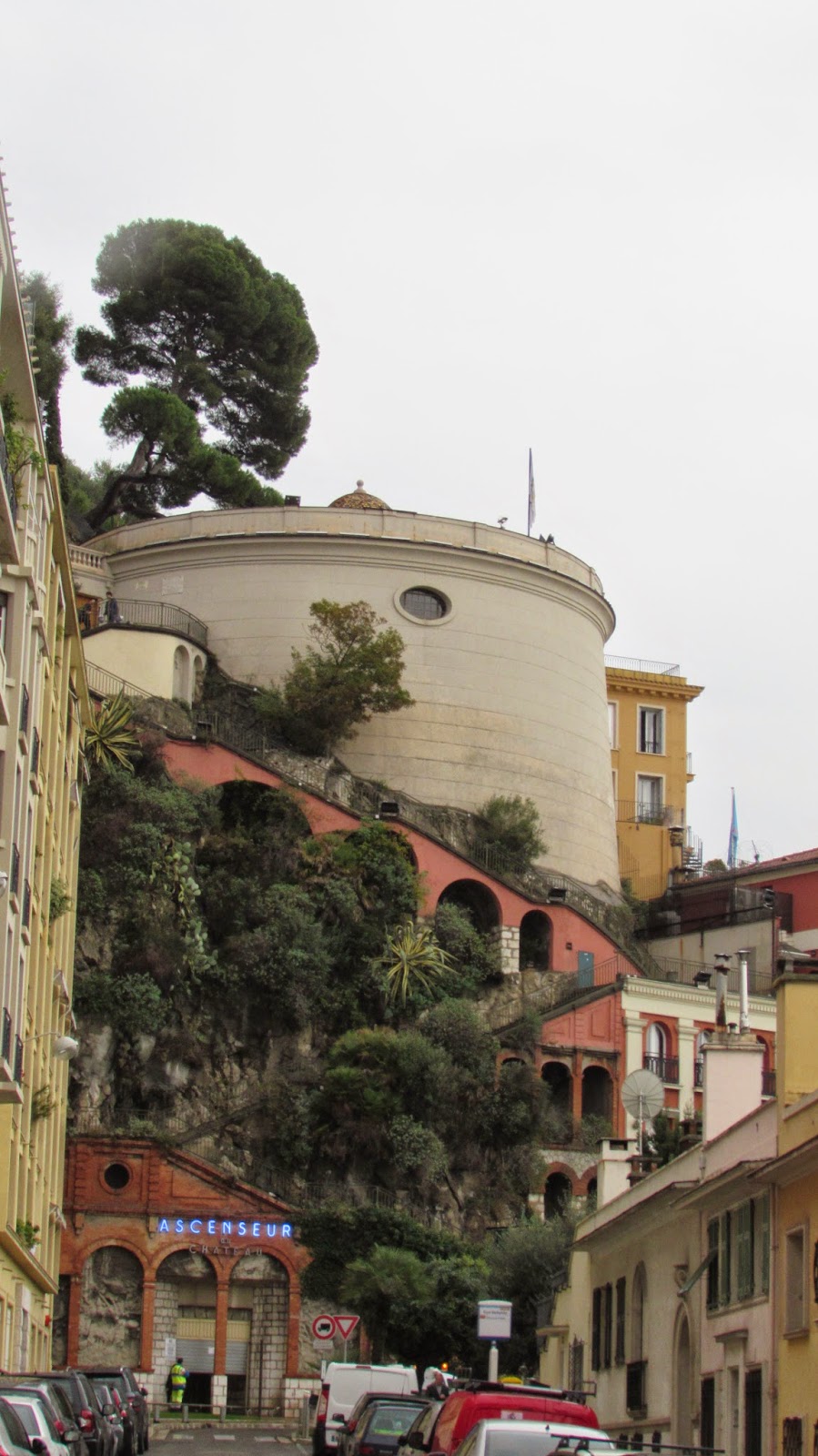 And I got lost--because that's what I do. And I just kept going up and down stairs. 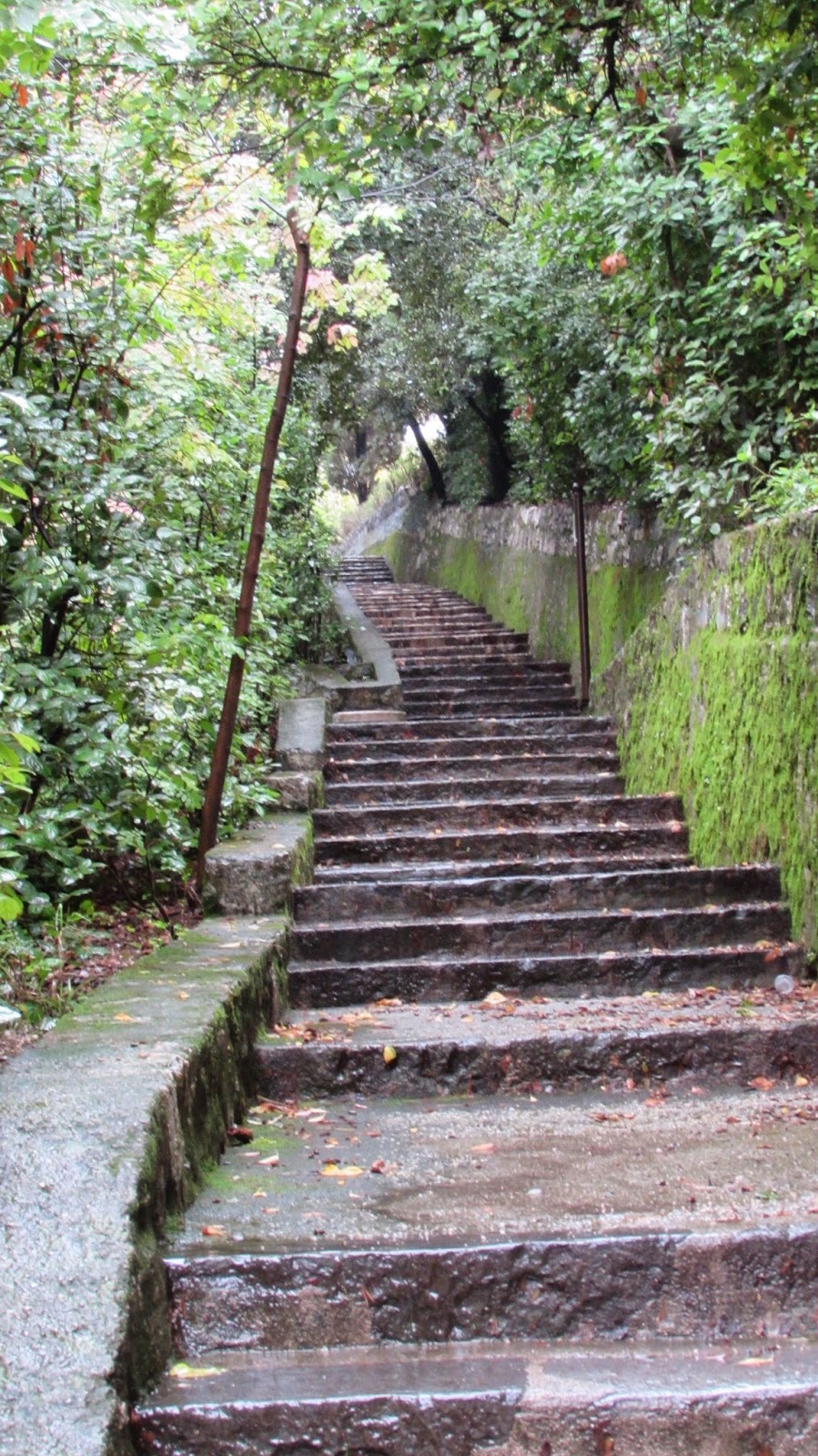 Finally I asked a city worker where the cemetery was, and I was, once again, basically around a corner from it. 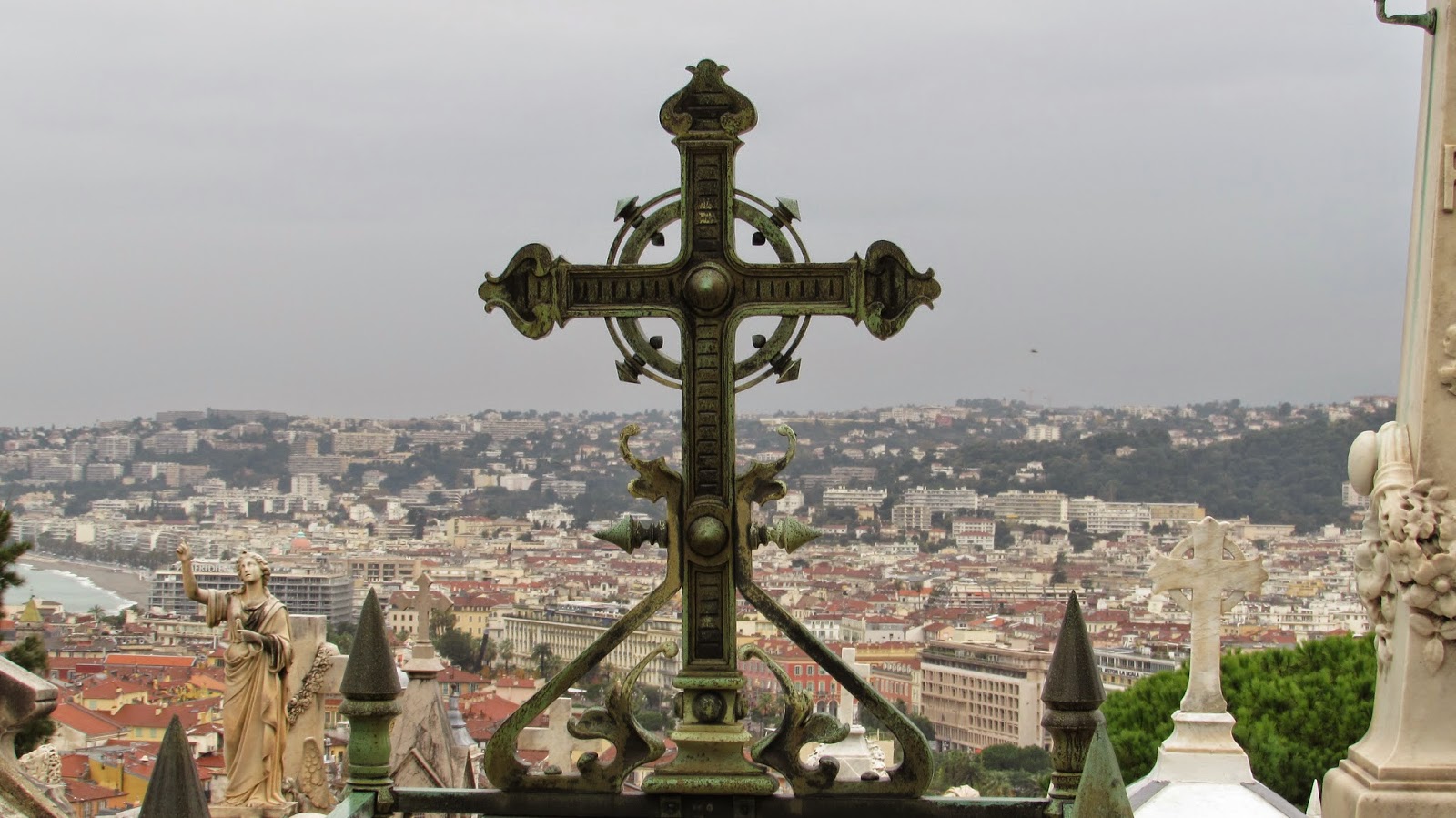 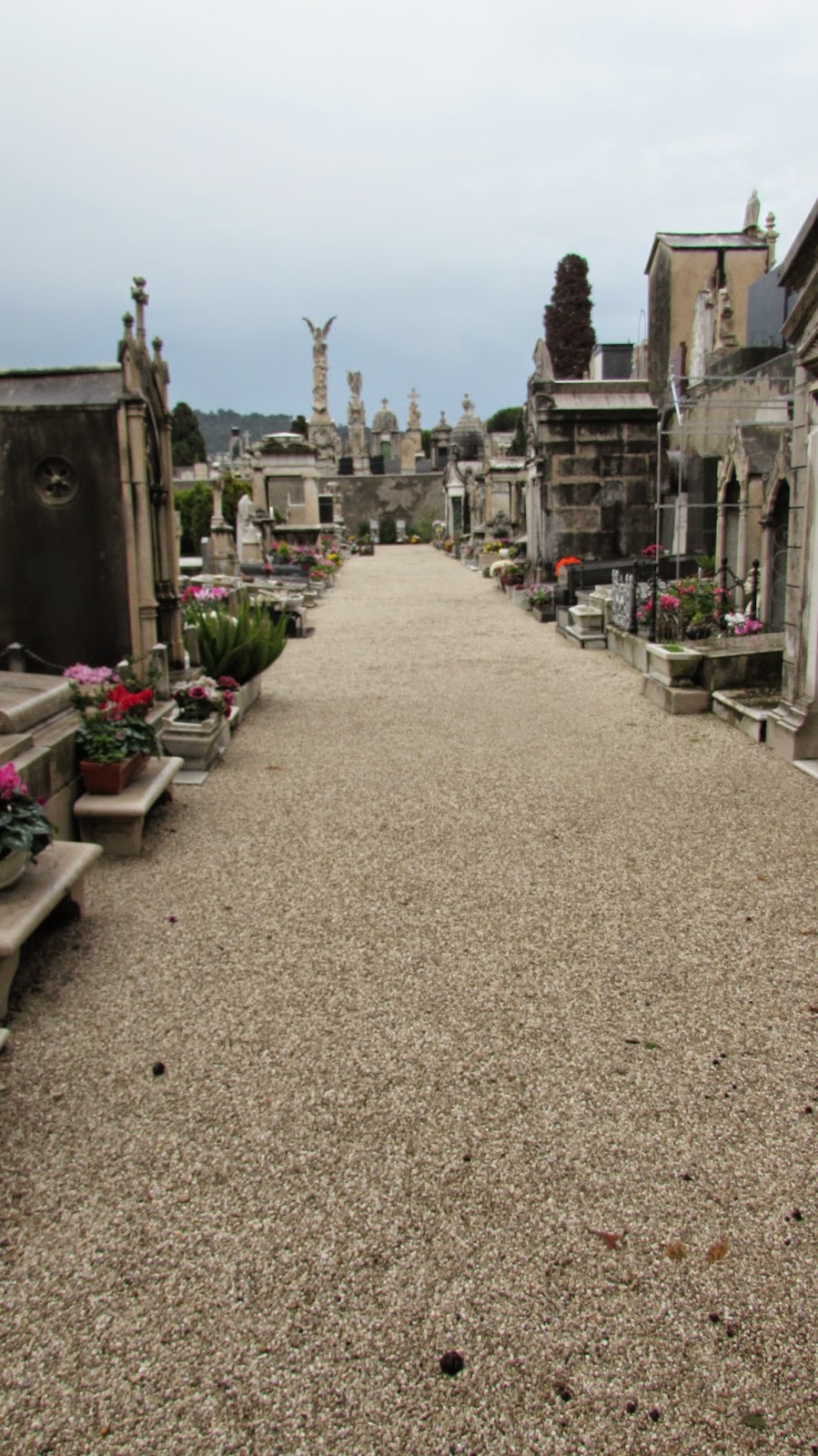 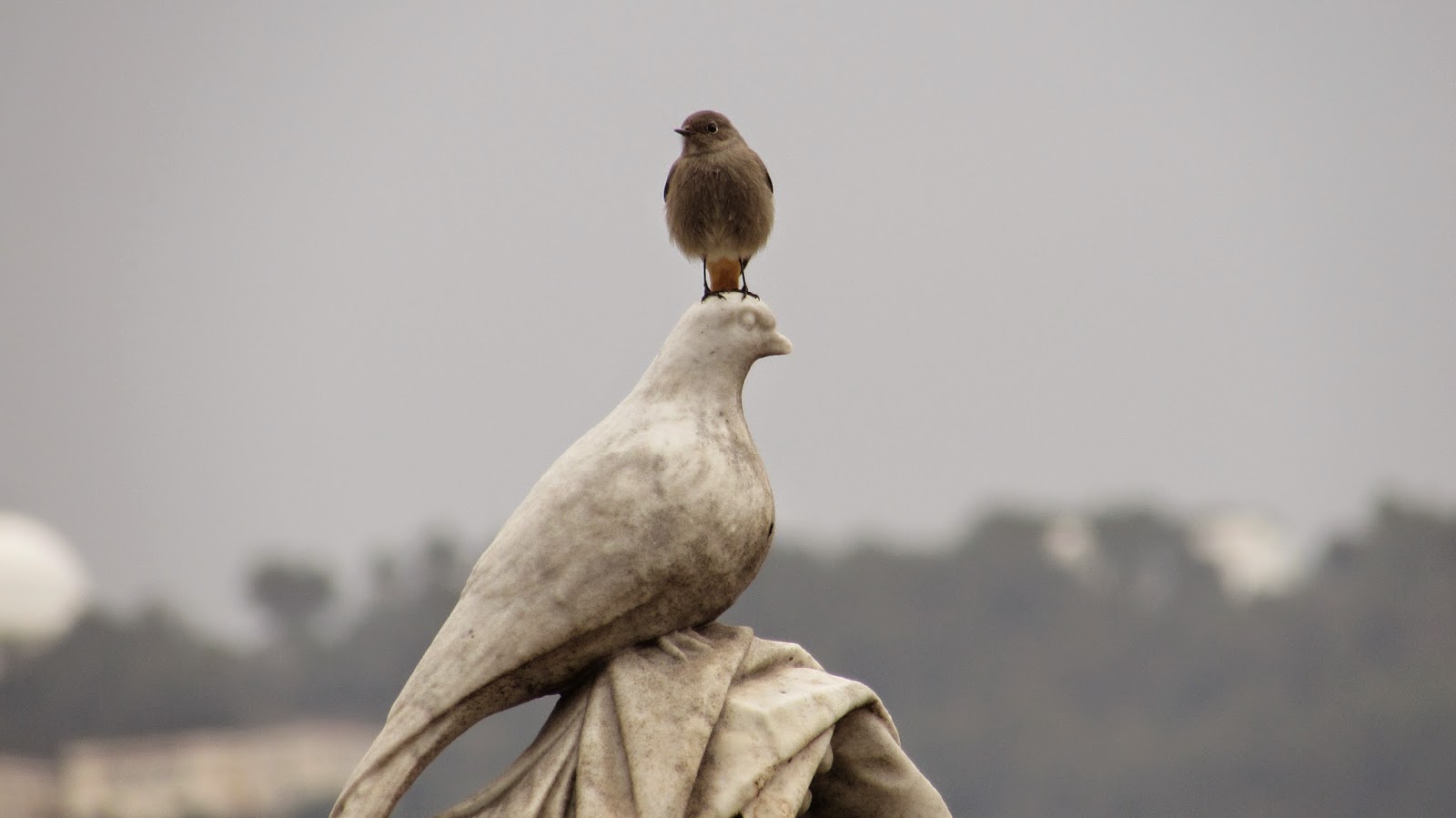 There were some spectacular views of the city from the top of the mountain I climbed, but most people probably visit it by car. Once I got up there I noticed there was a road right outside the cemetery. 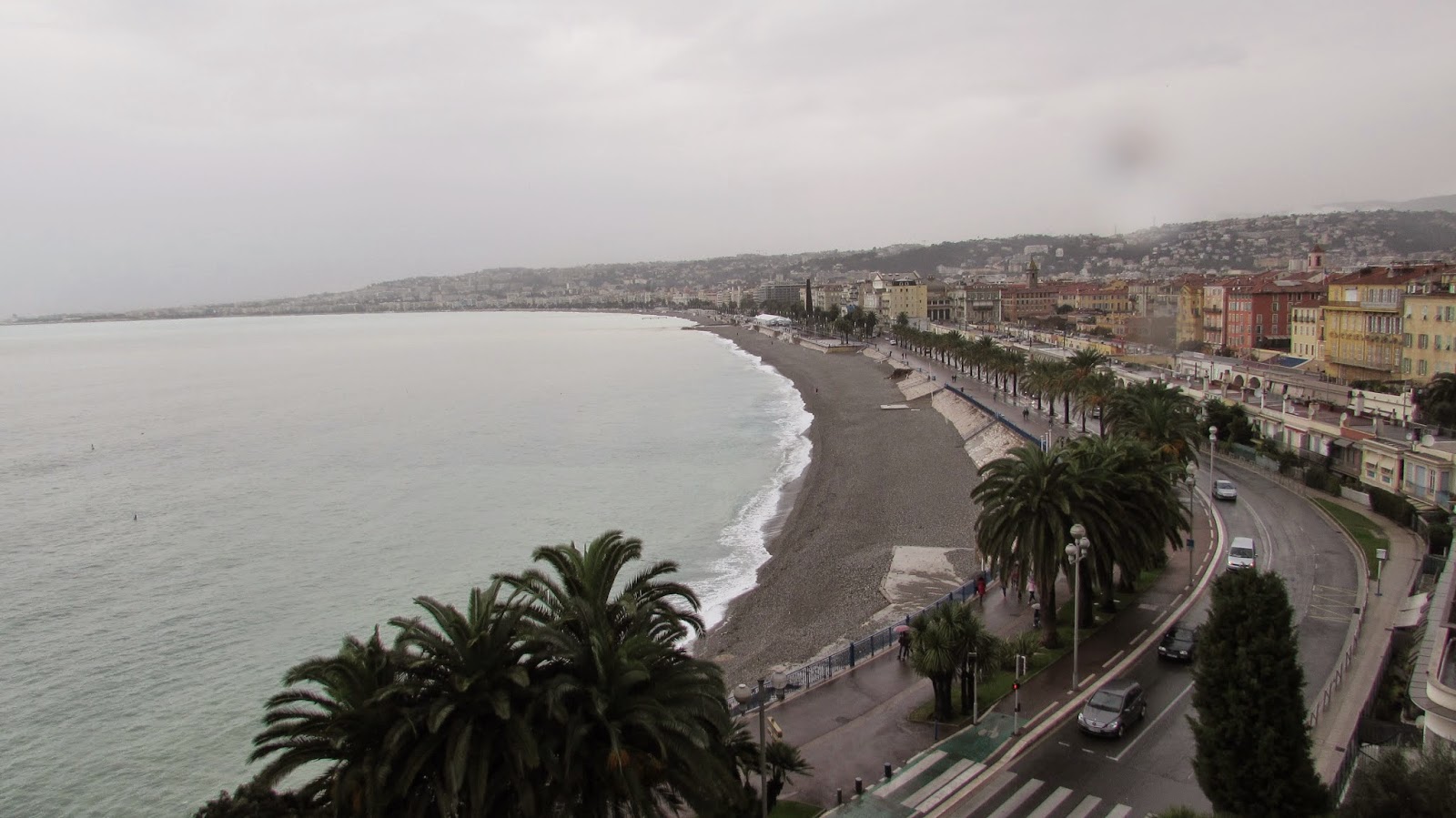 I worked my way down on the other side of the mountain, which came out in the port. Then I walked partially on the Promenade des Anglais and partially on the shore, back toward my hotel. The beach in Nice is privately rented and divided and you have to pay 20 Euros to go onto the beach, but since it was the off season, all of the beaches were open.

Up on the promenade, all I could think about was getting to my room and resting a bit. I crossed the street to head back toward the hotel...which took me right past a casino. I had to stop in a try my luck. Before you know it I had lost 15€. That was my allotment for that, so I left the casino. And being poorer, I decided I should find a bank and get more money. I wandered into the pedestrian area of the city, away from the shore, and asked a waiter for a bank. He pointed me in the right direction and I was flush again.

Back to the room for a little rest, then, sore from my day, I knew I only wanted to walk a very short distance to eat. I went for Italian and the restaurant owner, Mario, gave me a free aperitif, du sucre - non-alcoholic and sweet. And immediately I had my very own Italian stalker. Mario tried to get my address and phone number, but I didn't give in. He wrote his phone number on the back of my bill and insists he will come to America as soon as I call him. He had better not be checking plane fares.

I went back to the room to shower and recharge for my next day. 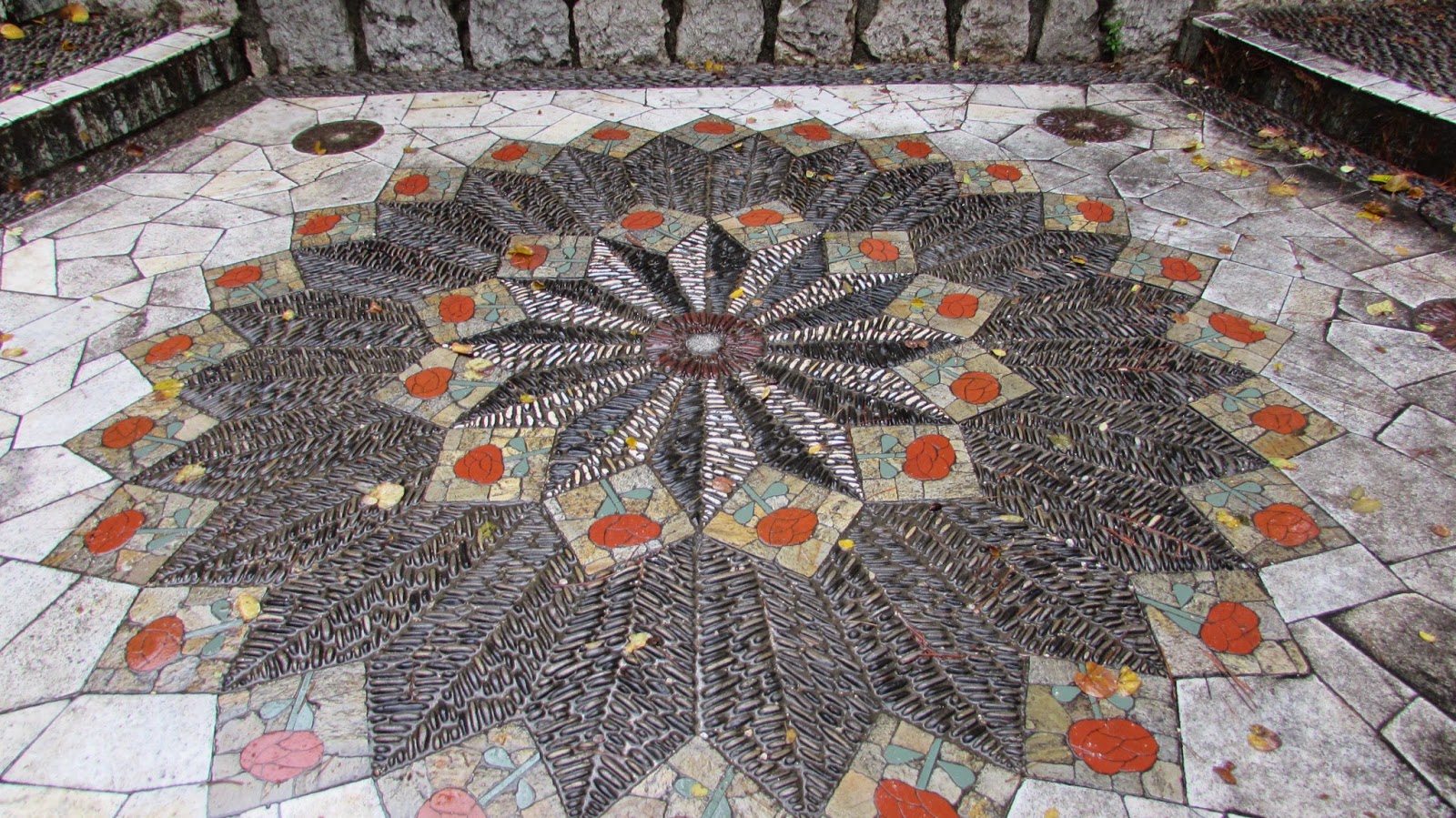 One of the beautiful pebble mosaics all over the city. I have to learn how to do this so I can make them in my yard.

Posted by Camille Sharon at 7:39 PM