St. Antonin Noble Val - or Why I Went to Europe in the First Place

November 10
I did break down and get a cab to the bus station for my 4 AM departure, even though it was very close, because I didn't want to be walking the steep streets in the dark with my suitcase in -5 degree weather at such an early hour. I still didn't know what that temperature meant, but I knew it was cold. I knew from taking the bus to Andorra that it wouldn't be very full, seatbelts were not worn by anyone other than me, and if I sat in a seat with other seats beside it I could stretch out and nap. The buses were small, with two seats, an aisle, then one seat. I was in the habit of taking the single seats each time I got on a bus, but I took a two seat group this time.

It was still difficult to sleep on the bus.

I arrived in Toulouse around 8:30 AM at Gare Matabiau and headed for the Enterprise car rental desk. I had reserved an automatic car, but there was a lot of confusion about if I had paid in advance or not. I know I was charged for the extra insurance I bought, but I couldn't remember if I was charged for the actual car. They put an 850€ deposit on my credit card and gave me the car. With no instructions on how to use it or a map or anything. Just - there it is. Bye! 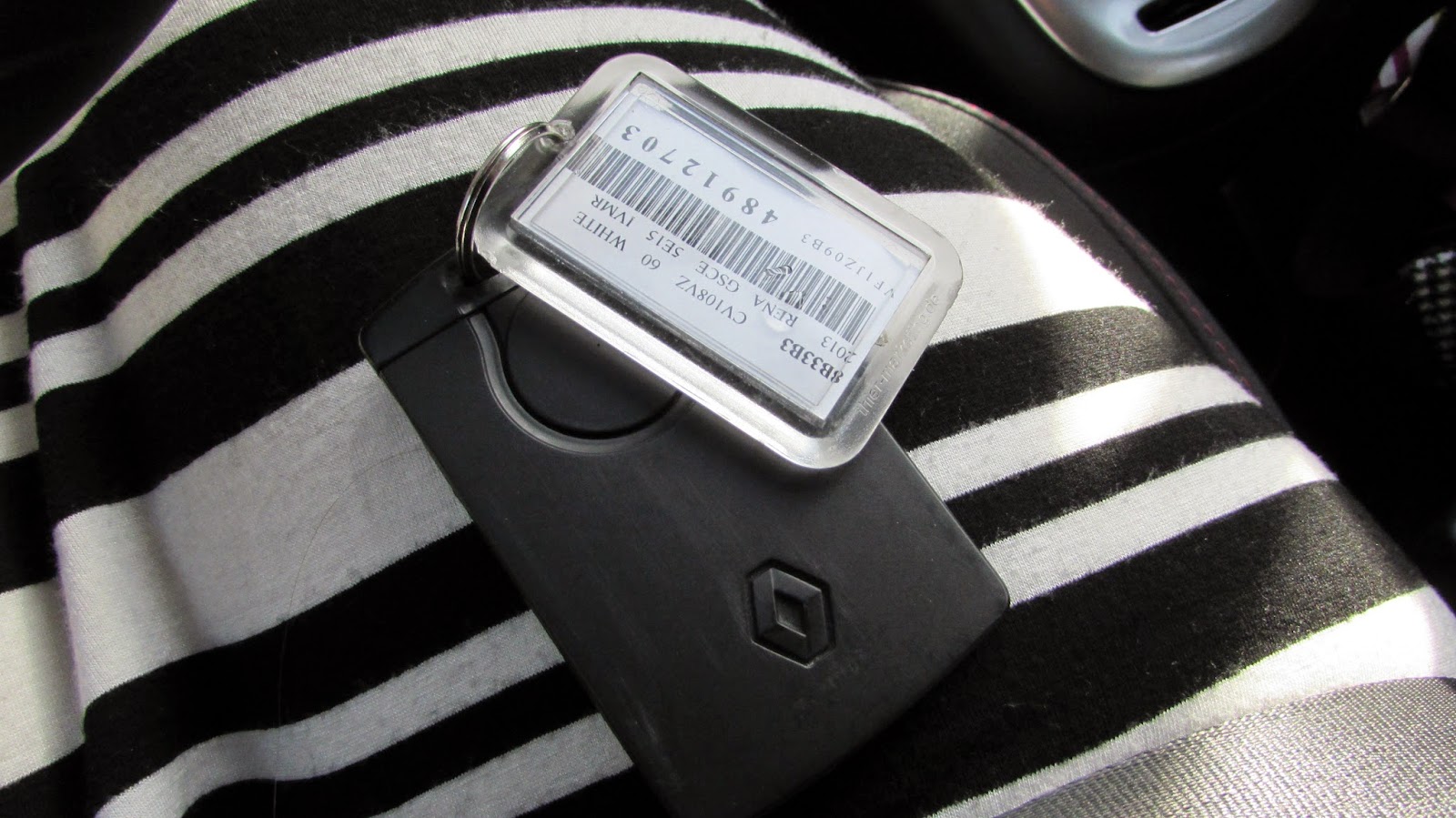 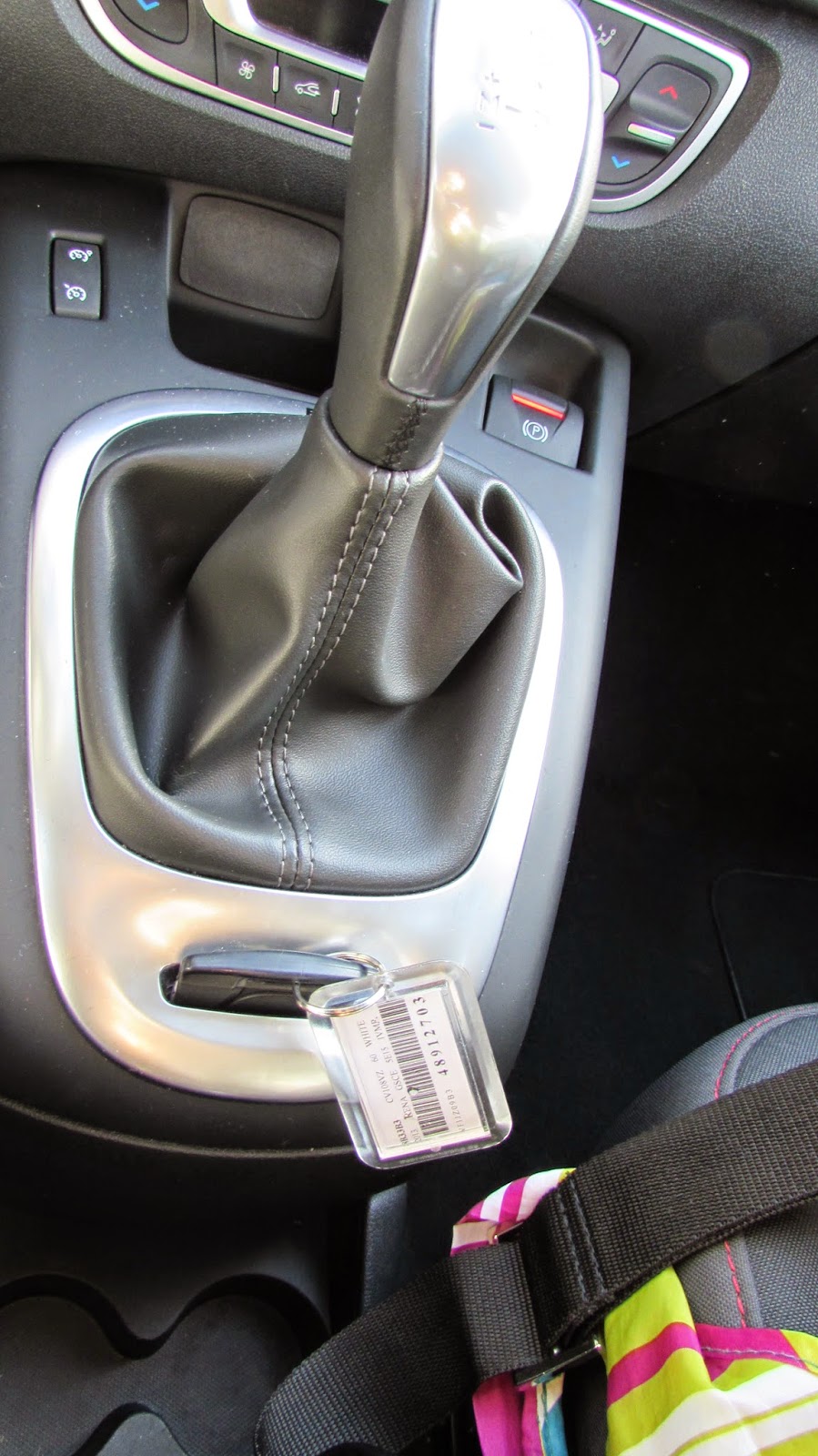 The key in its holder.

I drove around the streets of Toulouse a little bit and finally figured out that the car had GPS. I spent another 30 minutes pulled over to the side of the road trying to program my destination in the GPS. I finally was able to get the longitude and latitude coordinates of the B&B programmed in and I was off.

I also encountered some unexpected toll roads before leaving the highway and going down narrow winding roads through vineyards. None of the signs had the name of where I was going on them, but I just followed the GPS. I followed it all the way to a dead end at a farmhouse - which was not my B&B. An old French man, looking very typically French, came out with a map and helped me figure out the GPS had lied to me and I was still 130 km from where I wanted to be - the E part of the coordinates appeared to be completely wrong. I was far enough N, but in the wrong E.

When I had tried to put the city name in, Saint Antonin, the GPS didn't recognize it - because there are 100s of villages in France with that name. Thanks to the old man with the map, I knew I was looking for Saint Antonin Noble Val (from the movie The Hundred Foot Journey) and the GPS understood that and took me to the right place. By then I was starving, so I stopped at a McDonalds for my first official meal in France. Just where everyone plans on eating when they are in France. The iced tea at McDonalds did have ice in it, unlike the other iced teas I had encountered so far on my trip, but the flavor had very little to do with tea. 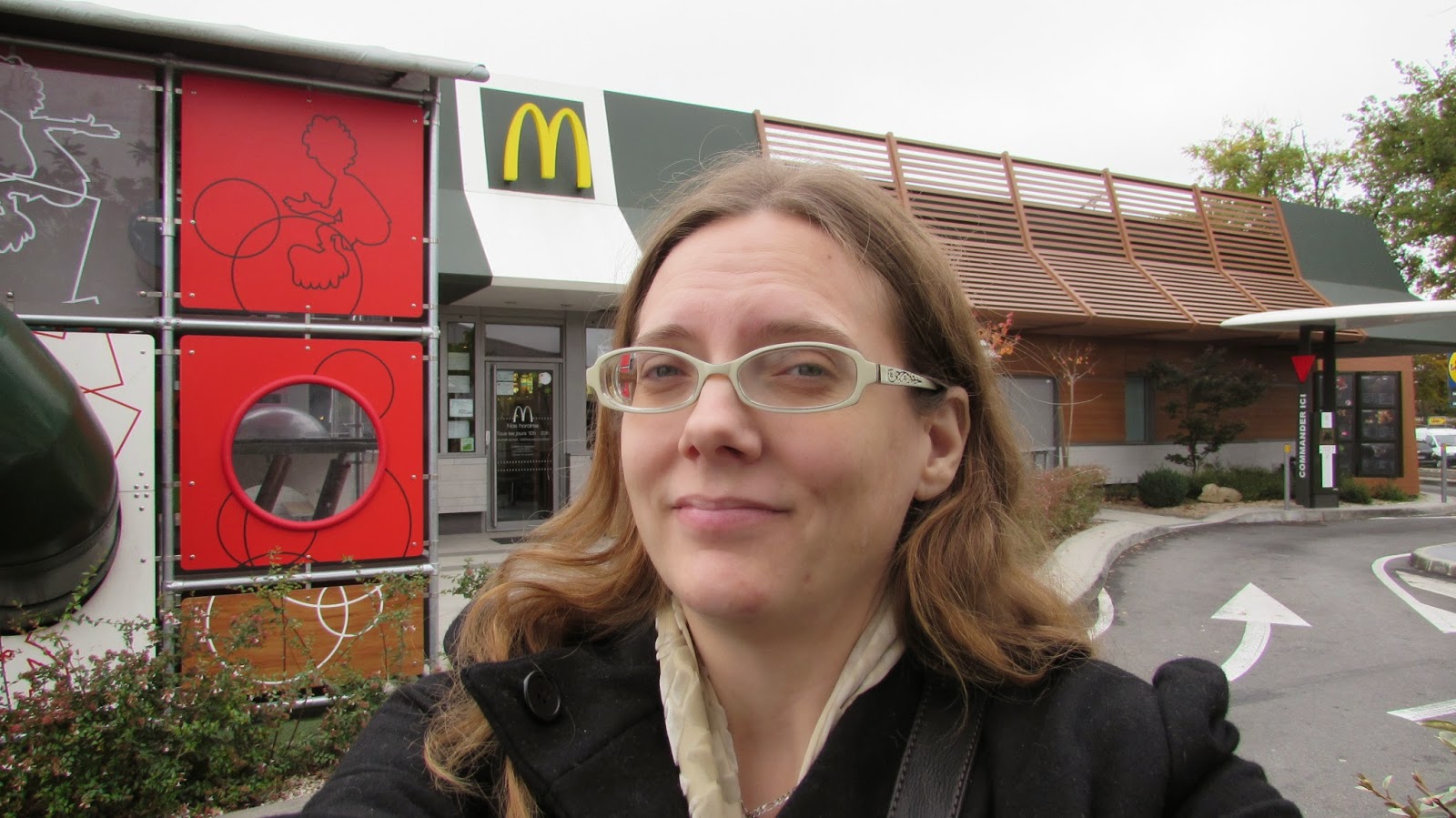 I drove another hour or so and found the road my B&B was on, and took it until it terminated at someone's farmhouse - not my B&B. As luck would have it, the owners of the B&B were just walking down the road near the church and gave me directions to their house, which I immediately misunderstood. I went down the road to a house with a wooden gate and disturbed some old French sisters who all live together and keep to themselves. Two of them came out to talk to me, but they refused to acknowledge they had a neighbor like I described, even though I had met that neighbor only seconds before and less than three houses away.

I turned around and went back in the direction of the church, thinking worst case I would meet the B&B owners again. There was another wooden gate just behind the church with a small sign with the name of the B&B, so I finally found the right place. 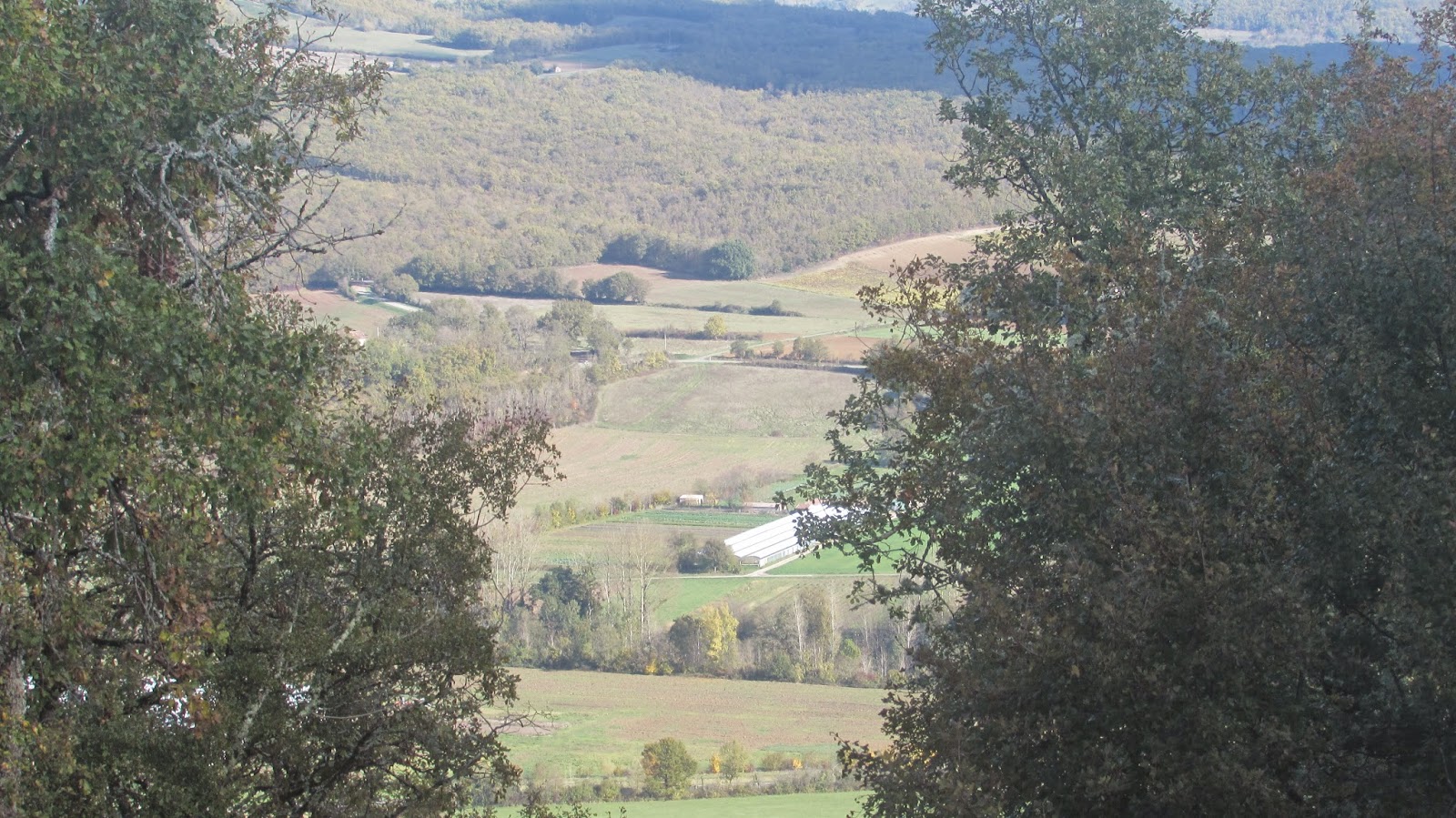 St. Antonin Noble Val as seen from my B&B.

Despite arriving hours before the check-in time, the owners let me into my room. I cleaned up a little and went down to the town. Which was closed. Apparently both Sunday and Monday are non-working days in France. Oh, well. I was able to walk around the town, pretty much alone, and take some pictures. I went down to the river and sat for a bit, then returned to the B&B. After nearly 4 hours of being lost driving and 3 hours on a bus, I took a shower and had a nap. 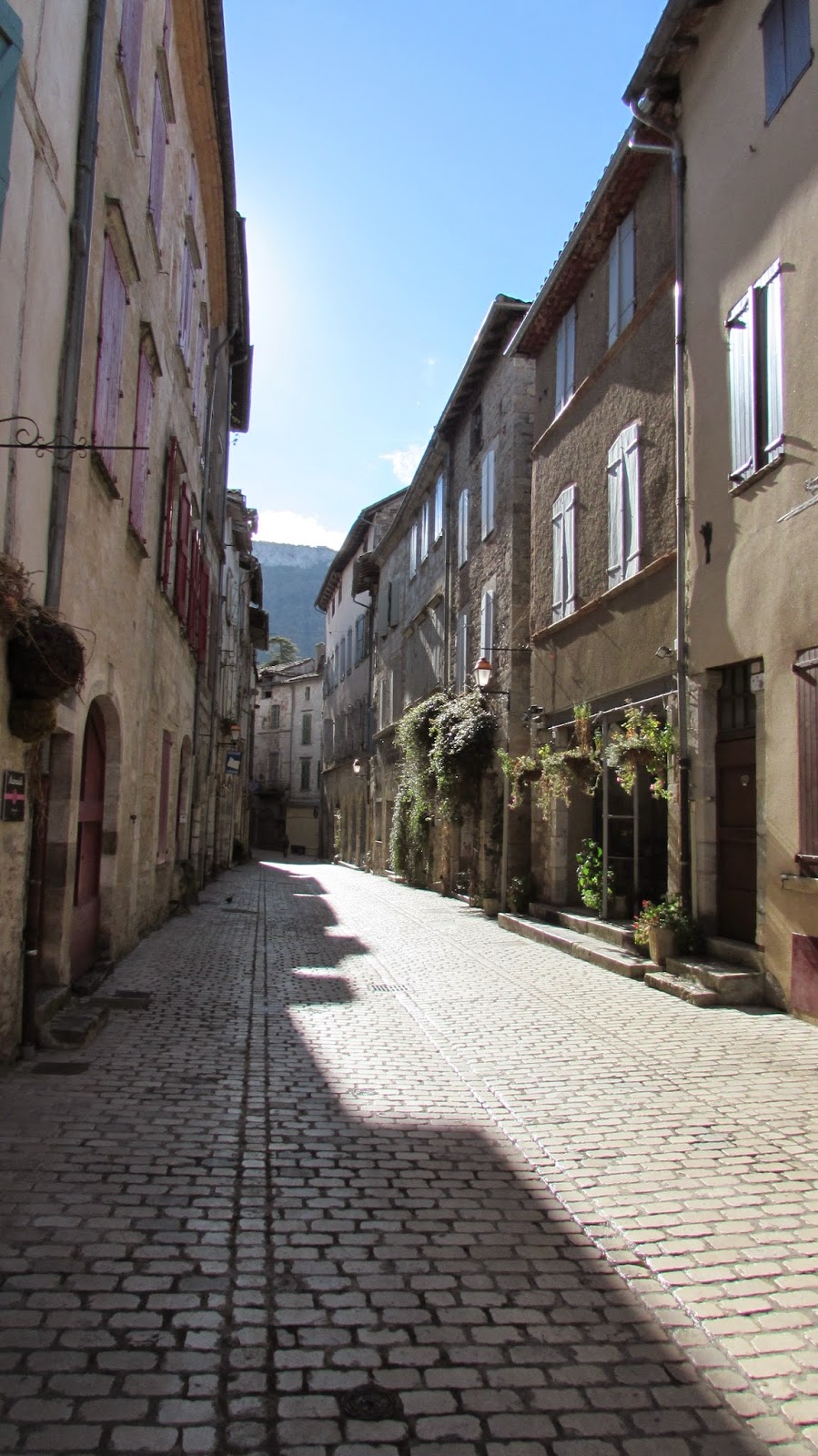 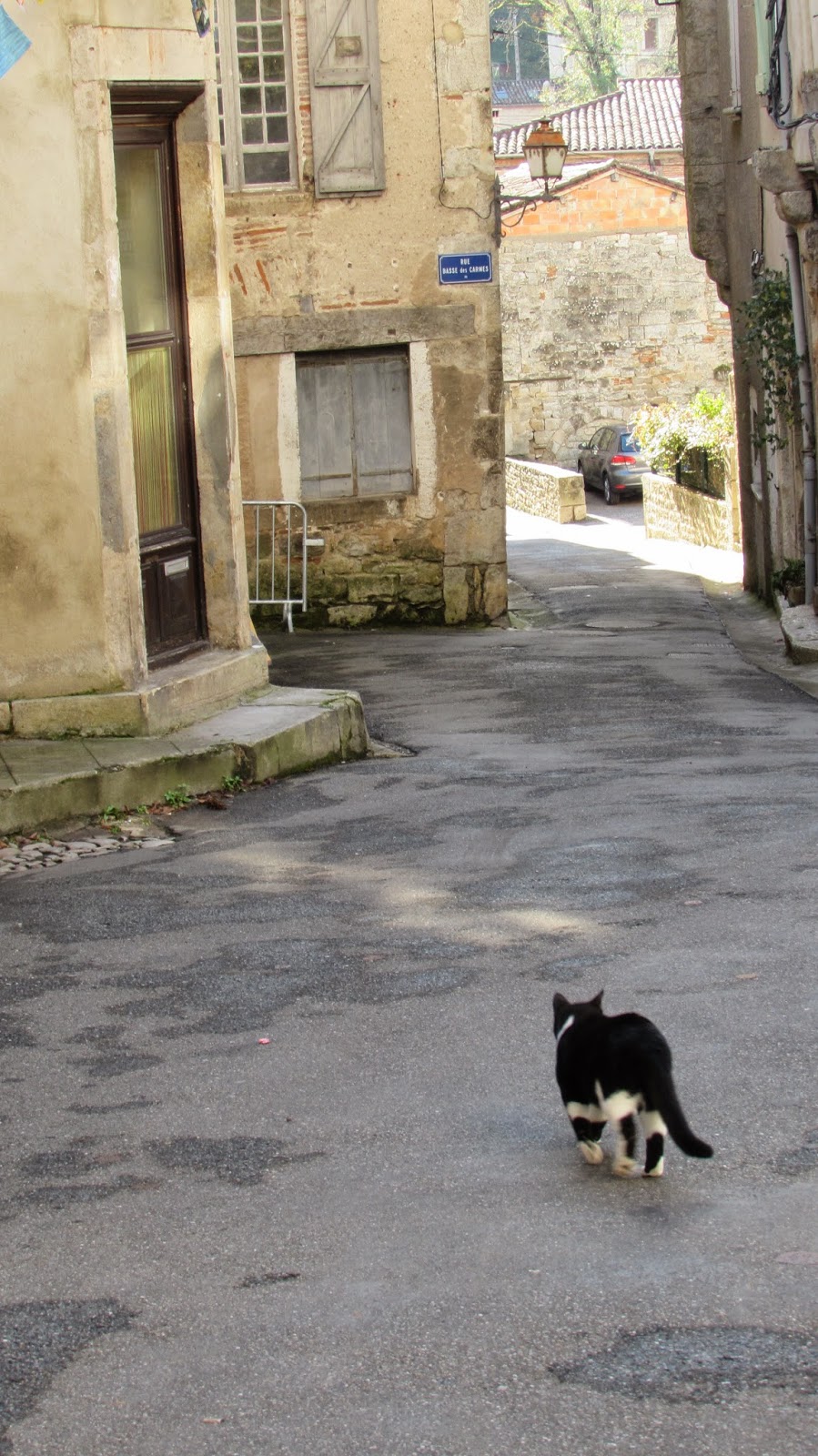 The deserted streets of the city. 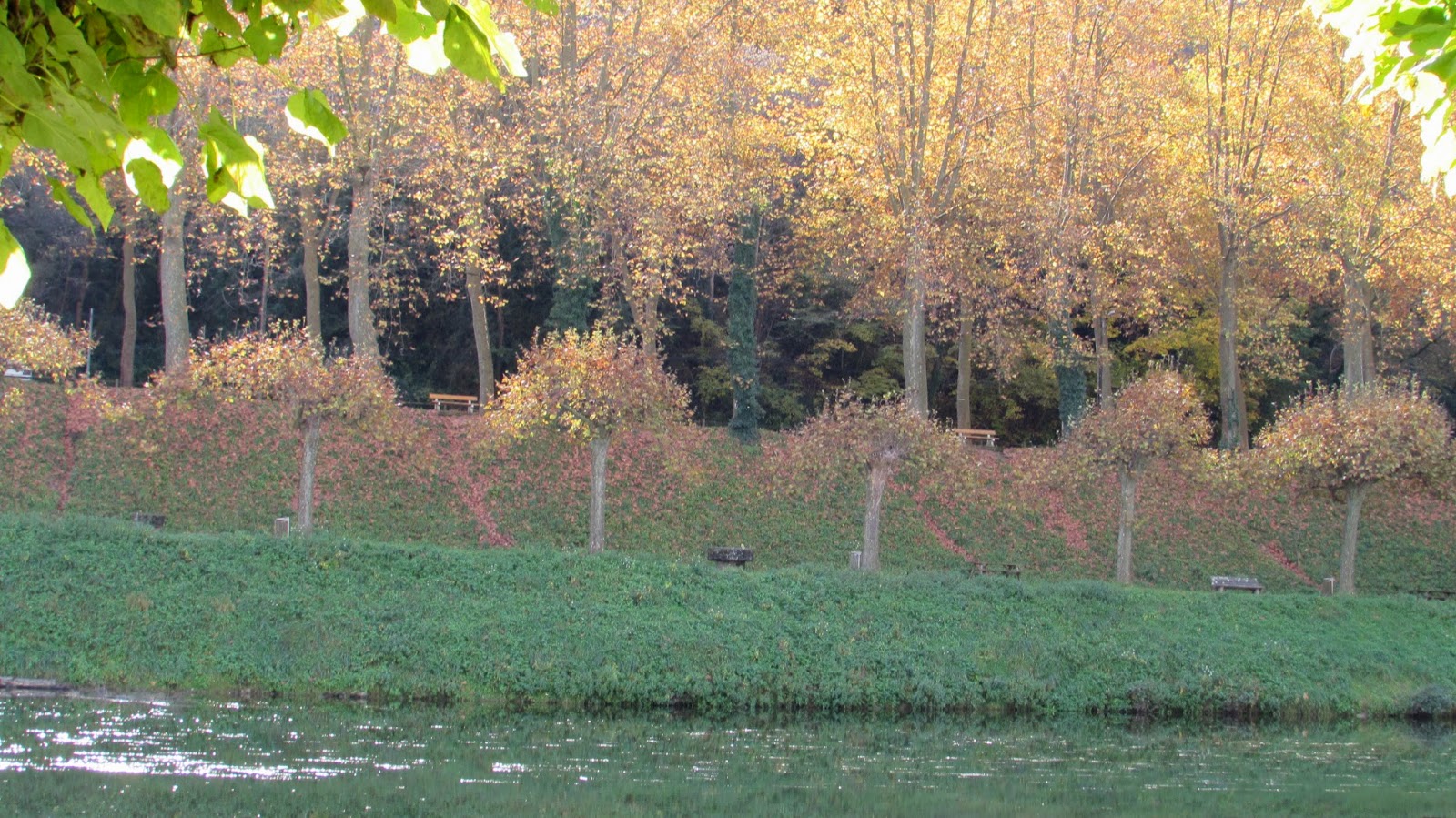 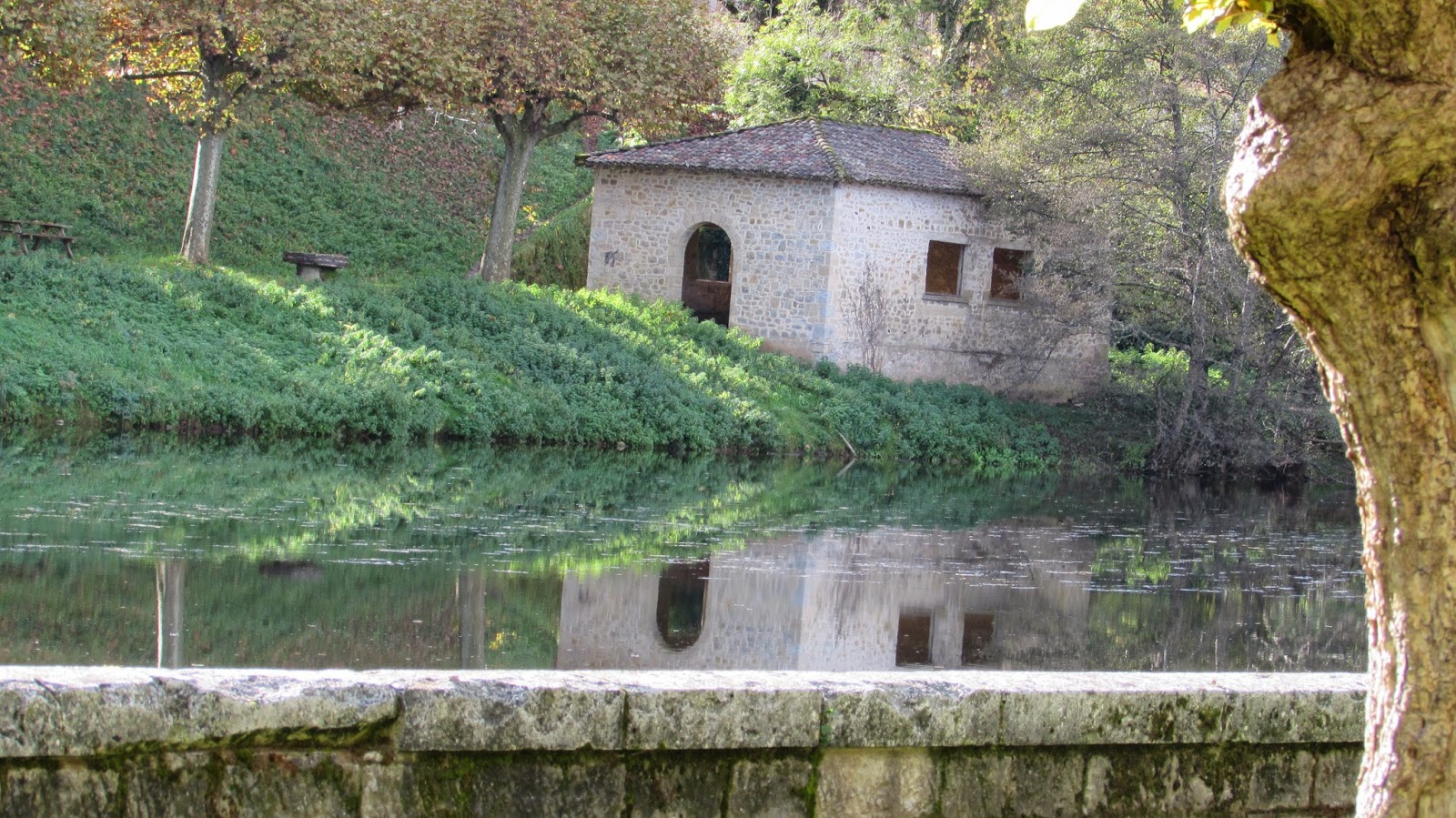 The view of the river.


The owners of the B&B knew it would be hard to find something to eat in the area, so they offered to cook me dinner, for a fee. I told them I didn't eat meat, so they made a vegetarian dinner. It started with lovely salad, which I thought was the whole meal, but it wasn't. Then there was an omelet with the mushrooms from the region called cèpes (porcini mushrooms to most of us in the USA). Fried potatoes on the side. And there was a fresh apple pie for desert, with chantilly (whipped cream). It was a lot of food, but very good. After dinner we sat and had chamomile tea by the fire.

The female owner of the B&B works in translation and does work for one of the companies in LA where a lot of my colleagues have worked - small world! She also likes to make jewelry. 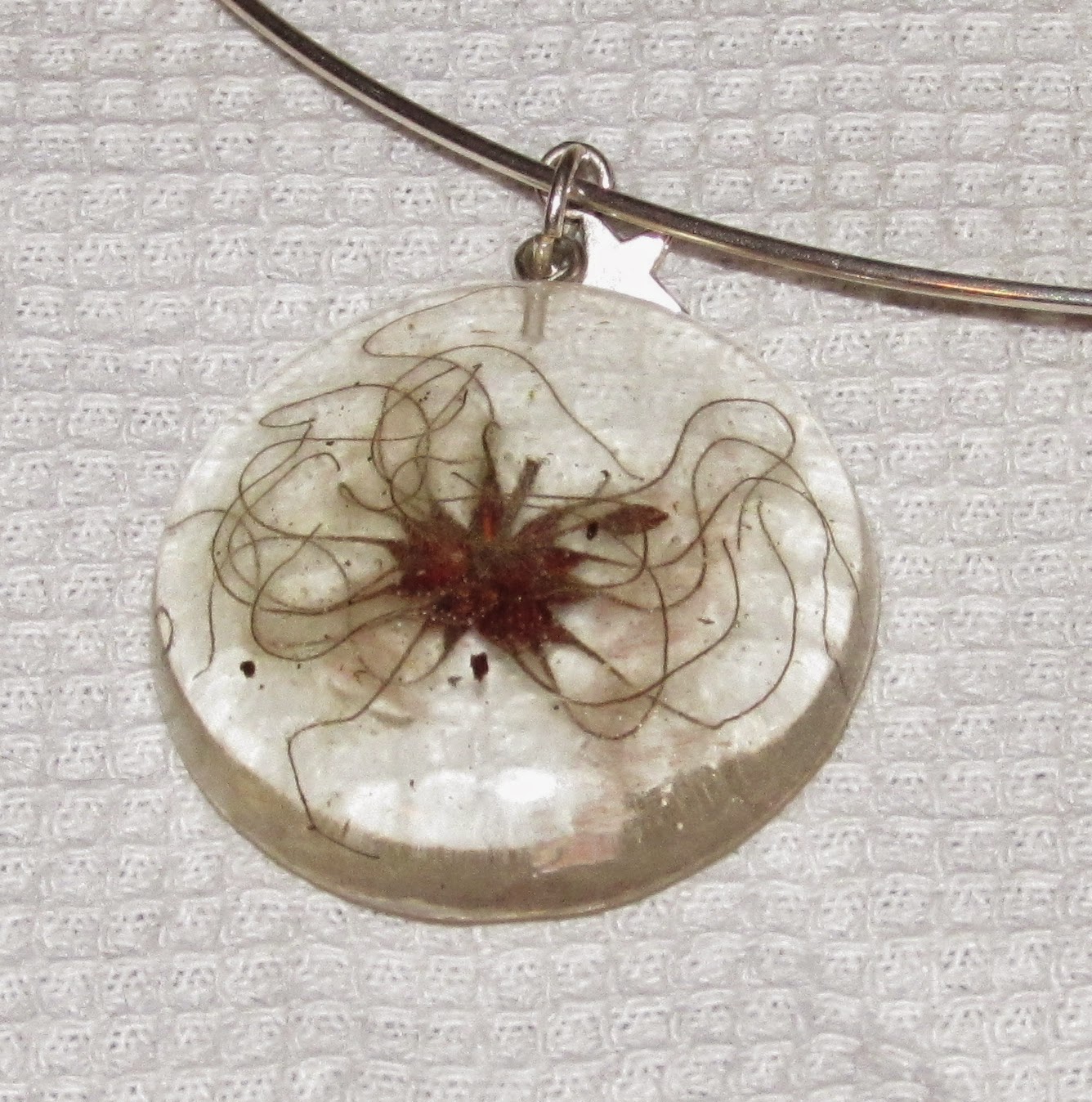 A pendant featuring seeds from the area.

The only other guests in the B&B, since it is the down season, were a couple coming from their home in Portugal heading to their other home in England. The man was Welsh and his wife Belgian. They spoke French fluently, but were kind enough to speak English when I was around. They were traveling with two dogs.

There were two cats living at the B&B - Diablito and Oscar. I didn't meet Oscar, but Diablito spent the night on my bed in my room, knowing I missed my kitties. 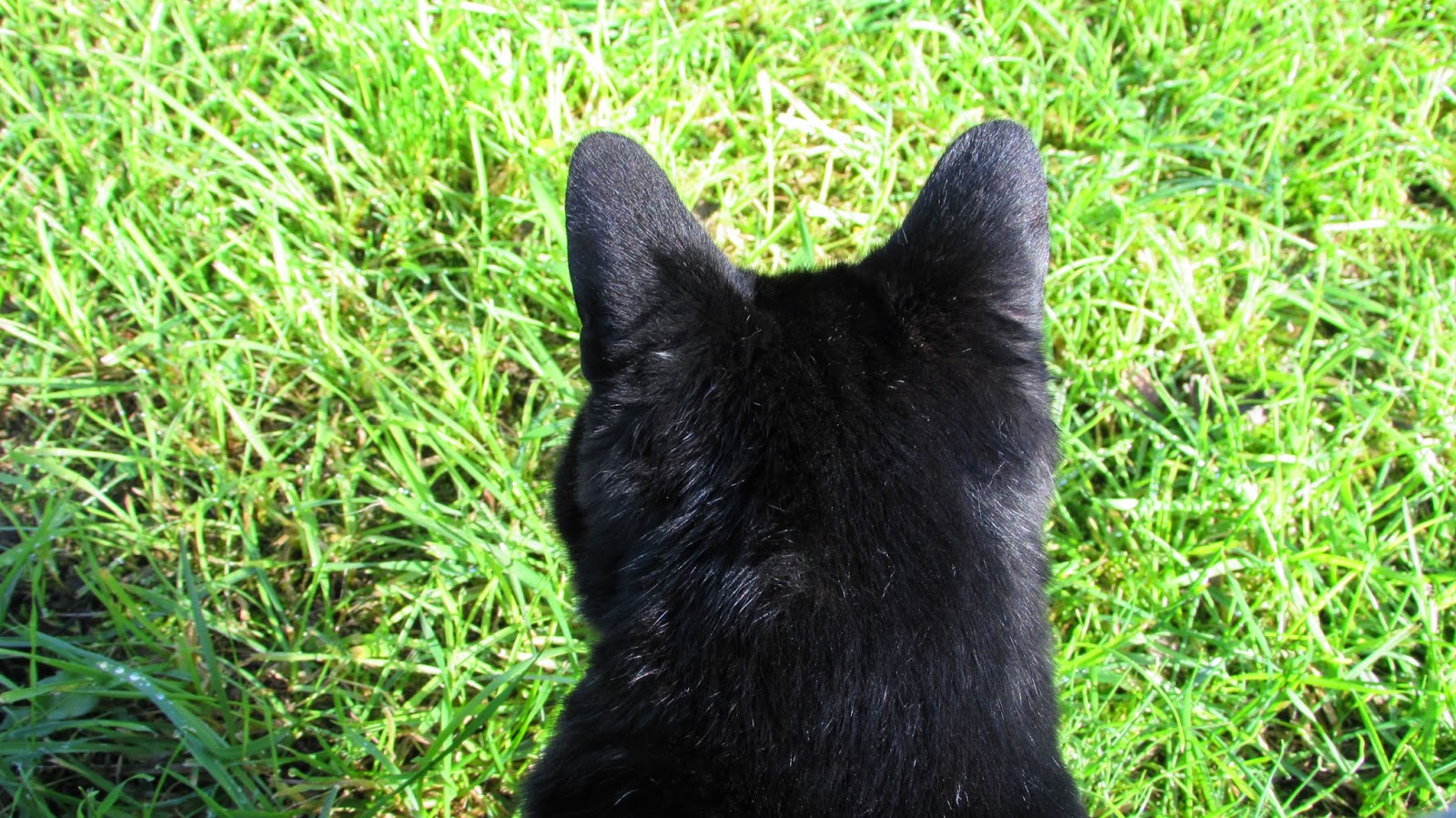 Posted by Camille Sharon at 6:59 PM