If you have followed my blogging for years, then you know I occasionally will have my own awards season. Usually I do this in December or January, but the pandemic has rendered time meaningless. With the news today (March 5, 2022) that Taskmaster is getting its own streaming services, I decided it was time to hand out my awards again. Although looking back over my current blog - the one you are reading - it looks like I haven’t found anything excellent since starting this blog.

The Camille Awards for Excellence have no set categories and no requirements as to how many there are or, apparently, when they are handed out. The only thing that is required is that something be excellent. I am the arbiter of excellence. Past winners include Jim Parsons and Richard Ayoade. Maybe the episodes of Doctor Who with David Tennant and Catherine Tate? If I didn’t bother to give them an award at the time, I’m giving them one now, retroactively.

The pandemic changed a lot of things, and in the early days it shut down new TV shows and movies. This proved to be an excellent opportunity for shows from other countries to make their way to the United States. As you may have guessed, based on my previously given awards, I am a little bit of an Anglophile. It should come as no surprise that my current batch of excellence awards are all for British panel shows.

The first award goes to Taskmaster. Thanks to the creator and star, Alex Horne, apparently being smart enough to own rights to the show or to convince whoever does own them that YouTube was a great distributor, he was able to start a Taskmaster YouTube channel. The first 8 series are now available there. They were originally spaced out during 2020, with one new episode each week and then there was a tragic miscalculation. Series 8 and 9 were commissioned to the WB and taken off of the air after episode one of series 8. The rest of the series is now on YouTube, but for a while you could only watch it on CW Seed (which I don’t think exists now). Series 9 is in limbo, but there was an announcement on March 5, 2022 that it will be available on the new Taskmaster streamer in April 2022. I’m looking forward to that. I’ve watched Series 1-8 at least twice, some episodes more than that, and don’t doubt I’ll watch them all again.

The second award goes to The Unbelievable Truth. You can get it in the US on Audible, or wait for illegal uploads to YouTube. It is a radio production, so the YouTube version just has a static picture that goes with it. Kids-- A radio show is just like a podcast, but with regularly scheduled times to listen to it on the radio. I had heard a lot about TUT from guests on QI (another show which I might have given an award to, and if not, it gets one now, blah, blah, blah), but had never actually heard it or even been interested in seeking it out. I’m giving Series 21, Episode 5 a secondary award for being one of the funniest things I have ever had the pleasure of listening to. Go listen to it. You’re welcome.

And finally, I want give another retroactive award, assuming I haven’t actually given it one before, to Would I Lie to You. Now available in the US through BritBox, although I was first introduced to it via illegal YouTube uploads. It, and QI, are the main reasons I have a BritBox subscription. Now if they would only add new episodes of Alan Davies: As Yet Untitled, that would be great.

Anyway, the world is currently a terrible place and Russia might destroy us all. So until that happens, these shows help keep my spirits up. If the winners want an actual prize, all they have to do is ask. I’ll work something up. I suspect they aren’t bothered, though.

Let me add a picture now, because the blog looks better in my list of blogs if it has a picture. This has nothing to do with the awards. A sunflower from my yard and my painting of it. 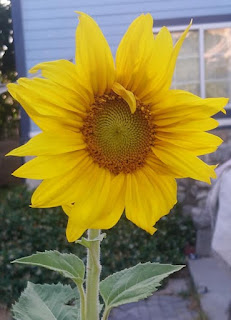 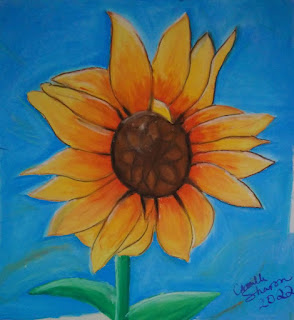 Posted by Camille Sharon at 7:58 PM