December Book Report and Some Thoughts on the Year: Me Talk Pretty One Day by David Sedaris

The collection of essays, Me Talk Pretty One Day by humorist David Sedaris, starts with a story of how in elementary school he was taken out of classes to attend speech therapy sessions. Rather than having his speech corrected, he worked around things by expanding his vocabulary to avoid the words with the “s” sounds he was deemed to be not good enough at. What follows are essays woven around the loose theme of talking/speech, presented in (from what I remember) chronological order, following his upbringing in North Carolina, his young adulthood in New York and his adulthood in New York and France. The tendency to choose different words as a workaround for speech problems continued into his adulthood. Rather than learn the genders of words in French, he would order things in multiples, since a “la” or “le” word transforms into a gender-neutral “les” when pluralized.

I found the book to be enjoyable, but largely forgettable. I was most interested in the stories about France, where he would give literal translations of things he tried to say in French and how the sentence structure was different and sounded juvenile in English. But the way he only presented the English end of the translations left me wanting to hear him say the thing again in French. When he talked about his first trip to France where one of the only words he knew was “bottleneck,” I longed for him to tell me the French word for “bottleneck.” Looking it up, Google Translate offers three different choices. Was he saying goulot? I’ll never know. And this is the kind of thing that really bothers me.

There were sections where I laughed, which is a pretty good endorsement, but sitting here today, I can’t tell you where those sections were or what they were about. I’ve forgotten them.

I didn’t actually read this book, I listened to it. It was read by the author. His voice, if you haven’t heard it, is similar to Droopy Dog from the old cartoons. A little southern, a little lispy, a little depressed. It was fine, really, but it drew attention to itself. For a book called Me Talk Pretty One Day, having the voice of the reader be another character in the stories works. A friend who adores David Sedaris was a little miffed that I told her my book report wasn’t going to be an overwhelming lovefest. She adores him and would listen to him saying just about anything. Sure, I feel this way about David Mitchell (the other one) and Richard Ayoade, but I do not share the passion for David Sedaris. I guess I need an English accent along with the whine to really enjoy it.

As far as the production goes, some of the chapters in the audiobook were recorded live in front of audiences and music was added in places, as chapter bumpers and during the live readings. I found this a little jarring.

Did I love it? No. Did I hate it? No. I’m sort of indifferent. If my friend said, “This other book is so much better. Listen to that one!” I would consider it. But I’m unlikely to seek out another of his books/essay collections on my own. It was whatever. 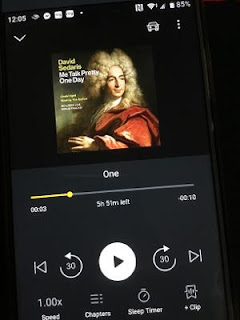 Anyway, I’ve finished my New Years Resolution of a book a month. Yay, me! What have I learned from this experience? I think I already knew it, but just reinforced that I actually hate reading, but I love books. Holding something with ideas inside, looking at the covers, smelling the pages…all great. Filling bookcases? Love it. Going to a bookstore? Love it. Finding a book with a cover drawn by Edward Gorey and adding it to my collection? Love it. But actually sitting and reading a book one of the worst things you can ask me to do. I guess that’s why it took me 10 years to edit my own novel. The idea of sitting down and having to read the thing was torture. Listening to books is better than reading them. But did I “enjoy” it? No. If I had, then the extra books I still have in my Audible library wouldn’t be sitting there, unlistened to. I actually finished this book in November and since then I’ve spent maybe another 30 minutes listening to a book. Knowing I was done and that I just had to write up the book report lifted a weight from my shoulders and no book has enticed me since then.

I’d like to blame my job for my disliking of reading. For work, I have to read a lot of screenplays. Sometimes I have to read a screenplay because of the continuity I’m writing and sometimes I’ll take work proofreading them. Reading = Work. For relaxation, I’m much more likely to put on a record. Listen to music. Practice piano or guitar. Write my own stuff. Do some crocheting or make some jewelry. Dig up weeds in the yard. Pull out my pastels and make some art. Sometimes I can put on an audiobook while I’m doing those other things, but just as often I’ll put on music. Or talk radio. Or a podcast. Or I’ll start the series of QI running at A and let it go. Background noise. A book isn’t background noise. It demands attention and mostly I don’t want to give it that attention.

Next year, my resolution will not involve books or reading.

Posted by Camille Sharon at 4:35 PM