July Book Report - Susan Calman “Cheer Up Love: Adventures in Depression with the Crab of Hate”

If you don’t know who Susan Calman is, then you must not watch a lot of British panel shows. She’s the very short Scottish comedian who started out as a lawyer. She can stand up inside of a red post box with no problem. She loves Doctor Who and names her cats after strong fictional female characters. And she seems like a happy person.

I listened to this as an audiobook, read by the author. It took me several chapters to get used to the way Susan reads. She doesn’t have the natural “acting” quality to her voice. You can definitely hear that she’s reading. But I don’t think the book could have been read or performed by anyone else.

I highly recommend Cheer Up Love to people who are depressed, looking for commiseration and maybe some tips on how to cope, and I recommend it to people aren’t depressed. Her portrayal of what it is like to actually be depressed can maybe help the non-depressed people of the world understand depression a little better. Or, if nothing else, provide them with a list of things which they should never say to a depressed person. 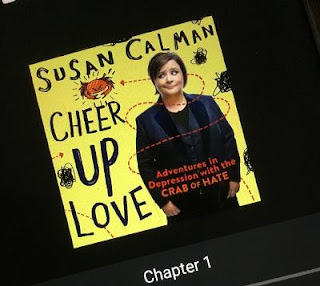