Card Games and Bags of Coins

A comedian I follow on Twitter recently asked for suggestions of board games he could play with his 6-year-old and 12-year-old. Since he lives in England, I didn’t want to offer board games, which have different names in different countries or flat-out don’t exist in some countries, so I suggested a good old-fashioned deck of cards.

I grew up in San Antonio. Just me, my parents and my sister. My relatives all lived in St. Louis or thereabouts. We would go to St. Louis every year at Christmas, sometimes one other time. Living so far from your grandparents, aunts, uncles and cousins made you all strangers. There was one big thing which changed my attitude from not wanting to spend time with these strangers to sort of looking forward to it. That was cards. 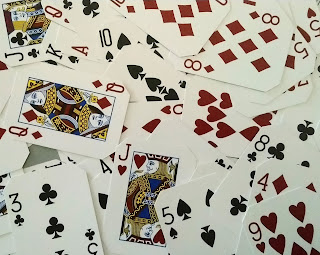 These were not innocent card games. They were played for money. It was gambling. And even at a very young age, I understood that I wanted to win money. Naturally at some point I was given my seed gambling money, but for a kid, that $1 in change was a gift, not a loan. And whatever I won was mine.

To play a game, you had to contribute a nickel to the pot. We didn’t call it a kitty, although I’d probably call it that now if I could entice anyone to play. A nickel to play a game and then a penny for each time you had to pass. When you drew a card, you could play it right away or keep it. If you kept it, you were passing and had to pay. On some games the rule was set that you had to keep drawing cards until you could play one. Each drawn card was a penny.

The way the pay-to-play was structured, it allowed players to sit out hands if they needed to go to the bathroom or check the mail or something. And people could drop by during the game, play a few hands and then leave without much disruption.

I had a little change purse filled with my change. Mostly pennies, although you would get other coins as people used the money in the pot to make change. Out of nickels but have a dime? Wait until someone else pays and then take a nickel, put in the dime. Only stuck with a quarter? Maybe another player could make change for you. There was no credit, but if you were running short of pennies a kind grandma might spot you a couple to finish a game. You owed those back.

The money was collected in a small dish, usually placed in the middle of the table, to the side of the game play. Somewhere everyone could reach it. I still look at small, useless dishes and think about what a good pot they would make.

The change purse never fluctuated in value greatly. These were low-stakes games. Whoever was dealing the cards got to pick the game. Deal goes around the table. The dealer picks the game and can decided if the cards will be cut or not. Player to the left of dealer goes first. Play goes around the table clockwise. When you are down to one card, you knock. If not, you owe a penny. A knock can be said as “knock” or you can hit the table with your knuckle.

Here are the games I distinctly remember:

Crazy 8s: Each player gets 8 cards (6 if more than 4 play). The deck is put face down in the middle. The top car is turned as the discard pile. Play goes around the table with each player trying to discard all of their cards. They can play the same suit or number as the top card showing on the discard pile. If they play an 8 (free to play any time), they can declare what they are changing the suit to. If you can’t play you pick a card. If you can play the drawn card, you do. And you avoid paying a penny. Or you pick cards until you can play, paying a penny for each. First person out of cards wins. 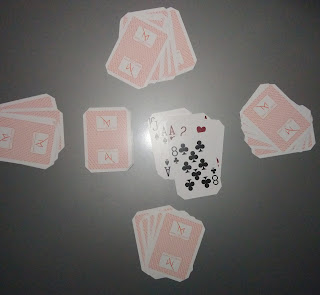 Up and down Broadway (different than up and down the river): Deal all the cards. Play goes around the table. A 7 is required to start play. If you don’t have a 7 and have to pass, you pay a penny. From each 7, the cards going up and down from it in numerical order are played until one player runs out of cards. First person out of cards wins. 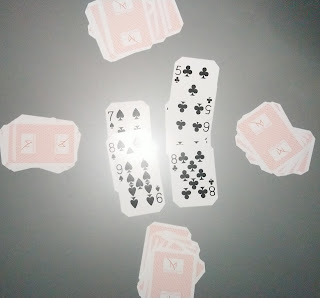 Aces in the corner: Deal 7 cards. Put the stack of remaining cards down and turn over four cards around it. Play goes around the table. You can either play down on the original showing cards, or you can put an ace in the corner. On the original showing cards, you have to play down and alternate colors of suits. So you could play a jack of clubs on a queen of diamonds or hearts, but not on a queen of spades or clubs. Cards are played up in matching suits on the aces. If you can’t play, you can move something on the board to avoid drawing a card. Like move a 2 from the original stacks to an ace in the corner. If a whole original stack goes away you can play a king in its place. 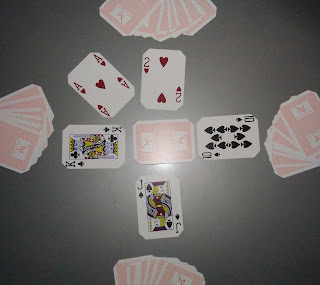 I’m struggling to remember if we played other games for money. There was some game we sometimes played which came with a huge table mat with drawings of cards on it, indicating where you had to play cards and in what combinations. I don’t remember what it was called. In high school, my friends and I played a lot of cards. We didn’t play cards for money but we played a lot of Spades and Pass the Crap. My parents loved to play bridge and I learned how from them, but we rarely played.

My favorite part of a good game of 2-player Spades is when you deal the deck. The first person looks at the top card. If they want it, they move the second card to the discard pile without looking at it. If they don’t want it, they discard it and have to take the second card. Then the next player does the same. They go in turns, each making a decision on two cards until each player has 13 cards. This way they each have some limited knowledge about what they’ve passed on, but don’t know for sure if the good cards are taken or if they’ve been discarded. Anyway, I love that part.

By a very young age, although now I’d hate to speculate what age it was, I was able to shuffle and bridge a deck of cards, deal them and do the simple math of the money in the pot. It made the strangers in St. Louis a lot less scary. It gave me something to look forward to and a little bag of money to covetously count when I was sad. Overall, even though I think Scrabble, Clue and other games are fun, everyone should be playing cards. For money.

Posted by Camille Sharon at 3:05 PM