We made a Christmas video for The Lola LaRue Variety Show! Just Lola hanging out, having a few drinks, wrapping some presents and singing a song.

We're working on the next batch of episodes for Series 2 and are aiming to have our next episode out for Valentine's Day.

Posted by Camille Sharon at 12:51 PM No comments:

Here's the last episode of series 1 of the Lola LaRue show. We've already started working on series 2, so new episodes will happen, probably early-ish in 2023.

It was very hard to not laugh while recording this.

Posted by Camille Sharon at 10:15 AM No comments:

The Lola LaRue Variety Show - Episode 5 - "Do the LaRue and Look Like Lola!"

Here's the next episode of the show I've been working on with my friend, Diana! We only have one more (next week) and then we're taking a little break to work on some new material.

Posted by Camille Sharon at 11:19 AM No comments:

Posted by Camille Sharon at 11:21 AM No comments:

Here's episode 3 of the Lola LaRue Variety Show, where Lola gets some visitors in her apartment/dressing room.

Posted by Camille Sharon at 11:13 AM No comments:

Hello! If you've tried to call or text me this past year, chances are good you got a reply that I couldn't talk because I was in a production meeting. What, you wondered, was I producing? Well, wonder no more. I was producing the Lola LaRue Variety Show! It's a new series (6 episodes long so far) that my friends Diana Costa, Lola LaRue and I created for YouTube.

I first met Lola way back in maybe 2009? Hard to remember now exactly. She was doing some gigs down in Hollywood and I would go see her late-night weekend performances. I became an instant fan and forced some of my friends to go see her. They also became instant fans. I hope you will also become an instant fan.

The first two episodes of her show are available now. Here are the links:

Posted by Camille Sharon at 12:00 PM No comments:

If you read my blog regularly, you probably read my New Year's Resolution wrap up when I spent the year reading books…and hated it. A piece of the puzzle of me finally fell into place in the past year, thanks to comedian Richard Herring and RHLSTP (Richard Herring's Leicester Square Theatre Podcast).

You see, Richard has a cognitive condition - which might not be the right way to describe it - called aphantasia. Part of his imagination is broken. He has no mind's eye. Ask him to visualize a tree, and he can't. He dreams and that all seems "normal," but daydreaming means something different to him.

Back when I was in high school, I had a best friend/boyfriend who was an artist. I would spend hours on the phone with him and I remember one time talking to him about what, at the time, I called "visual thoughts." I told him how scary it must be to have "visual thoughts," because I didn't have them. I assumed only a few people could actually visualize things. Lucky people who could then do things like draw from memory. I wasn't one of them.

Turns out, thanks to Richard Herring letting me know that not having visual thoughts put you in the minority and not the majority, I realized that I fell into that minority. I wouldn't say I'm 100% unable to visualize things, but from talking to people since learning about aphantasia, and reading about it, I'm much closer to the no visualization end of the spectrum than the other end, where people have the ability to hyper visualize things.

When I drift off to sleep, I can visualize things a little. That's when I work on the plots of my stories, or think about things I love, or daydream. The way I can sometimes imagine images when I'm awake I can best describe as someone holding the picture just out of my field of vision. It's on the side, in the periphery, or even behind me. I'm aware of it, but I can't look directly at it.

Apples are fruit. They can be basically green, red or yellow. They can be sweet or sour. They can be eaten raw, or are often cooked and added to pies. Seasoned with cinnamon. They can also be crushed to make applesauce and juice. I like the way apple juice tastes and often order it on planes. I have three apple trees in my yard. An apple a day keeps the doctor away. Ok. I'm ready for a follow-up question.

It is all words in my mind. If I want to remember something, I have to be able to recite it. When I learn tap routines, I memorize the steps, saying them, and then do them. Until I can say the order of the steps, I can't do them. When I learn music, I have to be able to say the chords or I get hopelessly lost. Everything I look at is converted to text in my brain. What does someone look like? I can only tell you the parts of their appearance that I've taken the time to convert to words. If I didn't look at someone and intentionally think something like "blue eyes," I will have no idea what color their eyes are. I cannot pull up their photograph in my mind and see what eye color they have. My memory is essentially spoken word.

I think this is why I don't like to read. The more descriptive the writing, the less interest I have. If a writer spends three pages describing a person's features, I'm not following along. I'm not creating a picture of the person in my mind. I banking important details in case they become plot important later, but I have no idea what that character looks like. I usually assign real-life people to what I read. I cast actors to play different roles. And all I see when I read a book is the words on the page.

I do slightly better listening to books because I can look at other things. But, as I've learned is the case with many of my fellow aphantasia people (aphantasiacs?) is that I would rather read non-fiction than fiction. I'd rather sit with the Audubon Field Guide than the latest novel by the hottest author.

I'd also rather write screenplays than novels. A screenwriter has to only put in plot important details and leave room for other creative people to inject their creativity into the project. It doesn't matter what kind of car you put in your script, you can just say "car." Unless you need the car to have some specific quality later, and then you can be more specific.

I think this might also be why I'm good at my job. I watch movies and write what I see. My imagination doesn't interject. I see what is there. And I think this might be why I'm good at figuring out how things are made/put together, how things work and how gears will turn. I also think this is why I don't have many memories of my very young life. I remember seeing photographs of places I've been better than remembering going to those places. I know I've been to New Zealand, Australia, Turkey, Germany, England, etc., but my "memories" are the stories my parents have told and the music we listened to.

A few friends have said things like, "Why didn't you tell me?" Well, I didn't know! And you couldn't tell! There is no decline in my ability to learn. I was able to get my Master's Degree with honors. I wasn't singled out. This isn't a disability in any way. It is just different than what apparently most of the people in the world experience.

I'm fine. I just hate reading and have to look at reference pictures to paint. I panic that I might not recognize people when I see them, but I don't think I have a problem with that. My subconscious brain remembers some things, even though it likes to keep them hidden from my conscious. 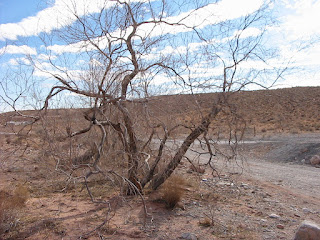 (A picture of a dead tree in the Nevada desert just because I prefer my posts to have at least one picture.)

I might write more about this in the future, but for now, thanks to Richard Herring to push in a puzzle piece of what it is to be me.

Posted by Camille Sharon at 5:25 PM No comments: